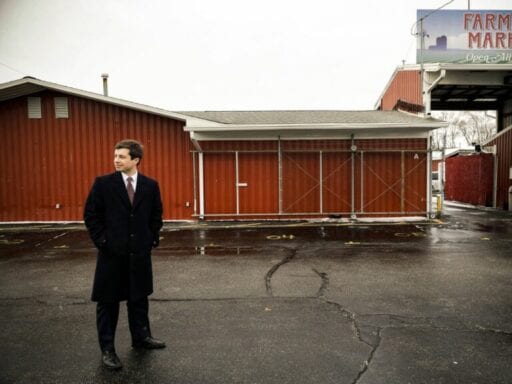 Share
Loading...
Sound Bend, Ind. Mayor Pete Buttigieg wants to make sure no part of the country is left behind in the transition to clean energy. | Nam Y. Huh/AP

So the urgency embedded in his new plan to combat climate change released Wednesday is fitting. “We’re running out of time. Experts tell us that we have 10 years to get on the right path, or global warming will reach catastrophic levels by 2050,” he wrote. “But the timeline that compels us to act isn’t set by Congress—it’s being dictated by science.”

Drawing on his experience as a mayor, Buttigieg’s strategy also includes a special focus on supporting towns and cities like South Bend in the clean energy transition. Every part of the country, he argues, deserves the chance to participate, whether that’s energy efficiency upgrades, job training for displaced workers, or resiliency against extreme weather. “It means tapping into the potential of rural communities to become part of the solution,” Buttigieg wrote.

The plan also raises a variety of economic tools to accelerate the shift toward a low-carbon future, like climate action bonds, creating a clean energy bank, and ending subsidies for fossil fuels. It also calls for US diplomatic and financial leverage on the global stage to push other countries to move aggressively to curb their emissions.

Though the field of Democratic contenders has begun to narrow, there are still 10 candidates that have qualified for the next official debate. And among those remaining, most have also put out their own comprehensive visions to address climate change. So while it’s become increasingly difficult to stand apart from the field, failing to put forward a climate change proposal at this point would have been a conspicuous omission.

Buttigieg will get a chance to make his case at CNN climate change town hall event on Wednesday.

The word “trillion” doesn’t appear anywhere in Buttigieg’s plan, but his campaign told Vox it estimates the government will spend $1.5 to $2 trillion for the proposal, in addition to investments in modernizing, roads, railways, water mains, and bridges. That’s relatively modest compared to plans from candidates like former Rep. Beto O’Rourke ($5 trillion) or Vermont Sen. Bernie Sanders ($16.3 trillion).

But for the price, Buttigieg expects the plan to create 3 million new clean energy jobs. He expects that money to motivate non-federal and private funding mechanisms as well.

In addition, Buttigieg proposes a variety of financial instruments to drive the transition toward cleaner energy including:

Climate change will impact every part of the country, and Buttigieg wants to make sure no one is left behind

Buttigieg’s climate change proposal also includes a number of ways to ensure that it’s not just the rich and more heavily populated parts of the country that get funding to protect themselves from climate-related disasters:

The proposal also calls for strengthening worker protections via unions and job retraining via a $200 billion transition fund for workers such as coal miners who would soon find themselves out of a work. This may be one of the most critical planks in the plan for building a coalition of support.

While unions are an important constituency for Democrats, some have been skeptical of proposals to radically reshape the energy sector like the Green New Deal. Buttigieg says he supports the Green New Deal, but a major test of his approach to it will be whether he can bring coal, oil, and gas workers on board.

TikTok’s US ban has been delayed another two weeks — or maybe forever
Why do memes matter?
The weekend in startling impeachment news, explained
Vox Sentences: A suicide bomber attacks an Afghan school
The untold story of the migrant “caravan”: how Trump’s border crackdown endangered immigrants’ lives
Ruth Bader Ginsburg says she plans to stay on Supreme Court for “at least five more years”