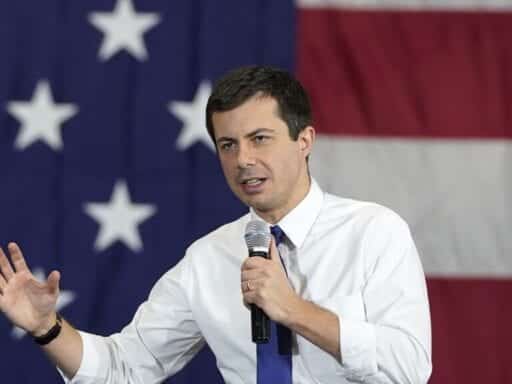 Pete Buttigieg released on Sunday an immigration plan that would reverse the Trump administration’s enforcement policies, push for a pathway to citizenship for unauthorized immigrants, and streamline the process of applying for asylum and other forms of legal immigration.

The South Bend, Indiana, mayor is one of the last in the Democratic field to release an immigration plan, and it largely mirrors those of other candidates. It’s now clear that the field has reached consensus on most issues, including ending President Donald Trump’s toughest anti-immigrant policies, creating a pathway to citizenship for the nearly 11 million unauthorized immigrants living in the US, strengthening protections for asylum seekers, and making it easier for immigrants to come to the US legally.

Buttigieg doesn’t have much of a record on immigration compared with candidates like former Vice President Joe Biden, who has had to answer for the Obama administration’s immigration policies.

In the Democratic debates, Buttigieg has talked about his immigrant father, who was born in Malta and came to the US for his doctorate. In South Bend, Buttigieg created a municipal ID program to allow unauthorized immigrants to open bank accounts and fill prescriptions; he also helped create a system of alerting residents of known US Immigration and Customs Enforcement (ICE) raids — but he’s even admitted that “a mayor can’t do much when it comes to immigration.”

Buttigieg has also struggled with Latino voters, one of the largest immigrant populations in the US, though immigration is not the only issue that determines Latino support.

His immigration plan, therefore, is the most detailed window into his thoughts on immigration that he has offered so far. It’s an area of policy in which the president has substantial executive authority, and given that both Trump and former President Barack Obama have exercised those powers liberally, Buttigieg is likely to do the same if elected.

Buttigieg, like Biden, has positioned himself as a moderate Democrat. And also like Biden, he hasn’t embraced some key progressive immigration proposals endorsed by the other frontrunners, Sens. Bernie Sanders and Elizabeth Warren, such as decriminalizing unauthorized border crossings and restructuring immigration enforcement agencies such as US Customs and Border Protection (CBP) and ICE.

Although Buttigieg doesn’t explicitly back those proposals, his platform offers other ways to make immigration enforcement more humane, some of which are unique among the Democratic field: He’d prioritize enforcement only for immigrants considered a risk to public safety, limit the use of immigration detention, and change the way immigrants are processed at the border.

What Buttigieg’s plan would do

Under Trump’s “zero tolerance” policy, he has aimed to prosecute anyone who crosses the border without authorization, including immigrants who pose no public safety risk.

Like other candidates, Buttigieg would instead direct immigration enforcement efforts to individuals who have committed serious crimes, those who have no asylum or humanitarian claims, and those who “circumvent our laws for profit,” including human traffickers and people who exploit immigrant labor.

He would use immigration detention sparingly, instead enrolling immigrants in programs offering alternatives to detention; he would also end for-profit detention facilities, which have been the site of some of the most egregious abuses of immigrants in recent years.

But unlike Sanders and Warren, Buttigieg doesn’t want to overhaul CBP and ICE, which are the primary agencies responsible for arresting and detaining immigrants — he would work within the existing enforcement system, and that means he would be able to rely primarily on executive authority to introduce reforms. But he’s proposing to shift responsibility for processing migrants at the southern border from CBP to the Department of Health and Human Services (HHS).

As the number of migrants showing up at the southern border reached record levels over the last year, CBP started holding them for days or even weeks in processing centers that weren’t designed to house people for more than 72 hours. There have been numerous reports of overcrowding, of migrants going for weeks without showers and sleeping on concrete floors with nothing but mylar blankets to keep them warm.

Instead, Buttigieg said he would create new HHS facilities designed for overnight stays and staffed with people who can deliver medical care (including mental health services), age-appropriate care, and emergency aid. He would also allow outside agencies and watchdog groups to regularly inspect them.

Under Buttigieg’s plan, asylum officers would be allowed to fully adjudicate asylum applications for immigrants in detention, rather than forcing them to go to immigration court to argue their asylum claims — a process that can take months or even years and is more adversarial. Under that process, immigrants would be entitled to a lawyer and would work with legal service providers to make sure they can access counsel.

Buttigieg proposes a revamping of the legal immigration system, too — but that would require bipartisan support from Congress, an unlikely prospect given that gridlock on immigration issues has never been worse.

As part of that goal, however, he would get rid of per-country visa caps, which have made it much more difficult for Chinese and Indian immigrants in particular to immigrate to the US. He would also nix the five-year waiting period for green card holders to obtain health insurance and food assistance, keep the costs associated with applying for citizenship low, and aid immigrant integration by, for example, promoting voter registration at naturalization ceremonies.

Buttigieg has a plan to cooperate with countries in Latin America to reduce the root causes of migration, though it’s not as bold as those of Biden or Warren. He’d reinstate about $450 million in aid to Central America, compared with Biden’s $4 billion over four years and Warren’s $1.5 billion per year. He is, however, one of the only candidates to commit to assisting Venezuelan refugees, who have fled economic and political crisis in their home country.

How Buttigieg would reverse Trump’s policies

Buttigieg’s plan aims to reverse various Trump policies: his travel ban on individuals from seven countries deemed to be security threats, the practice of family separations, and his cap on annual refugee admissions (to a historic low of 18,000), as well as the practice of keeping migrants trapped in Mexican border towns while they wait for decisions on their asylum applications.

He proposes to raise the cap on annual refugee admissions to 125,000 during his first year in office, and says he supports legislation that would set an annual floor of 95,000 admissions. That’s on par with what Biden and Warren have proposed (though Warren has pledged to raise the cap to 175,000 by the end of her first term.) Sanders, by contrast, has vowed to increase the cap, but hasn’t specified a number.

Buttigieg would also reinstate programs offering temporary legal protection to certain immigrants, including Deferred Action for Childhood Arrivals (DACA) and Temporary Protected Status (TPS), and extend additional protection from deportation to parents of DACA recipients. Trump has tried to roll back those protections, but court rulings have so far kept them alive.

During Thursday night’s Democratic debate, Buttigieg vowed to not only financially compensate the almost 5,500 immigrant families who were separated as the result of Trump administration policies, but also to offer them a “fast track” to citizenship. Though advocates and Democratic lawmakers have proffered similar proposals, it’s unique among 2020 Democrats so far.

“They should have a fast track to citizenship because what the United States did under this president to them was wrong,” Buttigieg said. “We have a moral obligation to make right what was broken.”

Here’s the full list of 2020 Emmy nominees
Aquaman first trailer: Jason Momoa is the Earth’s only, fish-whispering, hope
Trump’s own officials say 2020 was America’s most secure election in history
Jack Dorsey is giving millions to Colin Kaepernick’s criminal justice group
Thai boys speak publicly for the first time: “This experience taught me to be more patient”
The left’s gains in the 2018 Democratic primaries, explained in 3 charts