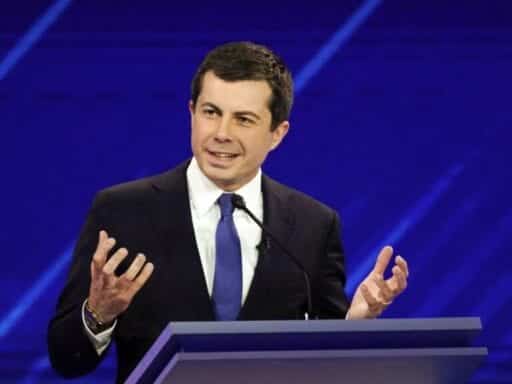 Share
Loading...
South Bend, Indiana, mayor and 2020 presidential candidate Pete Buttigieg has a “Medicare for all who want it” plan. | David J. Phillip/AP

Pete Buttigieg has released his first detailed health care plan on Thursday, designed to expand coverage, lower costs and offer Medicare “for all who want it” while stopping short of the single-payer Medicare-for-all overhaul preferred by Bernie Sanders.

In this presidential primary, center-left candidates like Buttigieg have been obliged to explain how they would expand US health care if they aren’t willing to endorse the Medicare-for-all plan supported by Sanders and Elizabeth Warren, which would set up a single government insurance plan to cover every American. Buttigieg’s agenda shares some of the same ideas that Joe Biden supports. He aims to achieve universal coverage through the introduction of a public option and more subsidies for private insurance, building off the existing system instead of razing it to the ground as a single-payer plan would.

Buttigieg is emphasizing choice — thus “Medicare for all who want it,” his spin on Sanders’s “Medicare for all” slogan — in laying out an agenda that allows employer-sponsored and individual private insurance to remain but gives all Americans the option of joining a government health program.

“The problem, Senator Sanders, with that damn bill that you wrote, and that Senator Warren backs is that it doesn’t trust the American people,” Buttigieg said at last week’s debate. “I trust you to choose what makes the most sense for you, not my way or the highway.”

Buttigieg would create an optional government insurance plan into which uninsured people would be automatically enrolled and people with employer-sponsored insurance would be permitted to join. He also wants to expand federal subsidies for private insurance purchased on the Obamacare marketplaces, making them more generous and lifting the income eligibility cap that currently leaves many middle-class families cut off from federal assistance. He covers other ground as well, proposing a fix for surprise medical bills and an out-of-pocket spending cap for Medicare beneficiaries.

The plan is more modest than what the most progressive candidates and voters support, which would be a single-payer system similar to Canada and Taiwan. But the Buttigieg plan is still ambitious and reflects the leftward shift of the Democratic mainstream: the more moderate candidates aren’t willing to scrap private coverage entirely, but they are still pushing for a much larger government role in providing health care to Americans.

The Buttigieg plan tries to achieve universal coverage — through automatic enrollment, the establishment of a public health insurance plan, and the expansion of federal assistance for people to purchase health insurance — while maintaining a market where private insurers and the government would compete for consumers’ business.

Here are the most important pillars of the proposal:

Buttigieg extends his scope beyond expanding coverage for the under-65 population with a handful of other notable provisions aimed at lowering costs for consumers:

There are essentially three health care positions for the Democrats running for president in 2020: 1) the ones who want to blow up the whole system for universal single-payer, 2) the ones who worry about the disruption of a single-payer system and its ensuing political fallout, and 3) those who try to split the difference, speaking instead to values like universal coverage.

Sanders and Warren firmly state their support for Medicare-for-all, a single-payer system that would put every American on a government insurance plan. The more moderatee Democrats have warned of the potential for political backlash if private health insurance is phased out and taxes are raised to cover a substantial increase in government spending. Buttigieg in particular has picked up the “Medicare for all who want it” slogan.

The idea, first exemplified in the Medicare for America bill and now reflected in Buttigieg’s agenda, is that any American would be allowed to buy into a government-run insurance plan. Biden has also backed a public option anyone can buy into. The employer-sponsored insurance that currently covers half of Americans, which would be eliminated under the Medicare-for-all bill, would remain if the employers and employees so choose but would now face competition from the government plan.

Buttigieg has framed his plan as a pathway to true Medicare-for-all. He has expressed a hope that Americans would choose the government plan over the “corporate” option — but emphasized the need for a choice.

Polling indicates people are generally happy with their current coverage, but they are also frustrated with out-of-pocket costs, which have been steadily rising. The moderate plans would seek to reduce out-of-pocket costs; Sanders’s single-payer plan almost eliminates them entirely.

For single-payer supporters, any halfway point still leaves for-profit insurance companies operating and doesn’t offer the same level of financial security (there would still be out-of-pocket payments) that their plan, proposing medical care free at the point of service, does..

Buttigieg clearly views Medicare-for-All as a step too far, but he still wants to propose a substantial change for a system that their party views as fundamentally broken.

Emmys 2020: The full list of winners
Why the game of Life used to have poverty, suicide, and ruin
4 winners and 2 losers from the 2019 State of the Union
Coronavirus isn’t transphobic. But America’s economic and health systems are.
The night sky is increasingly dystopian
How Trump is helping the baby formula industry mislead moms about breastfeeding