Peter King is the 20th House Republican to announce their retirement 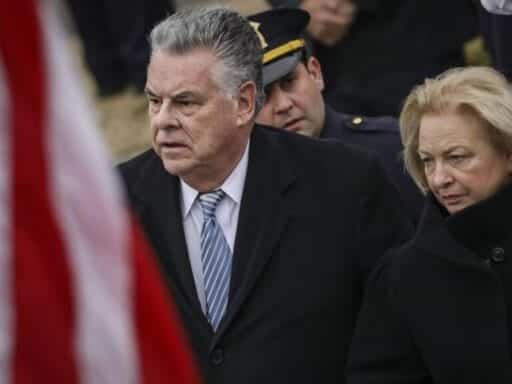 A growing number of representatives from both parties have announced plans to retire.

Rep. Peter King (R-NY), who has served in the House of Representatives for nearly three decades, announced his retirement Monday, becoming the 20th House Republican to retire ahead of the 2020 election.

“The prime reason for my decision was that after 28 years of spending 4 days a week in Washington, D.C., it is time to end the weekly commute and be home in Seaford,” King, who is 75, wrote in a statement. “There is a season for everything and [my wife] and I decided that, especially since we are both in good health, it is time to have the flexibility to spend more time with our children and grandchildren.”

King is an ally of President Donald Trump with his own history of controversial stances, from his support for the Irish Republican Army, to his claim that “80 to 85 percent of mosques in this country are controlled by Islamic fundamentalists,” to blaming Eric Garner rather than the New York City police officer who killed him for his death: “If he had not had asthma, and a heart condition, and was so obese, he would not have died from this.”

In late 2018, when many were condemning immigration officials for the deaths of two children in their custody, King offered praise while also insulting the country’s poor.

”These are the only two children that have died, certainly in recent memory,” he said. “Considering what does happen in housing projects … I think ICE has an excellent record.”

And he has been just as quick to protect Trump from allegations of wrongdoing, calling an FBI investigation into the Trump campaign’s ties to Russia “almost like a coup” and has called the arrest of former Trump campaign adviser Roger Stone “a police state tactic.” He has also derided the impeachment inquiry, arguing, “We can’t have the president of the United States, no matter who it is, being held hostage.”

According to NBC’s Kristen Welker, Trump was disappointed to hear of King’s decision when the two men spoke Sunday, and asked the lawmaker to run again. King told Welker that Trump eventually accepted that “it’s time.”

The representative who replaces King may not be quite as loyal to Trump — in fact, he or she may not be a Republican at all.

The Cook Political Report rates King’s Long Island district as likely Republican (R+3), but his margin of victory in 2018 was the narrowest it has been in decades, suggesting that a strong Democratic candidate facing a Republican rival lacking King’s name recognition and advantage of incumbency could flip the seat.

A growing number of House lawmakers are retiring

King’s retirement makes him the 20th House Republican to decide not to mount a reelection campaign in 2020. Eight House Democrats are also retiring; according to a Washington Post analysis, most of those Democrats are leaving safely Democratic seats, while about half the Republican seats are safe.

This presents Democrats an opportunity to expand their majority in the House (although they will also have to defend some seats they gained in swing districts in 2018), and also adds to a growing exodus, one that could become reminiscent of the wave of retirements that arrived ahead of the 2018 midterm elections.

Those elections saw the retirement of more than 50 representatives, the most since the 1992 elections.

During the 2018 cycle, Vox’s Tara Golshan explained that while there were a lot of reasons for the rash of retirements, they could all be summed up into one: “Congress sucks.”

“When I was there, it was a miserable environment,” James Wallner, a former congressional legislative director, told Golshan in 2018. “The sense of powerlessness was pervasive — everyone feels powerless including the leaders.”

To be fair, things are slightly different if you are a leader — not just of a committee, but a party leader, like Senate Majority Leader Mitch McConnell or House Minority Leader Kevin McCarthy. As New America fellow Lee Drutman has explained for Vox, party leaders are in complete control of the process:

Everything moves through party leadership, which is increasingly writing bills on its own, cutting out committees, and giving rank-and-file members no opportunity for input. Most members are kept in the dark until the last minute and then forced to vote on legislation they had no role in crafting, with no opportunity to even look at it until right before the vote.

But that’s led to less powerful members of Congress asking themselves, “‘I’m not doing anything — what’s the point of being here?’” Jason Roberts, a political scientist at the University of North Carolina Chapel Hill, told Golshan.

For House Republicans, this frustration has likely only been exacerbated by being in the minority. While in the majority during the first half of the Trump administration, they struggled to pass major legislation, but did eventually pass a significant tax reform law. In the minority, House Republicans have been unable to replicate that success, and have instead had to watch as Democratic priorities, from the sweeping reform bill HR 1 to the impeachment inquiry resolution have passed by significant margins.

Although the president still enjoys the support of his party, frustrations with his style and the pressures of the impeachment inquiry also are a weight on Republican lawmakers.

“Did any member of this conference expect that their job would start out every morning trying to go through the list of what’s happening in tweets of the day?” Michigan Rep. Paul Mitchell said to the Washington Post. “We’re not moving forward right now. We are simply thrashing around.”

That has made it hard to win elections in districts that aren’t solidly Republican, Coffman said, because being a Republican is now synonymous with being firmly pro-Trump. That may work in some districts, but the nationalization of House races — which were once more local affairs — doesn’t work everywhere.

And Trump’s declining poll numbers among Republicans, as well as polling finding a majority of Americans (including some Republicans) support the impeachment inquiry, might lead certain House Republicans to take care in tying themselves to the president too closely.

King, of course, has long made it clear he supports Trump, and took pains to state he wasn’t retiring because he worried he would be able to win the next election, writing, “my polling numbers are as strong as they have ever been and I have more than $1 million in campaign funds.”

He may well have been able to win a 15th term. But King’s district has been characterized as the sort of suburban area that is key to strategies for Democratic victories in 2020.

In 2020, a presidential election year, voter enthusiasm will be high — Gallup found that two out of three Americans said they were more enthusiastic about voting in 2020 than they had been in previous elections. And with high turnout, Democrats could do in 2020 what they were unable to do in 2018: flip King’s district.