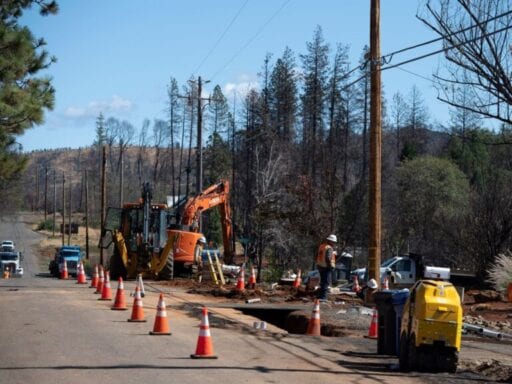 Share
Loading...
PG&E shut off power to 500,000 of its customers in the hope of preventing another fire as high winds pick up. | Robyn Beck/AFP/Getty Images

More than 500,000 are without power as California’s largest utility tries to avoid igniting another wildfire.

Pacific Gas & Electric, the utility serving more than 16 million people across California, shut down power to more than 500,000 customers early Wednesday morning with more outages scheduled in the coming days.

It’s a blunt response to the growing risks of disastrous wildfires brought about by a complex combination of suburban sprawl, poor land management practices, and climate change. And the shutoff is a stark example of the trade-offs that come from adapting to a warmer world.

The utility is calling this a Public Safety Power Shutoff (PSPS); the concern is that high winds could knock trees over into power lines, shooting off sparks that hit a stretch of land primed to burn. This week, warm, dry weather, ample vegetation, and strong seasonal Diablo winds that can gust at 70 mph have created the “recipe for explosive fire growth,” according to the National Weather Service.

This is a recipe for explosive fire growth, if a fire starts.

The number of customers that lose power could increase, topping 800,000, and the shutdown could last for days as red flag warnings remain in effect. (Our sister site Curbed has a list of all the areas affected by the power shutdown). It’s not just lights that are switching off; tunnels are also closing, threatening to snarl traffic.

Deliberately leaving hundreds of thousands of customers in the dark for days is a drastic action, and the shutdown will likely result in huge economic costs as businesses close.

I made a crude estimate of costs due to the PSPS that @PGE4Me has said it may conduct this week using the @lbnl Interruption Cost Estimator (https://t.co/fkAWC1LP7P). A PSPS for a representative 600k accounts that lasted just 24hrs would cause $1.8 billion in costs.

But the highest tolls of this outage will be borne by the most vulnerable: People who depend on medical equipment at home, whose jobs will be closed, and who face food insecurity without refrigeration.

The PSPS is a microcosm of the equity issues that are integral to climate change, that the people who contributed the least to the problem stand to suffer the most. And as average temperatures continue to rise, more difficult choices lie ahead for utilities, their customers, and public officials.

Though 2019 so far has been a pretty mild year for wildfires in California, the state suffered back-to-back record-breaking fires in 2017 and 2018.

Fires are a natural part of many western ecosystems, but the unusually devastating blazes arose from a number of converging human factors. One is that people — whether through fallen power lines, arson, or unattended campsites — have ignited 84 percent of wildfires in the United States, tripling the length of the fire season.

Another contributor to fire risk is that people are increasingly building closer to fire-prone areas. In California, which is facing a severe housing shortage, homes are going up near wilderness areas full of fuel as people get priced out of big cities. Running power lines to these homes often near forests and shrubland increases the risk of igniting a fire. The resulting blazes near these homes become more destructive with so much property in their paths.

Some of these risks can be mitigated by thinning vegetation and executing controlled burns. But pruning huge swaths of forest is expensive and dangerous work. Prescribed burns also pose their own costs and hazards, like poor air quality, so some communities are reluctant to use these tactics. Paradoxically, years of suppressing naturally-occurring fires to protect property has led vegetation in wooded areas to accumulate to unnatural levels, leaving a huge amount of fuel that can burn.

People are also changing the climate. Rising average temperatures have led western forests to dry out. This heat on top of years of drought has left forests vulnerable to pests like bark beetles. There are now approximately 149 million dead trees in California that could serve as fuel for a major blaze.

This year, California experienced a wet winter followed by an extremely hot summer, leading to a large crop of vegetation that crisped in the heat and stands ready to burn. So despite fewer fires this year, the risk remains high.

Climate change is clearly a threat to the utility business, but the heaviest costs will fall to those who can least afford it

PG&E filed for bankruptcy earlier this year after the utility was found liable for igniting multiple fires, including the Camp Fire that spread over 150,000 acres, destroyed the town of Paradise, and killed 86 people. In September, PG&E reached an $11 billion settlement to resolve these claims, the second such settlement. A third tranche of claims is still working its way through state and federal courts. (The company also paid a $65 million settlement last week in an unrelated case over allegations that it falsified records.)

The utility may not be the only contributor to wildfire risk in California, but since the company has been found financially liable for fires, it is taking some of the most direct action to avert future events.

However, part of the utility’s decision to conduct a PSPS also stems from policy decisions, explained Travis Kavulla, the former president of the National Association of Regulatory Utility Commissioners. He explained that PG&E essentially sells a product, electricity, at a government-set price. “And when that price is not worth the wildfire risk associated with providing service, or when the price does not support the investment necessary to make the service safe, it makes complete sense that they would flip the ‘off’ switch to particular sets of consumers,” Kavulla wrote in an email.

The result is that hundreds of thousands of utility customers will lose power through no fault of their own. The utility is balancing losing revenue against the risk of sparking another fire, but its customers stand to lose wages and face risks to health care.

But other long-term fire risk mitigation efforts have their costs and trade-offs as well. Trimming trees around power lines and removing dead vegetation are costly, especially over PG&E’s 70,000-square-mile service territory. Reporting from the Wall Street Journal showed that PG&E knew about the hazards of its aging infrastructure for years and neglected maintenance. But if the company takes on more aggressive maintenance and prevention work, those costs could end up being passed to their customers. The rising utility costs would again hurt the poorest the most.

Kavulla suggested that California regulators could open the market to more outside competition from other power providers, particularly to serve customers in high-risk areas when PG&E can’t meet their needs.

Relocating people from high fire-risk areas is also difficult because many who live in these regions can’t afford to live elsewhere. The town of Paradise, which was largely destroyed in the Camp Fire, had a median household income of $48,831, below the national median of $61,937.

So reducing overall fire risk while avoiding drastic steps like shutting off power to thousands of people would require years of coordinated work across local, state, private, and federal officials, a politically tedious and expensive endeavor.

Other parts of the country are facing their own difficult decisions as they cope with climate change impacts like extreme weather and flooding, as well as questions of whether to stay in place or leave, and who deserves the most help. Again, the people most vulnerable to these risks are often those with the fewest resources to cope, so as the climate continues to change, the risks will grow.

Harvard’s coronavirus response highlights how college closings are hurting low-income students
Oregon Republicans are still on the lam to avoid voting on a major climate change bill
The legacy of Katherine Johnson, NASA’s “Hidden Figures” mathematician
A champion of the unplugged, earth-conscious life, Wendell Berry is still ahead of us
The 9 best movies you can now watch at home
Jupiter at opposition: Monday is the best night of the year to look at the gas giant