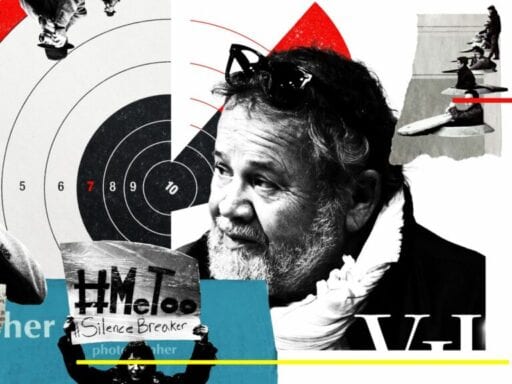 Amid sexual harassment allegations, a legendary photographer just resigned from a prestigious — and troubled — agency. But the industry’s reckoning is woefully incomplete.

Late Monday evening, VII (pronounced “seven”), one of the world’s premier photojournalism agencies, discreetly posted a terse, two-sentence statement on its website announcing that Antonin Kratochvil, the famed photographer and one of the organization’s founding members, had resigned. Any further inquiries, the agency said, “should be directed to Mr. Kratochvil.”

Kratochvil’s quiet resignation came on the heels of a bombshell report in the Columbia Journalism Review by Kristen Chick, in which several women accused him of groping and intimidating a number of female colleagues. (Kratochvil continues to deny all allegations.) Her reporting also surfaced accusations against the freelance photographer Christian Rodriguez, who allegedly made unwanted sexual advances toward women and pressured them to let him take nude photos of them; and detailed allegations of rampant sexual misconduct at the Eddie Adams Workshop, which serves as an important learning space for young photojournalists.

Over five months, Chick interviewed more than 50 women who collectively told a story of leading photojournalism institutions rife with bullying, where female photographers have accepted harassment as a cost of doing business, and a freelance labor pool where people are afraid to speak for fear of being labeled as difficult to work with. All of this as editors and directors have quietly “turned a blind eye.”

Almost immediately upon publication, the denials and deflections began.

When Chick reached out to editors at the organizations where this alleged harassment was happening, they denied knowing about it or downplayed the seriousness of the allegations. An editor at National Geographic said Rodriguez, the freelance photographer, was “greatly exaggerating his relationship with us,” and Chick reports that the magazine has opened an investigation. Alyssa Adams of the Eddie Adams Workshop told Chick that “[i]n the past, when [sexual harassment] wasn’t an issue … people pretty much know who the support people are, they would talk to the support people.” Now that sexual harassment was a “real issue,” she said, the workshop had created a code of conduct for its participants.

In the case of VII, Kratochvil was suspended immediately. Officially, VII says it knew nothing: “the circumstances surrounding the allegation of physical molestation made in the [CJR] article against founding member Antonin Kratochvil were shocking to us.” However, in a detailed follow-up to Chick’s article, Diane Smyth of the British Journal of Photography argues that the agency was aware of accusations against Kratochvil and others for some time. These discrepancies have yet to be officially addressed.

There were stories about the toxic culture of photojournalism before Chick’s reporting, including recent articles that brought down the famed sports photographer Bill Frakes and National Geographic editor Patrick Witty. But nothing was as comprehensive and pointed as Chick’s piece. After witnessing a wave wash over Hollywood, the media, politics, and corporate America, Chick’s story should have hastened our industry’s own #MeToo moment. That hasn’t happened — and the reason is bigger than a few bad actors.

When an industry is as dominated by men at every level and at nearly every major institution, a toxic culture toward women is the inevitable result. Thus, it’s disappointing but not surprising that many in the photojournalist community — whose job, ironically, is to bear witness to injustice in the world — want very much to look away.

The numbers are damning

As a photojournalist and Vox’s visuals editor, I notice one thing at every major Senate hearing: the glaring gender imbalance of the photographic press. In a cluster of several dozen men, I can usually count about three to five women.

The Washington press corps is illustrative of the industry more broadly. An internal report by the Associated Press, one of the world’s largest news photo agencies, found that 86 percent of its photo staff around the world are men. (Nearly 80 percent of its US photo staff are white.) The pool of Reuters staff photographers and contributors, which totals around 600, is 80 percent male. (Getty Images, another leading photo agency, declined to comment on its diversity numbers.)

Women Photograph has been collecting data on who is credited with the photos on the front pages of major newspapers around the world. Last year, men took an overwhelming majority of lead photographs in the eight largest English-language newspapers.

Since 2000, only four women have won a Pulitzer Prize for breaking news photography, and three of them shared the prize with a man. (We omitted entries won by a newsroom staff.) Over the past 60 years, only eight women received the Pulitzer for feature photography, while six women have received the Pulitzer for breaking news photography. Since 1955, the World Press Photograph of the Year has gone to only four women. In 2018, 85 percent of the entrants for the World Press Photo Awards, photojournalism’s biggest international honors, were men.

These numbers are damning for an industry responsible for visually representing the world and its most vulnerable people.

“It’s more than just different chromosomes and skin colors in the room — it’s different ways of seeing the world,” says Andrew Mendelson, an associate dean at the CUNY Graduate School of Journalism in New York. “If women are only shown as victims of conflict as opposed to having agency, then that might limit the way they see their role in shaping the world.”

Think about some of the most iconic images of the 20th century: Eddie Adams in Vietnam, Kevin Carter’s image of a Sudanese child being stalked by a vulture, John Filo at Kent State; what does it mean for us to see our world mostly from the point of view of white men?

An industry obsessed with documenting violence and desperation

I was 21, smoking a joint and poring over Inferno, a book of brutal images from global conflicts by the renowned war photographer James Nachtwey. It captured some of the darkest corners of humanity — civil wars, famine, crushing poverty — but they were making an argument: Do not look away. I was transfixed, and I didn’t want to be a bystander. It was the moment I decided to become a photojournalist.

Nachtwey, as it happens, was a founding member of VII and integral to shaping its editorial focus. He is one of the living legends of photojournalism, but the longer I’ve been in the industry, the more I see how his life’s work also demonstrates the myopias of our profession. There is a style of photography that he popularized — dramatic, high-contrast, black and white, almost always depicting someone in a moment of desperation. It’s a style that invokes urgency to the audience, but also a sense of remove. He’s applied this style to impoverished brown children, people with heroin addiction, and survivors of war, and because that aesthetic won awards, it became widely imitated.

“I hate to say white men shoot all one way, because they don’t,” said Nina Berman, an acclaimed documentary photographer and associate professor at the Columbia University Graduate School of Journalism. “But there is a style of photography created and championed over the years that valued specific methods of working, aesthetics, and distance.”

She went on: “It’s basically an othering that comes from the belief that the man behind the camera has a privileged artistic sense, an inherent superiority despite rarely knowing the local language, or living in the region or neighborhood he’s covering, or having any sustained connection to what he’s seeing.” It’s no wonder, Berman said, that we’ve ended up homogenizing struggle with repetitive visual tropes.

That homogenization of our visual language means we have become fascinated with abjection and violence, and because those images we make have an unmistakable moral urgency, we presume that those “bearing witness” to all this darkness — to shock our consciences — must themselves be noble.

Perhaps it’s this sense of righteousness in our work that prevents us from having a consequential reckoning with the worst behavior in our field; after all, aren’t we the good ones?

“This happened on their watch”

Anastasia Taylor-Lind, whose photography has appeared in National Geographic and the New York Times, was in her London flat when she read Chick’s article uncovering the misconduct at VII. Chick detailed an incident at a VII event when Antonin Kratochvil “slid his hand between [Taylor-Lind’s] buttocks … and pushed it forward until he was touching her vagina over her clothing.” Taylor-Lind was stunned as she read the article: She learned that before her, Kratochvil had been accused of harassment by the respected photojournalist Stephanie Sinclair in 2008 and another woman in 2005. Taylor-Lind had thought she was the only one.

She also learned from the article that several members of VII had reportedly known about the harassment complaints against Kratochvil. “If those complaints had been taken seriously, they may have prevented me from being harassed,” she told me. “I was the youngest and only female present during that meeting. This happened on their watch.” (Sinclair officially left VII in 2016 but is bound by a nondisclosure agreement, so she didn’t provide comment.)

It’s worth sitting in Taylor-Lind’s revelation for a moment: If this can happen for years to some of the most respected women in photojournalism without consequence, where does that leave young freelancers coming up in our industry?

Taylor-Lind follows this thread even further. “If a man believes he has the right to touch a woman’s body without her permission in the work environment, how does that man behave if he’s working in Iraq and has an 18-year-old translator?” she wonders. “How might he behave with her? And if something happened to her, where would she go? Who would believe her? What happens when the same man has to photograph a 15-year-old girl who has been raped?”

VII did announce reforms in response to Chick’s article and they appear to be significant: along with adding more female members and a new code of ethics, it has “created an internal female-led reporting structure that can be used to report inappropriate behavior inside the agency, as well as out in the field, free of retaliation.” Other agencies have followed suit with their own attempts to protect women.

But are these correctives enough if the collateral damage is leaving a string of traumatized and diminished female photographers in their wake? If saving the reputations of a few men and photojournalism’s premier institutions comes at the cost of silencing women like Stephanie Sinclair under NDAs and deflecting responsibility, what does that say about our journalistic credibility and integrity?

Since Chick’s piece was published, Taylor-Lind says she’s been disgusted by the industry’s overall inaction. “I now understand that the most dangerous position for people to take is one of the bystander,” she said. “There are more bystanders than people who have been abused.”

One photographer told Chick that “Sinclair told her about being harassed by multiple members of VII,” but Kratochvil remains the only one named. That means there are potentially other bad actors who are being protected, and thus potentially other women who are at risk. It is ironic that Sinclair, whose work chronicles injustices toward women and girls, cannot tell her own story. The rest of us are luckier: We can choose to speak out, to ask the hard questions, to work to reshape photojournalism for a more just age. Or, at very least, not become bystanders.

15 states have decriminalized — but not legalized — marijuana
How our Google searches have changed in this presidential election
Why it matters that IBM is getting out of the facial recognition business
Vox Sentences: A few questions for Matthew Whitaker
What you need to know about Facebook’s latest privacy tool
Kids’ brains may hold the secret to building better AI