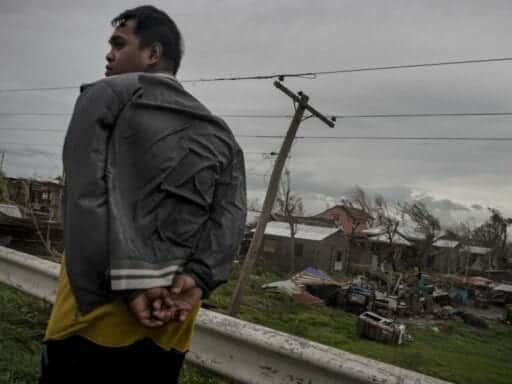 Dozens were killed, many in a deadly landslide in the Philippines.

Typhoon Mangkhut made its deadly march across the Philippines, Hong Kong, and southern China over the weekend, unleashing flooding, dangerous winds, and landslides, and killing dozens.

Mangkhut was the world’s most powerful storm this year so far, according to meteorologists, reaching sustained winds as high as 170 miles per hour — about the equivalent of a Category 5 hurricane — and spanning as wide as 550 miles. (Hurricanes and typhoons are both tropical cyclones, but called different names based on the regions where they form; hurricanes exist in the Atlantic or northeastern Pacific, and typhoons originate in the northwest Pacific.)

The typhoon slammed into the region around the same time Hurricane Florence was battering the Carolinas. Florence was a Category 2 storm (winds between 96 and 110 miles per hour) when it made landfall — though the slow-moving storm and its relentless rains created different hazards.

Here are some scenes of Mangkhut’s devastation as it ripped through the region.

The Philippines got hit first — and the hardest

The typhoon slammed into the northern Philippines early Saturday morning, where the death toll stands at 66, though it’s expected to rise. Many were killed by landslides, including more than 34 miners who were buried when a mountain collapsed on a bunkhouse in the remote mining town of Itogon.

Dozens remain missing, including children who were working at the illegal mining site, Philippines authorities said. The mayor of the town, Victorio Palangdan, said it was likely that those who had not yet been recovered were dead. “I am 99% sure the people there are dead,” he said, according to the Guardian.

Tens of thousands are said to have been affected by the storm, and the government is still trying to assess the extent of the damage.

Mangkhut was the strongest storm to hit Hong Kong in decades

After devastating the Philippines, Mangkhut veered toward Hong Kong, making it one of the strongest storms to make landfall there in decades. The storm had weakened, with sustained winds of about 96 miles per hour, but the still-powerful gusts blasted out windows and downed trees, crippling the city and its transportation network.

Storm surge threatened the coastal areas, and reached as high as 11 feet — which broke a more than century-old record, according to the BBC. The seaside town of Heng Fa Chuen was particularly hard-hit, with rapid flooding and wind damage.

Hundreds of people were injured, though authorities said no one had been killed.

China deals with a weakened Mangkhut

Mangkhut arrived in China late Sunday into early Monday morning, killing at least four people and forcing millions to evacuate from the province of Guangdong and other coastal areas.

Macau, the autonomous region also in its path, was forced to shut down its casinos, as the area was inundated with flood waters.

The storm was downgraded to a tropical depression on Monday afternoon as it moved west from Guangdong, on the southern coast of mainland China.