Photos: what Hurricane Michael’s destruction looks like on the ground 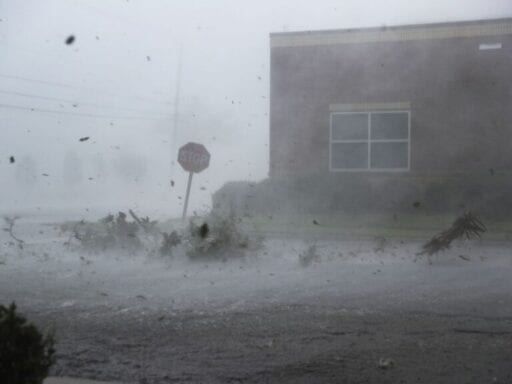 The storm hit as a very powerful Category 4 with 155 mph winds.

Hurricane Michael made a dramatic landfall Wednesday afternoon as a fiercer-than-expected Category 4 storm, and the risks are far from over.

After landing near Mexico Beach and Panama City in Florida, Michael continued to move. The storm is expected to enter Georgia early Wednesday evening as a Category 3 or 2, tearing up houses in its path and taking out power for hundreds of thousands of people. There’s still a big inland flooding risk too. As Michael makes its way inland, it will dump rain over Alabama, Georgia, and the Carolinas (which are still recovering from the inundation of Hurricane Florence).

Local news reporters, storm chasers, photo journalists, and meteorologists are beginning to share images from the ground on what was left in Michael’s wake. It looks like a tornado hit some of these areas. And the situation will remain dangerous as the storm, which is still a hurricane, pushes inland.

Complete destruction to the northeastern side of this bank in Panama City, FL. #HurricaneMichael pic.twitter.com/d1eG2ymZVZ

This is on the bayou in Destin. This was a backyard. #HurricaneMichael #fcnstorm @FCN2go pic.twitter.com/fjGWiuBvC2

Downtown Panama City proper got hit way harder than Panama City Beach. Not shocked as it was hit by the right eyewall. This is catastrophic damage here. @weathernetwork @StormhunterTWN #HurricaneMichael pic.twitter.com/Y7rUyHE7Wj

A few of the photos from Marianna, Fl. These were taken in the middle of eye. When it came through, it sounded like a loud freight train. Prayers for everyone involved with this storm. #HurricaneMichael eye #hurricanemichael pic.twitter.com/KpyrcfdpjW

The structure was obliterated by #HurricaneMichael. This is the most damage I have personally seen from winds in a hurricane. pic.twitter.com/3kwGkmoekj

The Fox News moment that revealed a dangerously confused president
Is a high-ranking House Democrat about to lose his primary?
Congress leaves town without voting on fix to stop family separations at border
Maxine Waters and the trope of the “angry black woman”
How Russian hackers stole information from Democrats, in 3 simple diagrams
Trump lawyer’s response to the Bolton bombshell is that it doesn’t matter