Photos: Where was Trump — and who was he with — before testing positive for the coronavirus? 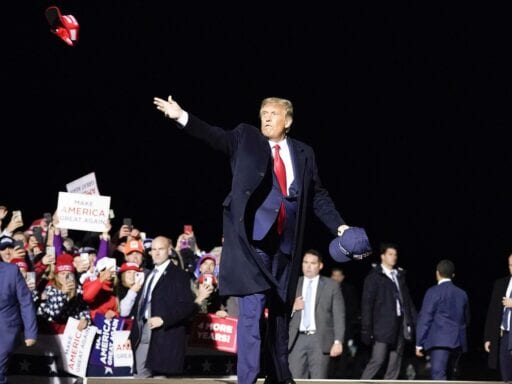 Before Trump tested positive, he came into contact with a lot of people.

President Donald Trump and first lady Melania Trump have tested positive for SARS-CoV-2, the virus that causes Covid-19, he announced Friday morning. With any case of Covid-19 — including the president’s — one of the first questions that ought to be asked: Who else has the infected person been in contact with?

This question is critical: The virus tends to spread through clusters of people, through close personal contact, and, in some poorly ventilated indoor environments, through the air. The president could be part of a large chain of transmission both in and outside the White House. Knowing who he and his close contacts — as well as other White House staff who have tested positive for the virus, like aide Hope Hicks — have been in proximity to could help stop a Covid-19 cluster from growing even larger.

In general, scientists believe a person can become infectious about two days before they get symptoms. (Here’s a helpful chart outlining the average course and infectious period of the illness.) That’s a huge reason the outbreak has grown to pandemic proportions: The virus can spread before a person realizes they are sick, or when they just feel slightly sick.

Other people may never feel the symptoms of an infection, and could still potentially pass it on though it’s believed the risk for asymptomatic spread is lower than for presymptomatic spread. Also to note: Most people with the virus don’t pass it on to others. Instead, much of the spread happens in groups where many people get infected at once.

After a person starts to feel ill, they can be infectious for a week or more.

When we look at the viral load dynamics & contact tracing studies, those who are infected are very infectious for a short window, likely 1-2 days before and 5 days following symptom onset. No transmission documented so far after the first week of symptom onset. (7/n) pic.twitter.com/DmTVh4ur4O

The New York Times reports Trump has experienced mild symptoms: “At a fundraiser he attended at his golf club at Bedminster, New Jersey, on Thursday, where one attendee said the president came in contact with about 100 people, he seemed lethargic.”

So what else has Trump done this week, and who has he been in close contact with? Oh boy, it’s been a busy one, according to photos.

During his speech, Trump pushed misinformation about the coronavirus.

Trump uses lies and misleading comparisons with Europe to try to obfuscate from the fact that the US has the most coronavirus deaths in the world by far pic.twitter.com/0Vthqjp0Vp

President Trump began his day with a Rose Garden ceremony where he introduced Judge Amy Coney Barrett as his nominee to replace the late Ruth Bader Ginsburg on the Supreme Court.

President Trump and the first lady spoke with Judge Barrett and her family.

Following the event, Trump walked through the Palm Room with Barrett. On Friday, the White House reported that Barrett tested negative for the coronavirus. The virus can take a week or more before a person starts showing symptoms or starts testing positive. So a negative test does not mean a person will never, eventually, test positive.

During his speech, Trump claimed falsely that states that took the fewest public health precautious are doing better managing the coronavirus pandemic than the ones generally run by Democratic governors that were more active in implementing regulations to slow the spread.

“The [states] are doing well are the ones that opened it up,” Trump says of the coronavirus, falsely (Florida opened extremely prematurely and has been one of the hardest-hit states) pic.twitter.com/PMkKbrIyoR

During the news conference, Trump exaggerated how many people came to his rallies over the weekend, while also disregarding that cramming so many people — many not wearing masks — into a small space during a pandemic is widely regarded by public health experts as a bad idea.

“Whether it was 35,000 or 30,000, those crowds are massive” — there were 4,000 tops people at Trump’s rally on Friday night in Virginia according to local reports pic.twitter.com/6BBnPYU0Bw

Trump held a White House event during which he was photographed inspecting the Lordstown Motors 2021 endurance truck, an electric pickup truck, in front of the White House.

Trump and Vice President Mike Pence then delivered an update on the nation’s coronavirus testing strategy in the Rose Garden.

At one point, Trump joked with Adm. Brett Giroir, the White House’s coronavirus testing czar, that “I hope you don’t test positive.”

On Tuesday, President Trump and first lady Melania Trump departed the White House for the first presidential debate in Cleveland.

During the debate, Trump mocked Joe Biden for regularly wearing masks and dismissed criticism of his pandemic rallies, saying “people wanna hear what I have to say.”

Biden looks like he can barely believe it as Trump insists that masks aren’t necessarily good for slowing the spread of coronavirus pic.twitter.com/okZf2pVsw0

During his speech in Duluth, Trump mocked Biden for taking public health precautions at his campaign events.

President Trump waves after stepping off Air Force One upon arrival at Andrews Air Force Base in Maryland following campaign events in Minnesota.

President Trump returned to the White House after traveling to Bedminster, New Jersey, for a fundraising event.

According to the New York Times, because Hicks tested positive on Wednesday, by the time Trump attended the fundraiser on Thursday, he knew he had been exposed to the coronavirus, and he was even experiencing symptoms — but that didn’t stop him from mingling with about 100 people anyway:

The president has had what one person described as cold-like symptoms. At a fund-raiser he attended at his golf club at Bedminster, N.J., on Thursday, where one attendee said the president came in contact with about 100 people, he seemed lethargic.

A person briefed on the matter said that Mr. Trump fell asleep at one point on Air Force One on the way back from a rally in Minnesota on Wednesday night.

The event is indoors and most of the audience isn’t wearing face masks. There are more than 200 people here. pic.twitter.com/oiZJn2sDvJ

Later Thursday — just hours before he announced on Twitter that he and Melania tested positive — Trump called in to Sean Hannity’s Fox News and explained the situation by saying, “it’s very, very hard when you are with people from the military or for law enforcement, and they come over to you, and they want to hug you, and they want to kiss you, because we really have done a good job for them. And you get close, and things happen.”

“You get close, and things happen … I just went out for a test … because we spend a lot of time with Hope” — asked about Hope Hicks testing positive for coronavirus, Trump says he was just tested pic.twitter.com/Rr7Kd5YfWR

A view of the White House on Friday morning after news that President Trump and first lady Melania have both tested positive for coronavirus.

Joe Biden will use the Defense Production Act in his anti-coronavirus effort
Gavin Newsom’s biggest accomplishment as governor yet: a $1.2 billion cash plan for the poor
No, Biden did not call Black people “superpredators”
Joe Biden just snagged a surprise victory in the Texas primary after a last-minute surge
Trump’s denial of his coronavirus failings will be “one of the biggest propaganda battles in America...
Vox Sentences: RIP INF