Piers Morgan made fun of Daniel Craig for carrying his baby. The response from dads was adorable. 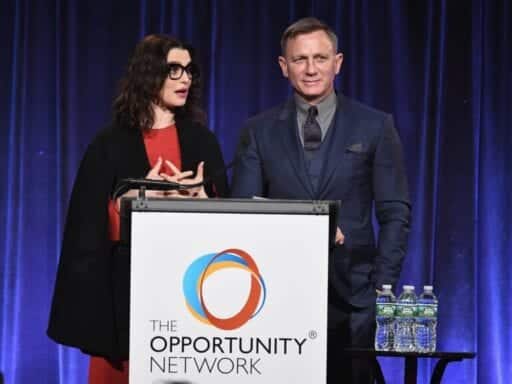 Piers Morgan, the TV host known for feuds with celebrities from J.K. Rowling to Ewan McGregor, has now taken aim at a new target: dads who carry their babies.

On Monday, Morgan spotted a photo of actor Daniel Craig wearing his baby in a carrier. Apparently scandalized, he took to Twitter, calling Craig #emasculatedBond:

The tweet brought up a number of issues, not least of which is the fact that 007 is a fictional character, while Daniel Craig is a real person, who has a new baby daughter with actress Rachel Weisz.

Many fathers were also disturbed by Morgan’s claim that carrying one’s child is somehow emasculating, and some responded by proudly sharing photos of themselves with their offspring. Morgan’s tweet was an example of the stereotypes that can discourage dads from being involved parents and leave moms with an unequal share of childrearing duties. But the responses from loving fathers showed that plenty of men are willing to challenge those stereotypes — even if it means putting on an Elsa costume.

Morgan’s tweet raised the ire of numerous men, who resented the implication that there was anything unmanly about caring for one’s child. Actor Chris Evans wrote that perhaps the tweet came from a place of insecurity:

You really have to be so uncertain of your own masculinity to concern yourself with how another man carries his child. Any man who wastes time quantifying masculinity is terrified on the inside. https://t.co/9jsHZ3WKRn

Meanwhile, many dads took the opportunity to share photos of themselves with their kids, masculinity intact. Economist and New York Times contributor Justin Wolfers posted a proud photo with his baby and invited others to do the same:

Count me as a joyous member of Team #DadsSnuggleYourKids.

If other dads want to join in, I’m sure your photos will only make this a happier thread. (And no matter what @piersmorgan says, your ‘nads won’t fall off.) pic.twitter.com/UhbA2wvwP2

What many saw as dad-shaming turned to dad-celebrating as men shared pictures of themselves doing activities like pumping iron with their kids:

I carry this guy around all day we go for walks & runs, lift weights, go grocery shopping, go to the park, cook dinner, do squats, lunges, pullups, train other ppl…I’ve never been more of a man @piersmorgan #dadlife #emasculatedBond pic.twitter.com/BhpfH0W1lW

Others remarked on the hands-free convenience that a wearable baby carrier can provide:

All in on team #emasculatedBond. Because being a dad with 2 hands is free god damn amazing pic.twitter.com/IZcIwRrJCv

Meanwhile, actor and retired wrestler Adam Copeland took the chance to show off his dress-up skills:

This is me wearing an Elsa dress after Lyric asked me to wear her Mom’s Halloween costume. I look ridiculous. But who cares? That’s what you do for your kids. I’m sure ⁦@piersmorgan⁩ would find this emasculating. I say only if you’re uncomfortable in your masculinity. pic.twitter.com/kDOvnw4pz2

The Bond tweets weren’t a total surprise coming from Morgan, who has been criticized in the past for making transphobic comments and for calling Women’s March participants “rabid feminists.” He’s also known for his Twitter bellicosity — last year he got in a Twitter feud with author J.K. Rowling over President Donald Trump’s executive order on immigration.

In the case of #emasculatedBond, he soon doubled down, arguing that he’s not against men carrying their children, just using wearable carriers (or “papooses,” a Native American term commonly used in Britain) to do it.

I just expressed a genuinely held opinion that papooses are emasculating, embarrassing & unnecessary – and the virtue-signalling world’s gone bonkers. https://t.co/EvPJFPVBiz

He also tried to get President Trump, whom he calls a friend, to join the argument:

Do you have a view about papooses, Mr President @realDonaldTrump?
Everyone else seems to be getting very worked up about them.
I don’t really have you down as a papoose kinda guy, but then you’re full of surprises.

At press time, the president had not responded, which is probably good for everyone.

Morgan’s tweets were representative of a serious issue: Child care, and especially caring for young babies, is too often perceived as unmanly. In a 2016 Pew survey, 53 percent of Americans said moms do a better job caring for a new baby than dads, even if you take breastfeeding out of the equation; 45 percent said moms and dads are about equally good at parenting, and just 1 percent said dads do a better job.

Perceptions like these can mean moms end up doing more child care, whether or not they want to — in 2016, moms did an average of 14 hours a week of child care, compared with eight hours a week for dads, according to Pew. And an unequal balance of child care at home helps contribute to the gender pay gap, which is especially severe for moms.

Wolfers, for his part, hopes that the responses to Morgan’s tweet might help challenge stereotypes around fatherhood and masculinity.

“I really loved seeing the long thread of dads snuggling their kids. And it struck me as deliciously subversive,” he told me.

“After all, we all snuggle,” he said. “But we really don’t see many images of it, which is why I think the world will be a better place if more blokes get to see other blokes snuggling. It’s good for us, it’s good for our babies, and it’s good for showing younger blokes what masculinity really means.”