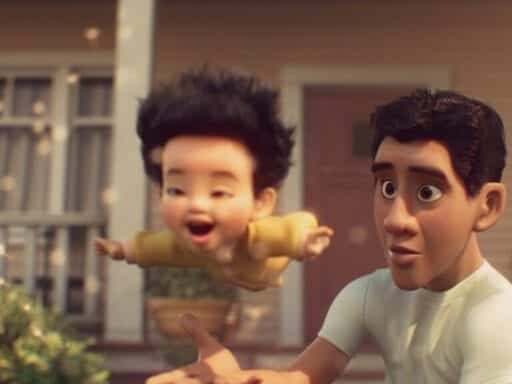 Float is about the fear of not being able to protect someone you love and learning to let go.

If you’re one of the lucky subscribers that managed to get Disney+ working on your device of choice on launch day, give yourself seven minutes to watch Float.

Written and produced by Pixar animator Bobby Rubio, Float is one of the studio’s six SparkShorts featured on the streaming service. SparkShorts are similar in vein to the short films that precede a Pixar feature; they are executed in a shorter amount of time and with a smaller budget than Pixar’s usual features but offer their creators more artistic freedom.

Float is about a dad who finds out his new (extremely cute) son can, in fact, float. The problem is that as his son begins to float, the people around him react to his floating prowess with fear. And so his father is forced to choose whether to keep his son’s talent hidden to fit in, or let those on the ground stare and gawk.

There isn’t much dialogue in Float. Instead, facial expressions and body language carry the story: A small shift in posture or the way a frown sharpens an entire face wields so much emotion in the short.

“It’s based on my own personal story of my son,” Rubio told an ABC News affiliate about the film. “In the story, the father is dealing with a son that floats, which makes him different from other children.” Rubio dedicated the short to his son.

Depending on your own personal experiences, Float’s core story could be a story about assimilation and growing up as a minority (it’s the first time Pixar is featuring Filipino American characters, which hits close to home for this writer), or it could be about what it’s like to feel different from those around you.

What stands out either way is how Float taps into the human instinct to fiercely protect someone you love, the worry that the world out there won’t see them the way you do, and the hope that that big scary world will love this person as much as you do. That sounds like a lot of ground to cover in seven minutes, but Float doesn’t just drift by — it soars.