Plague journals and the need to capture time 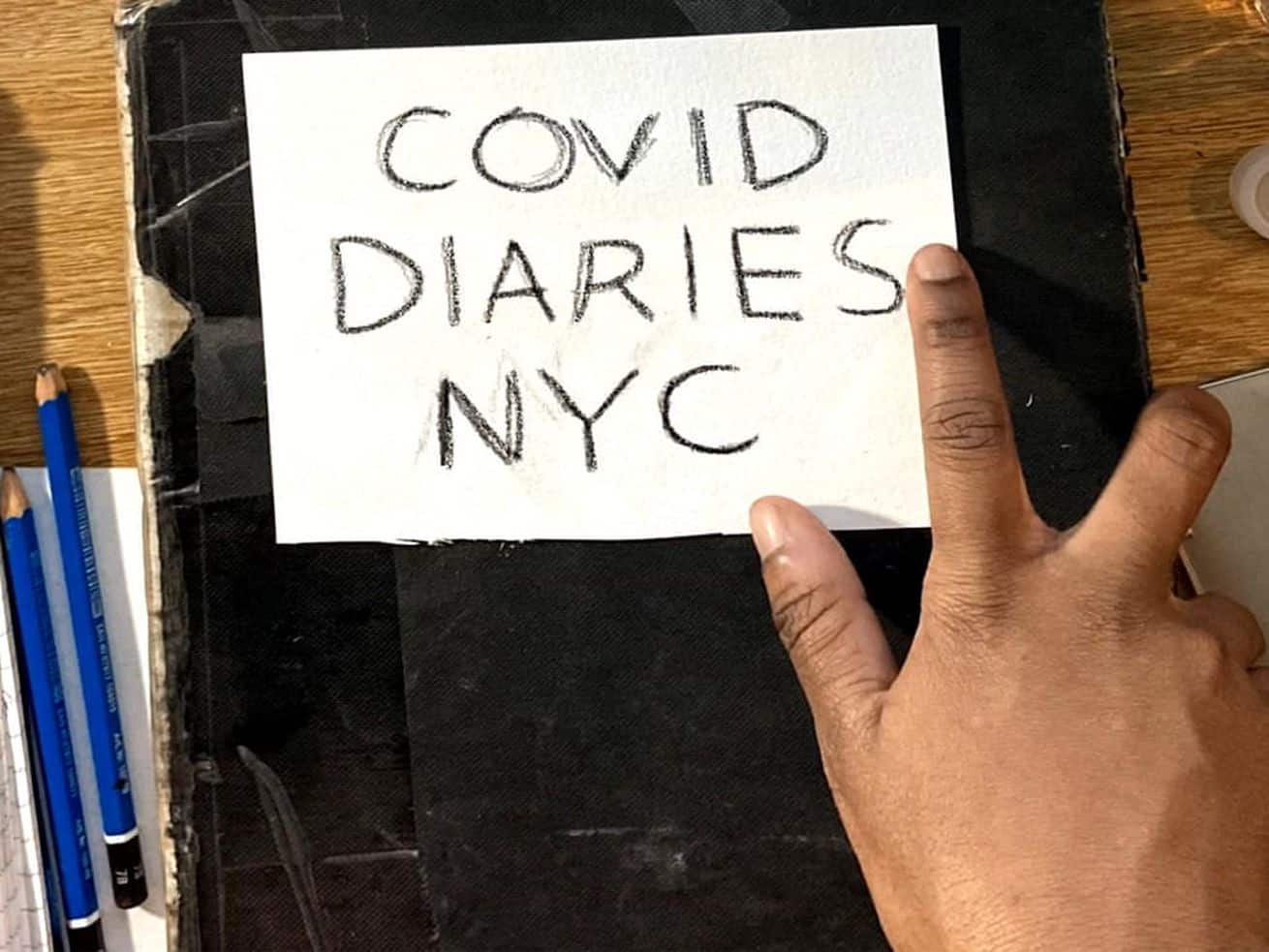 Why do we preserve the scary, endless pandemic days?

The five young filmmakers of HBO’s Covid Diaries NYC refuse to put a happy face on the pandemic, and honestly, that’s a relief. When the coronavirus slid from headlines into their very real lives last spring, they picked up cameras and started recording what was happening around them. With the aid of a Manhattan nonprofit, the Downtown Community Television Center, the five directors (ages 17 to 21) capture the well-grounded fears of essential workers and their families, the mental health tolls of isolation and dread, and the impossibility of escaping a virus that has reached pandemic proportions.

That very act — recording what was happening, as it was happening, from their points of view and narrated in their voices — makes them part of a long history of catastrophe diarists. For centuries, shattering events of epic proportions have provided a reason for people to pick up a pen, or a camera, and start recording. It’s the first draft of history. And it’s more raw, less prone to moralizing, more resistant to neat little narratives of triumph. What you get in a diary is not just events, but the rush of emotion that accompanies them.

In Covid Diaries NYC, the results are harrowing. Each roughly 8-minute short film, compiled into one collage-style feature, was shot from roughly April 2020 through the early summer, when unrest following the police killing of George Floyd added a new layer to the anxiety for some and provided others with an outlet for pent-up energy.

We meet Marcial, who lives in Manhattan with his grandmother. Marcial’s grandmother is a building super who spends even more time hauling trash around for the building’s residents now that they’re at home all the time. “That’s the only way for us to live in Manhattan,” he says. “We’ve gotta pick up garbage for rich people.”

High schooler Aracelie was diagnosed with mental health conditions just before the pandemic and now, cooped up and separated from her friends, she’s struggling to remain afloat.

Camille’s father, who works at the MTA fixing train doors, watches friends get sick and then gets sick himself; Camille and her mother hole up in the basement and listen to him cough through the ceiling.

Shane is the only white participant, which means Covid Diaries NYC mirrors Covid-19’s disproportionate effect on New Yorkers of color. His mother, a preschool teacher, sees her worst fears materialize when she’s furloughed. And his family, barely squeaking by already, discovers that the change of scenery that comes with driving west toward his father’s home state of Wisconsin doesn’t change their collective panic.

And Rosemary watches in anger as people who refuse to wear masks board the bus that her father drives. Her parents tell her of their struggles to make a better life as immigrants. By the end of her segment, the family is watching as Covid-19 creeps in on their friends and family. Rosemary’s grandmother has tested positive, too.

None of the segments provide snappy conclusions — or, really, any conclusions at all. We are left hoping these five are okay, all these months later. I hope Camille’s father and Rosemary’s grandmother got better, that Shane’s family found a way to get back on their feet, that Marcial has found an outlet for his energy, that Aracelie is stable. Covid Diaries NYC leaves us wondering.

But that is what it’s like to read a diary, which doesn’t, and can’t, wrap up neatly. It starts when the diarist decides to start, and ends when they finish or, more likely, lose interest. There’s no clear-cut and easy conclusion to a diary. Which is, when I think of it, a lot like a pandemic.

In their most basic form, diaries are simply a way to record what happened and what the diarist thought of it, to make sure time doesn’t simply slip away. I’ve always been terrible at keeping diaries on paper, but I know people who’ve done it for years, and I envy them. They regard it as a kind of therapeutic practice, a way to work through the day’s emotions, informational intake, and events. To process existence, really.

In this pandemic, the diaries have proliferated, too. For some people, they’re a way of simply taking things one day at a time. Ben Goldberg, a renowned jazz clarinetist, started releasing daily, dated improvisations on March 19, 2020; though they are no longer a daily practice, he is still posting new ones on Bandcamp a year later. Sometimes they’re dedicated to someone who has died or who’s having a birthday, or bear cryptic names. Goldberg calls the project “Plague Diary.”

The Portuguese novelist Gonçalo Tavares did the same thing in his own medium for a while. The New York Review of Books published several installments of “Pandemic Journals” from notable writers, though that endeavor petered out, too; the last one was in May 2020. Early in the pandemic, many other publications followed suit.

People sometimes just keep diaries for themselves (and retailers were quick to capitalize on that urge). But there’s always the feeling that they’re also for history. And given the nature of our contemporary plague — the way it has kept us away from one another and changed every communication into something awkward and screen-mediated — the need to make those musings public felt like more than just an option. It’s also a service to humanity. When it still seemed like the pandemic would last a manner of weeks or maybe a few months, the notion that we might forget what it was like to live this way still seemed like a possibility. (Were we ever so young?)

But to historians and librarians, the goal of a diary is less to preserve the experience for ourselves than for future generations. The New York Public Library, for instance, was among the institutions that started collecting pandemic diaries in audio form, soliciting entries from anyone who wanted to contribute as a way to ensure “that people today, along with future generations, can better understand our world and each other.” It’s still collecting them.

At schools, colleges, and universities all over the country, teachers encouraged or required students to keep diaries. At UC San Diego, a final project in professor Claire Edington’s history of public health class required students to keep plague diaries, which will be archived in the university’s library. Edington noted in an interview with UCSD’s newspaper that the diaries were a way to make clear the social conditions that often surround pandemics, and how those narratives play into creating a more just and equitable world moving forward.

The Covid diary keepers are just the latest iteration of plague diarists, of course. During the Great Plague of 1665, nearly 100,000 people died just in London, and Samuel Pepys was there to journal through the whole thing. His entries are a mixture of fear and just going about his daily business, which feels more than a little familiar to us now. They’re so detailed that they’ve become a basis for historians of 17th-century England trying to reconstruct the milieu now. And in 1722, Daniel Defoe published A Journal of the Plague Year, a fictionalized journal purportedly written by a survivor of that same 1665 plague; it’s so deeply researched that people still argue about whether it should be considered something other than fiction.

Such journals give us an insight into the blend of the mundane (I had yogurt for lunch) and the terrifying (the sirens haven’t stopped for days) that make up the unending, anxious tedium of plague times. They resist the tendency of narratives that may be woven later, both by artists and by powerful people seeking to bend the story in their own direction, to tie the tale in a neat bow. Or to extract a triumphant tale of victory over death. Or to disregard the daily beats of life in favor of some other meta-narrative. Diaries remind us that our lives, our long years, are made up of days and events and emotions — even in a pandemic.

Watching diaries arise during this pandemic year, I found myself thinking of something that isn’t strictly plague-bound: the artist On Kawara’s Today series. I’ve seen pieces of it in various museums around the world, and it’s always striking. Starting on January 4, 1966, Kawara made a painting every single day, consisting simply of the date in white painted onto a solid dark background. He varied the language and grammar of the painting depending on what country he was in that day. The colors varied at times, too, and each is hand-lettered. The pieces are mostly quite small, but occasionally he made them huge (as in July 1969, when the moon landing occurred). If he couldn’t finish the painting on the date depicted, he’d destroy it. Ultimately, he made more than 1,000.

Whenever I look at the paintings, I am reminded that while a little information about them comes through in each painting, for the most part I don’t know what that day was like for Kawara. The meaning largely resides in the maker, who might look at it and revisit the day’s emotions, activities, and epiphanies. Even the plague diarist can’t record everything that happened and everything they felt on a given day. The diary is itself an object that evokes something different for everyone who looks at it.

And Covid Diaries NYC is no different; having lived through the same time the filmmakers are chronicling, I remember where I was, too. When Aracelie cries on the phone to a friend that “I feel so many things and nothing at the same time … it’s like I won the lottery of bad luck,” well, I know just what that feels like. I remember that day. (It’s still here, sometimes.) That we may look back at these moments and count ourselves lucky or even raise an eyebrow at our former selves doesn’t make that experience less real. The plague diaries we’ve all been keeping, in one way or another, are a record for history — but they’re also for our future selves. Not to remember something we can’t forget, but to recall that life happens, and then, it keeps going.

The fight over letting Texans under age 65 vote by mail, explained
Photojournalism needs to face its #MeToo moment
What people get wrong about herd immunity, explained by epidemiologists
What’s next after the Trump-Kim summit? An expert explains.
Oprah says she wants to hear “both sides” of the American Dirt debate on appropriation
The Underground Railroad is a towering series about the ways slavery still infects America