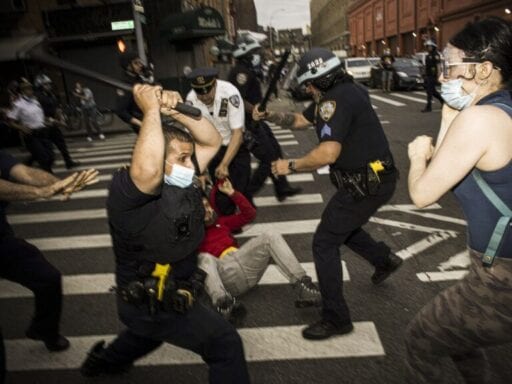 Protesting during a pandemic is a risk. But so is the status quo of police violence.

America’s crises are boiling over, one into another. Amid the coronavirus pandemic, masses of people are taking the streets to protest police brutality after the death of George Floyd in Minnesota, and other victims of racial violence.

These two stories are linked. They are both public health stories. The link is systemic racism.

As the Covid-19 crisis continues, it’s also become clear that black communities, and other communities of color, have suffered a disproportionate burden. Law professors Ruqaiijah Yearby and Seema Mohapatra recently explained this in detail in the Journal of Law and Bioscience:

These racial and ethnic disparities in COVID-19 infections and deaths are a result of historical and current practices of racism that cause disparities in exposure, susceptibility and treatment.

Many racial and ethnic minorities, Yearby and Mohapatra write, have been classified as “essential workers,” and are unable to work from home, leave their job, or access paid sick leave. They live in denser housing and more often polluted communities than whites — a result of years of racist housing policy that puts them at greater risk during a pandemic. And when they do get sick, their access to health care is often limited (as is their ability to pay for it).

Can the mass protests alleviate the Covid-19 burden on these communities? Not immediately. And there is a real risk of making it worse. “The ongoing protests will increase risk of transmission,” Majumder says. But even so, she and many other health experts argue the protests are necessary. (There are ways to reduce the risk of spreading Covid-19 at a protest. Read about them here.)

“We can’t compare these two tragedies directly — but they both are public health crises that are operating at immense scales,” she says. “And in the case of black Americans, they’re interrelated, too. To me, these protests are about structural racism.” And that racism allows police brutality to persist, as it allows disease to spread.

Many other epidemiologists, doctors, and infectious disease researchers have also defended the current protests, highlighting the inextricable link between the heavy toll of Covid-19 on black communities and the history of racism:

1/ Those who earned big platforms from #covid19– your silence on racism will be deafening.

They are deeply interlinked

Angry commenters are trying to “gotcha” me on this tweet so let me be clear:

Yes, I condemned the anti-lockdown protests. Yes, I support the #BlackLivesMatter protests. No, those aren’t contradictory views. COVID is a public health emergency. So is racism. We need to fight both. https://t.co/ilZHpcS5Te

For the record, my personal opinion is that some injustices are too great to remain silent, where risks become acceptable because the damage they cause outweigh the benefits of not taking them. Epidemic racism meets that threshold. #BlackLivesMatter

The forces that put many minority communities at risk during a pandemic have also put them at risk of police violence. Years of diminished economic opportunity, of marginalization, of structural racism, have led to both.

“In almost any way you measure it, the American criminal justice system is prejudiced against black Americans, and black people are much more likely to be subjected to state-sanctioned violence in the US compared to white Americans,” Vox’s Dylan Scott writes. Similarly, by almost every measure, black Americans face much larger risks when it comes to public health. They suffer heart disease, diabetes, asthma, and obesity in disproportionate numbers, too.

Right now, the news is filled with images of mass gatherings, at a time when social distancing should still be exercised. And more Covid-19 infections may come out of it. This is rightfully concerning. But that concern can exist alongside the concern of violence and death that black communities face, pandemic or not.

But, at least, for now, the goal of the protests is the same goal as the Covid-19 pandemic: saving lives.

The pandemic has exposed America’s clean water crisis
Top Trump official reportedly said Ted Cruz has a likability problem that could cost him his Senate ...
We’re failing in the opioid crisis. A more serious approach would save lives.
Vox Sentences: A “peace spring” that’s anything but
The Chris Murphy Doctrine
The trial begins for the ex-officer who shot her unarmed neighbor Botham Jean