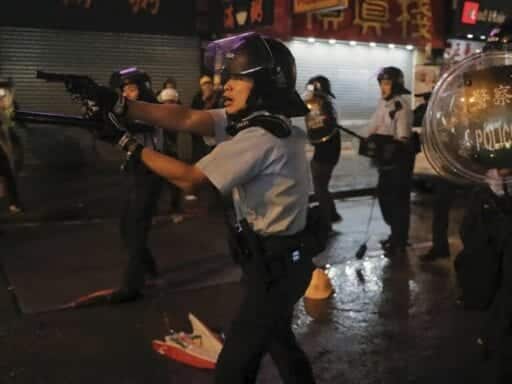 Share
Loading...
A police officer points their gun at protesters during an anti-government demonstration in Hong Kong on August 25, 2019. | Kin Cheung/AP

Police used water cannons for the first time, and one fired a warning shot in an escalation of force following a week of mostly peaceful protests.

Anti-government protests continued for the twelfth straight week in Hong Kong Sunday, but were marked by an escalation in police tactics. Tensions between police and protesters have been building for some time, but the past few weeks — particularly last weekend’s protests — marked something of a reset as demonstrations proceeded peacefully.

That peace was shattered this weekend as officers deployed water cannons for the first time and as one officer fired live ammunition late Sunday.

Following a takeover of Hong Kong’s airport and a melee in a subway station that saw officers using tear gas underground in early August, the relationship between protesters and police had declined to an all-time low. Protesters denounced what they called “police brutality,” arguing officers were responding to mostly peaceful demonstrations with overwhelming force. Officers argued protesters were creating a public safety risk; and government officials both in Hong Kong and mainland China began referring to demonstrators as “rioters.”

Those tensions were lowered last weekend when nearly two million Hongkongers marched peacefully through the city. However, following another day of peaceful protests this Sunday, violence erupted late in the day as a subset of the protesters deviated from an approved route, and as some defaced a building they said served as a safe harbor for mysterious white-clad attackers who beat demonstrators a few weeks ago.

The police response came to a head when one officer drew his weapon and fired a shot. According to Radio Television Hong Kong (RTHK), the shot was meant as a warning. Two protesters reportedly dropped to their knees to beg the officer not to visit any violence on the demonstrators.

Riot police arrived as back up after journalists and others confronted the officer for answers after he fired a warning shot.

Sunday marks the first use of a firearm at the protests. Police have drawn their service weapons before — perhaps most notably at the airport protests — but have always holstered them before firing.

The pro-democracy protests kicked off in late March in response to proposed amendments to Hong Kong’s extradition law that would allow people accused of crimes to be extradited more easily to other countries, including those with less transparent criminal proceedings than Hong Kong. “Notably, that would include mainland China, a country that arbitrarily imprisons its citizens if they displease the government,” writes Vox’s Jen Kirby:

Critics worried that China would take advantage of this law to arbitrarily detain Hongkongers — such as those who openly dissent against the Chinese government or advocate for human rights. One pro-democracy lawmaker called it a “dragnet over all of Hong Kong.”

The amendments would apply retroactively, meaning thousands of people who may have angered mainland China with a supposed past crime could be at risk of facing trial there.

The extradition rule changes were particularly fraught because China is accused of kidnapping people from outside its borders — including from Hong Kong, where it isn’t supposed to have jurisdiction — and essentially disappearing them to China. That would normally violate international law. But this bill would give China legal cover to do so.

Over the last 12 weeks, protesters have developed five central demands of their government, chief among them, getting rid of the extradition bill. They also demand their government not classify their movement as a “riot” — a legal term which carries up to 10 years in jail for those charged with it — and that the police release all protesters who have been arrested so far. They want for an independent inquiry into Hong Kong police, and are demanding universal suffrage for all Hongkongers.

At the heart of these demands are tensions over China’s “one country, two systems” policy that is meant to grant Hong Kong some degree of autonomy. As Vox’s Rachel Withers has explained:

For some years now, Hongkongers have responded to what they see as Beijing exerting more control over their autonomous region with protests. During the 2014 Umbrella Revolution, tens of thousands of people occupied major Hong Kong streets for two-and-a-half months to demand electoral freedom.

But these latest protests have marked a new chapter in Hong Kong’s pro-democracy movement: at least 2 million Hongkongers have participated in at least one demonstration to date, and the Chinese government, after ignoring the protests for several weeks, has begun to respond — by launching a disinformation campaign about the movement.

What comes next for Hong Kong

Beijing has shown no willingness to acquiesce to any of the protesters’ requests beyond allowing Hong Kong’s Beijing-backed chief executive to temporarily suspend debate on the extradition bill. And it has also begun deploying troops to the mainland’s border with Hong Kong.

Protesters also are refusing to back down — their protests have so far continued for 12 consecutive weeks, and turnout for street demonstrations has remained high.

A 26-year-old protester, Grace, told Vox’s Zeeshan Aleem she believes a rapidly approaching holiday could mark a major turning point in the movement:

Whether Beijing will act ahead of that date isn’t certain, but the anniversary does pose a problem for Chinese President Xi Jinping.

As Vox’s Jen Kirby points out, “It’s a bad look to crush a popular movement if you’re trying to celebrate the greatness of your country. On the other hand, it doesn’t look good to have an entire city spending weeks leading up to your anniversary challenging your authority and risking their safety for democracy.”

For now, however, the standoff remains, and therefore the protests are likely to continue until either some demands are met, or China acts to end them with force.

The convenience of American amnesia