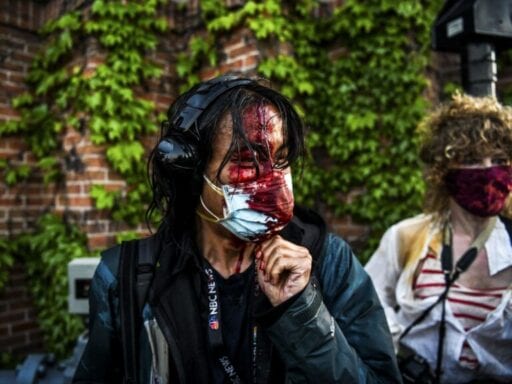 Share
Loading...
A journalist is seen bleeding after police started firing tear gas and rubber bullets into crowds near the Fifth Police Precinct in Minneapolis, on May 30. | Chandan Khanna/AFP via Getty Images

Though police were responsible for most of the violence, some protesters got in on the act too.

On Saturday night, photojournalist Linda Tirado was shot in the eye by a rubber bullet while covering an anti-police brutality protest in Minneapolis — one of more than two dozen incidents of journalists experiencing violence while covering the recent demonstrations.

Tirado says she’s permanently blind in her left eye. (She is thankful she uses her right eye to take photos, so the injury is not career-ending.)

an update: I am permanently blind in my left eye, and the docs absolutely refuse to let me go back to work for they say six weeks. I’m definitely not allowed to be near smoke or gas.

Across the country journalists have been targeted by police, facing arrest, detention and violence, including being pepper sprayed and shot by rubber bullets. Journalists were targeted by police in the Ferguson protests in 2015 and during the civil rights era, and that pattern of violence and arrests continued into this weekend’s protests.

“Targeted attacks on journalists, media crews, and news organizations covering the demonstrations show a complete disregard for their critical role in documenting issues of public interest and are an unacceptable attempt to intimidate them,” said Carlos Martínez de la Serna, program director at the nonprofit advocacy group Committee to Protect Journalists, in a statement Saturday. “Authorities in cities across the U.S. need to instruct police not to target journalists and ensure they can report safely on the protests without fear of injury or retaliation.”

A reporter and her camera crew were shot at by police in Louisville. Vox’s Alex Ward has more detailed coverage of the Louisville incident here.

LIVE ON @wave3news – something I’ve never seen in my career.
An armed officer shooting directly at our reporter @KaitlinRustWAVE and photographer @jbtcardfan during the protests in #Louisville.
My prayers are going out to everyone tonight.
Such a scary situation for all. pic.twitter.com/Ipg0DjFIXu

Ali Velshi and his MSNBC camera crew were shot at by Minneapolis police live on the air while covering a peaceful protest.

Ali Veshi and his CNN crew come under fire from #Minneapolis police with tear gas and rubber bullets.

“There was absolutely no provocation. The police just drove up, split the crowd in two and started firing in both directions.” pic.twitter.com/GTXKU1fTdz

#GeorgeFloyd Protests: CBC in Minneapolis#BREAKING The curfew is in effect but protesters are still out so police started tear gas and rubber bullets at them.

People have been hit including our colleague, CBC Senior Correspondent Susan Ormiston. pic.twitter.com/N8XcXaAyHH

Two members of a Reuters TV camera crew were hit by rubber bullets in Minneapolis Saturday.

Two members of a Reuters TV crew were hit by rubber bullets and injured. https://t.co/cxFmi4QJoR pic.twitter.com/ORFeVxAOYN

Reporter and photojournalist Sarah Belle Lin was hit in the thigh by a rubber bullet fired by police while covering protests in Oakland, California, Saturday evening.

I was hit by the police by in the inner thighs. I am injured. I repeated my First Amendment rights. Oakland #GeorgeFloyd protest. pic.twitter.com/1Gm6Se1LQ8

A man with a video camera and a press helmet was filmed by CNN getting shot with rubber bullets by Minneapolis police Saturday.

A man with a video camera and a PRESS helmet runs after being hit by… something… apparently some sort of pellet fired by police pic.twitter.com/OpH2Q60ry4

This is the moment Minneapolis Police fired on our CBS News crew with rubber bullets. As you can see, no protesters anywhere near us- we all were wearing credentials and had cameras out. Our sound engineer was hit in the arm. #cbsnews pic.twitter.com/UAy7HYhGnL

Police in Minneapolis are firing on us (press) with rubber bullets. Our sound engineer John Marschitz was hit. He is ok. We were not standing within 500 feet of any protesters at the time, and we had credentials displayed and cameras out. #cbsnews pic.twitter.com/Ai6Qd8gLjz

On Rodeo Drive in Santa Monica, California, an ABC7 reporter and his crew were hit with tear gas Saturday.

“We’re getting hit by tear gas!” Live coverage from field reporters from @ABC7 in Los Angeles as protests rage through the luxury stores of Rodeo Drive.

Several Detroit Free Press reporters were pepper sprayed by Detroit police Saturday, including one who held up a press badge while police targeted him.

Several of our @freep journalists got pepper-sprayed tonight by Detroit Police, one directly in the face as he held up his media badge. A photographer had her livestream camera slapped out of her hand by another DPD officer as she tried to do her job. This is not OK. See this: https://t.co/PMq8IAnawi

KSTP reporter Ryan Raiche was with a group of media in Minneapolis before they were tear gassed and pepper sprayed by police Saturday.

Myself, photographer, and producer just made it back to the car. We were with a group of media and thought we were in a safe spot. We kept saying we’re media. Police tear gassed and pepper sprayed the entire group. Everyone ran. It was insane. It happened so fast. pic.twitter.com/Wl3Fzzlsnw

VICE News correspondent Michael Adams reported that police raided a gas station where several members of the press were taking shelter. He said police threw him to the ground and pepper sprayed him.

Police just raided the gas station we were sheltering at. After shouting press multiple times and raising my press card in the air, I was thrown to the ground. Then another cop came up and peppered sprayed me in the face while I was being held down. pic.twitter.com/23EkZIMAFC

On Friday morning, CNN reporter Omar Jimenez and his crew were arrested live on the air in Minneapolis. Vox’s Matthew Yglesias has more detailed coverage here.

HuffPost reporter Christopher Mathias, who photos show with his press badge clearly visible to officers, was arrested while covering protests in Brooklyn Saturday evening. He was later released and in good condition, according to several of his HuffPost colleagues.

Confirmed that this is @huffpost reporter @letsgomathias getting arrested — I didn’t catch when they first apprehended him but it was incredibly violent. His press badge is clearly visible. pic.twitter.com/ob3FvEzkiK

Minneapolis-based reporter Madeleine Baran tweeted that a Minneapolis police officer pointed a weapon at her and did not lower it when she identified herself as a reporter. The incident prompted her to leave and stop reporting on the protest.

A Minneapolis police officer pointed a weapon at me at @sfreemark’s heads, while we were standing on Nicollet and 32nd covering the protests. I yelled that I’m a journalist. He did not lower his weapon, so we ran. Calling it a night.

Journalist Simon Moya-Smith was pepper sprayed and arrested after being told “Roll on your side, Mr. Journalist,” by a Minneapolis police officer Saturday.

I was pepper-sprayed then arrested last night by Minneapolis PD even after identifying myself as a reporter MULTIPLE times:

CNN commentator Keith Boykin tweeted that he was arrested by NYPD Saturday.

Police weren’t the only people targeting journalists this weekend

But it was unfortunately not just police targeting journalists over the weekend. Fox News reporter Leland Vittert and his crew were harassed, assaulted, and chased off the scene near the White House in Washington, DC, Friday. Their camera was broken in the process.

“Vittert and the crew were punched and hit with projectiles as they fled, and a Fox News camera was broken when a member of the mob tried to grab it.” https://t.co/scwxYvIb1s

A crowd surrounded, defaced, and smashed windows at CNN’s Atlanta headquarters Friday, though it should be noted that there is a police precinct headquarters inside the CNN Center.

The police and security are now blocking the entrances to the CNN Center as the crowd’s intentions had become clear.

This is view from the News 2 Chopper on their Live Feed:https://t.co/YBVCxZWGYR pic.twitter.com/KHPfFVOsKG

CBS5 reporter Briana Whitney was grabbed by a man on live television while reporting on protests outside Phoenix police department headquarters.

THIS IS NOT OKAY.

This is the moment I was intentionally tackled by this man while I was on air trying to report what was happening during the protest at Phoenix PD headquarters. I feel violated, and this was terrifying.

Let us do our jobs. We are trying our very best #azfamily pic.twitter.com/bHXwbnDVPB

The lesson Democrats should take from Florida’s $15 minimum wage vote
The Biden administration has labeled Myanmar’s military takeover a “coup”
There’s only one presidential candidate who we know accepts money from foreign sources
How to watch the 2019 Super Bowl on streaming and TV
Poll: 79 percent of parents with school-age children support a return to in-person schooling
The UK government’s own assessment of what a no-deal Brexit looks like is dire