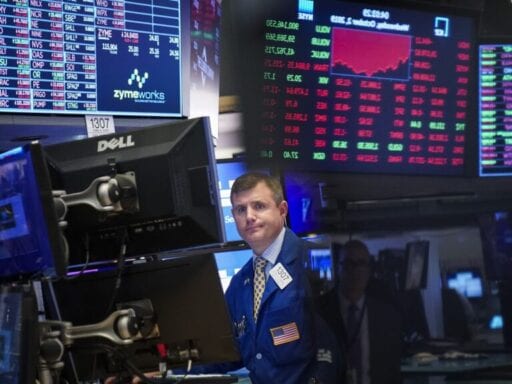 Share
Loading...
Traders and financial professionals work on the floor of the New York Stock Exchange (NYSE) at the closing bell on October 2, 2019 in New York City. | Drew Angerer/Getty Images

Democrats and Republican voters alike want the government to make Wall Street clean up its act.

Democratic primary voters in the four crucial early states of Iowa, New Hampshire, Nevada, and South Carolina overwhelmingly want the federal government to be tougher on Wall Street, according to a new poll.

They aren’t alone. A strong majority of Republicans and independents — 65 and 72 percent, respectively — also think Wall Street needs more government regulation beyond the steps taken after the 2008 financial crisis, according to a poll conducted by Lake Research Partners and Chesapeake Beach Consulting and commissioned by the progressive group Americans for Financial Reform. The poll was shown exclusively to Vox.

This poll isn’t a one-off. The pollsters ask a variety of questions about government’s role in financial regulation, and they have been asking them for the last seven years, with largely consistent results. This body of data suggests the aftershocks of the financial crisis in 2008 are still present in many Americans’ minds, and there is appetite for bold ideas to tackle it.

“I think really the most striking thing about this polling has been its consistency,” Lisa Donner, executive director of Americans for Financial Reform, told Vox. “The experience of the crisis was a really deep and serious one for people. It may have faded into memory of some policy makers and some regulators, unfortunately, but it has not faded in people’s memory because the experience was long-lasting for people.”

Politicians being tougher on big banks and financial companies was a big issue in the 2016 presidential election. It’s coming back into prominence in 2020 with the candidacies of Sens. Elizabeth Warren and Bernie Sanders. Going into a busy election cycle, this poll shows there’s years of strong bipartisan appetite for big ideas to push back on Wall Street.

“It’s getting resurrected by Warren and Sanders,” said Democratic pollster Celinda Lake, one of the pollsters who conducted the survey. “People are just adamant, we want this kind of regulation, we want these rules changed.”

Of course, it’s worth remembering President Donald Trump also capitalized on this populist sentiment in the 2016 campaign — promising to “drain the swamp” and deliver economic relief to Americans. While Trump has done everything he can to roll back regulations and is mired in scandals, he is also presiding during a robust economy. There’s no guarantee this sentiment will boost a Democratic candidate to victory.

Whether it’s Trump, Warren, Sanders or another candidate, presidential hopefuls in either party will have to find a way to address this lingering resentment in 2020. Lake and Republican pollster Bob Carpenter stressed this is a bipartisan issue.

“Anytime you see numbers this strong across partisanship, ignoring them is at your own electoral peril,” Carpenter said.

What the poll shows

The poll surveyed 1,000 likely Democrat, Republican, and independent voters across the nation in mid-July. But pollsters did an additional oversample of 400 Democratic primary voters in the first four early states, to get a sense of what early primary voters are thinking.

For the most part, early-state Democrats mirrored their party nationally — when asked if they supported increased financial regulation, for example, 79 percent of early state Democratic primary voters said they did, compared to 81 percent of Democrats nationally. Like many of the ideas pollsters tested, increased regulation was slightly less popular with Republicans and independents, but still supported by strong majorities in both groups: 69 percent of all voters polled said they supported it, including 58 percent of independents, and 60 percent of Republicans.

There was even more widespread support of the general principle of regulating financial services and their products, with 89 percent of all voters polled saying it is important to regulate them.

Here’s what else pollsters found:

The pollsters also presented voters with two arguments; one saying Wall Street and the financial industry are too powerful and pose a continued threat, and another saying the government has intervened too much changing the financial system. They found:

Finally, the pollsters took a look at voter attitudes toward the Consumer Financial Protection Bureau and the Trump administration’s effort to roll back rules protecting people from predatory lending. They found a large majority of all voters concerned, including:

While this poll and the six others that came before it show that regulating Wall Street is a bipartisan issue on voters’ minds, it’s too early to say whether it could really make a dent in the 2020 election.

There has been some chatter about the possibility of another recession; if that happened closer to the election, it could certainly have an impact. But the news is far more focused on impeachment, as well as a plethora of other issues.

“What we’re seeing is there are so many issues out there that people are talking about with 20 Democratic presidential candidates,” said Carpenter, the Republican pollster. “These are important issues and if they rise to the top they could be problem for Republican policy makers.”

It’s rare there is such bipartisan support on an issue in a politically polarized time. But the public’s views on Wall Street go to the heart of a belief that the system is primed to benefit banks and CEOS over working people.

“They see the connection with money and lobbying and rigging the system,” Lake said. “Even though we have a time of incredible cynicism about government and deep distrust, when you come to this area, people are like no, we need tough enforcement but not weak enforcement.”

Rooting out corruption is a bipartisan issue; as a presidential candidate, Trump borrowed an old slogan of House Democrats, promising to “drain the swamp.” But Trump’s administration has proved time and time again it is very much of the swamp; it has been embroiled in numerous corruption scandals and rolled back consumer protection regulations at every turn.

Of course, this is an issue that uniquely benefits Bernie Sanders and Elizabeth Warren. Warren, in particular, helped create the CFPB and is an expert in Wall Street regulation and predatory lending reform.

“You have two people who have made this the centerpiece of their campaign, but if you step back you have every candidate talking about this more than candidates in 2012 and 2016,” Lake said. “It is powerfully few issues anymore than have as much bipartisan consensus as this one does.”

Senate Republicans promise a quick floor vote on a Trump Supreme Court nominee
Trump has finally been tested for coronavirus. Now we await the result.
This week in TikTok: MAGA meltdowns and Gen Z revolutions
The Masked Singer is a televised abomination I’m going to devour every second of
Pete Buttigieg’s latest plan is an appeal to Latino voters
The 21 Democrats running for president, debate lineups, and everything else you should know about 20...