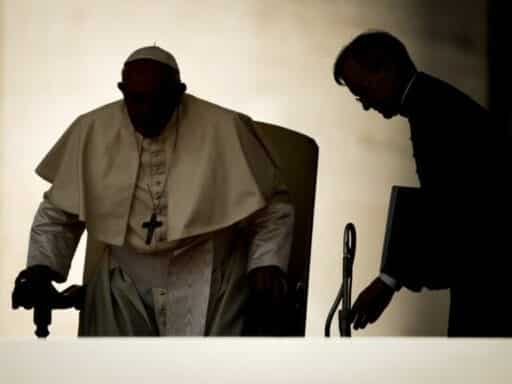 A new Pew poll suggests trust in the embattled pontiff is plummeting.

Catholics’ confidence in Pope Francis has plummeted. According to a Pew study released on Tuesday, just three in 10 American Catholics say they approve of Francis’s handling of the Catholic clerical sex abuse crisis, following a summer of abuse revelations that have rocked the Catholic Church.

In 2015, 54 percent of Catholics reported having a generally favorable view of Francis’s handling of clerical sex abuse, telling Pew they thought he was doing either an “excellent” or “good” job on the issue. In January of this year, shortly after Francis came under fire for dismissing accusations of a clerical cover-up of child sex abuse in Chile as mere “calumny,” that number dropped to 45 percent.

Then came a stream of new revelations concerning the church’s problems with historical sexual abuse. Cardinal Theodore McCarrick, the retired archbishop of Washington, DC, resigned from his cardinalship in disgrace in July after revelations emerged that he had allegedly sexually abused a number of adult seminarians under his authority, as well as two minors, over several decades. Then, in August, a Pennsylvania grand jury released a report implicating 300 priests in that state in the abuse of over 1,000 minors, mostly in the 1970s and ’80s, and countless others in participating in the cover-up. At least eight other states are now in the process of launching similar investigations.

While Pope Francis released a nearly 2,000-word apology, his critics have accused him of ignoring abuse in the church. A longtime conservative rival of Francis, ex-Vatican official Carlo Maria Viganò, publicly alleged that Francis knew about McCarrick’s alleged abuse of seminarians (though not of adults) but still chose to overturn sanctions against McCarrick imposed by his predecessor, Pope Benedict XVI. Francis has consistently refused to comment on those allegations.

Pope Francis’s overall favorability has also decreased. While seven in 10 American Catholics still report having an overall “favorable” view of the pontiff, he’s down 12 points from January. And many Catholics who once described their views towards Francis as “very favorable” are now amending their position: Just 30 percent of American Catholics now describe their opinion of Francis that way, down from a high of 52 percent in 2015.

It remains to be seen whether Francis will be able to turn around public perception of his handling of the sex abuse crisis. He’s called for a major global summit next February to combat the issue, something that may revive many Catholics’ trust in his handling of the issue.

But for many Catholics, it may be too late for Francis to restore trust in the church.

Inside the risky, reckless world of pandemic day trading
Joe Biden is in trouble over a fundraiser tied to a fossil fuel company
Poll: Most Americans support a path to citizenship for undocumented immigrants
Nevada’s entrance polls look good for Bernie Sanders
Data shows social distancing has slowed down the coronavirus outbreak. But what’s next?
Instagram is broken. It also broke us.