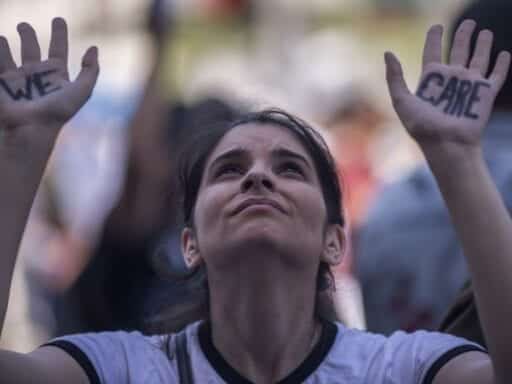 People trust the president to do a better job on border security than Democrats in Congress, however.

As President Donald Trump mounts a push to make immigration a centerpiece issue for the midterm elections, a new poll finds that the majority of Americans oppose some of the administration’s signature immigration policies, including family separations at the border as well as the push for a border wall.

Nearly 70 percent of those surveyed said they oppose the administration’s implementation of a “zero tolerance” policy that forced the separation of parents and children, according to a Washington Post-Schar School survey. Fifty-five percent of those polled are against building a wall along the US border to Mexico. And more than 60 percent of the people surveyed disagreed with limitations that would make it tougher for US citizens to bring parents and siblings to the States.

While survey respondents said they were largely against several specific policies, they indicated they were more willing to trust Trump than congressional Democrats on certain immigration issues, like border security. That was particularly true in battleground districts.

Thirty-seven percent of the Americans surveyed said they trust Trump to do a better job on border security compared with the 27 percent who gave the edge to Democrats in Congress; a higher percentage of those in battleground districts favored Trump on this issue. Sixty-five percent of the respondents overall also approved of bolstering funding for border security programs, even though a wide majority voiced dislike for other hardline immigration efforts.

When it came to the impact of immigration on the US economy, Trump retained a slight advantage as well. Thirty-two percent of the people surveyed said Trump would do a better job ensuring that immigration doesn’t hurt American workers, as compared with the 27 percent who felt this way about the Democrats in Congress.

More people think Democrats are more effective at handling immigration overall, however. Thirty-eight percent of the Americans surveyed said the Democrats in Congress are likely to be more capable in handling the issue, as compared with the 30 percent who said the same of Trump.

The president has sought to make immigration a key issue for Republicans ahead of the midterm elections — although some observers wonder whether the divisive issue could ultimately hurt certain candidates. “I like the issue for [the] election,” Trump said during a rally stumping for vulnerable Republican Sen. Dean Heller in Nevada, according to the Washington Post.

As the president makes the rounds across the country, he’s repeatedly associated immigrants with gang violence, advocated for more closed borders, and vocally championed his harsh tactics. It’s a strategy that could resonate with Trump’s base, while alienating Republicans and independents who are more moderate, experts told the Post.

For registered voters, immigration comes in as a close third behind the economy and health care, as the top issue they’re evaluating ahead of the midterms this fall.