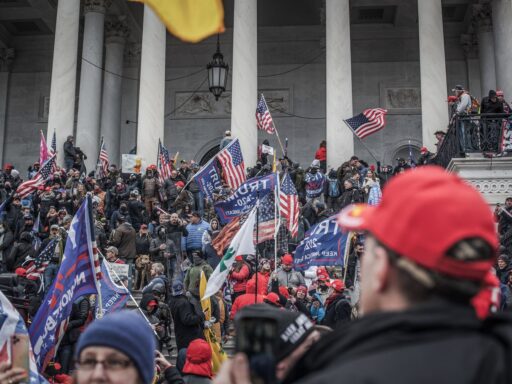 A new poll finds a nation united on opposing the Capitol attacks but divided on who is to blame.

An overwhelming majority of Americans disapprove of the storming of the US Capitol on January 6, but most Republicans say President Donald Trump bears no responsibility for the assault — and nearly half say Republican lawmakers didn’t go far enough in supporting the president’s efforts to overturn the election’s results, according to a new Washington Post-ABC News poll.

The poll — which surveys 1,002 US adults, and was taken from January 10 to 13 — paints a striking picture, and finds a national consensus on the impropriety of what transpired at the Capitol, while revealing familiar divisions on who is to blame for the episode.

The poll found that almost 9 in 10 Americans oppose the storming of the Capitol, and that 80 percent strongly oppose the attack.

But when asked about who is to blame — and what, if any, repercussions Trump should face for promoting a “wild” rally that eventually overran the country’s legislature and resulted in the deaths of five people — there is nothing approaching consensus.

While majorities of the public disapprove of the president’s behavior, Trump still retains a large degree of support from Republicans, as does his disinformation campaign to discredit the 2020 election results.

The poll found 56 percent of Americans believe that Congress should remove Trump from office and prevent him from holding elected office in the future. But among Republicans, 89 percent oppose such a course of action.

The reason for that appears to be straightforward: The pollsters found most Republicans don’t think he did anything wrong.

While 66 percent of Americans believe Trump has acted irresponsibly in his statements and actions since the election, 66 percent of Republicans think he acted responsibly, according to the poll.

A similar divide is also apparent in the poll’s results on whether Trump should be held legally liable for the attack. Most Americans think he should be criminally charged for his role; only 1 in 8 Republicans agree.

These findings of Republicans as reluctant to assign blame to Trump match trends in other surveys. As Vox’s Sean Collins wrote in an analysis of polling conducted immediately after the Capitol Hill attack, considerable portions of Republicans are inclined to believe that the riot was not only not Trump’s fault, but actually something Democrats should be blamed for.

Trump’s support appears to be faltering — not collapsing

There are, however, signs that a significant set of Republicans are skeptical that Trump is the right leader for their party going forward. According the new Washington Post-ABC News poll, fewer than 6 in 10 Republicans and Republican-leaning independents say party leaders should follow Trump’s lead in the future, while 35 percent say they should move away from Trump — “a sentiment that has roughly doubled from 18 percent in 2018.”

Conservatives’ lingering commitment to Trump poses significant dilemmas for Republicans after Trump leaves office. Of late, Trump has taken a somewhat adversarial stance against certain segments of his party, threatening to back the primary opponents of lawmakers he does not like. Establishment Republicans are worried that a Trump-fueled split in the party could damage their prospects as they prepare for midterm elections.

And some Republican lawmakers find Trump’s political style unpredictable, overly transgressive of political norms, and a distraction from their policy agenda. This is reportedly part of why Senate Majority Leader Mitch McConnell is said to be contemplating voting to convict Trump in a Senate impeachment trial and why some Republicans are already working to defeat Trump-style candidates in the 2022 elections.

But, as this poll demonstrates, Trump still has the enthusiastic support of many in the GOP. Regardless of how top lawmakers in the party may view him, they could risk alienating their own base if they try to move too far away from him, or sanction him.

How random people have managed to get leftover coronavirus vaccines
Hundreds of Amazon employees plan to risk their jobs this week by violating company policy
Mollie Tibbetts’s family doesn’t want her death politicized. Trump is doing it anyway.
Mike Bloomberg is a disaster
What Bernie Sanders’s movement does now
2 winners and 3 losers from Tuesday’s Democratic primaries