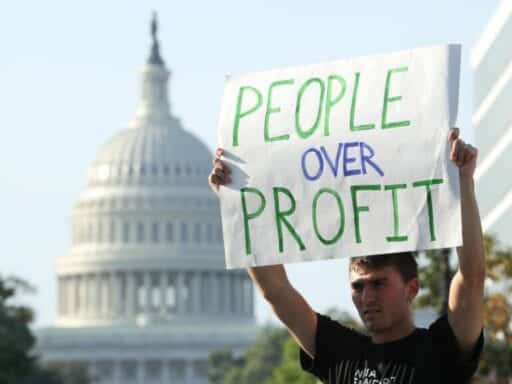 Some Democrats worry the Green New Deal is a political liability. A new poll says otherwise.

The Green New Deal — a set of principles for addressing the climate crisis in the US — has become a rallying cry for the Democratic base ever since progressive firebrand Rep. Alexandria Ocasio-Cortez (D-NY) introduced it in February.

But to go from a big idea to a reality, the Green New Deal needs support from the full ideological spectrum of the Democratic Party. It’s been embraced by a number of leading presidential contenders, but any actual bill would need backing from a Democratic House and Senate as well. While some worry the Green New Deal could be a political liability for Democrats (conservative Republicans have ridiculed and lied about it), there’s new polling that suggests the idea does well in swing districts Democrats flipped in the 2018 midterms.

Progressive think tank Data for Progress and YouGov recently surveyed 1,033 voters in 42 swing House districts across the country; their poll found 49 percent of voters support the Green New Deal, even after being told it would include a large amount of government spending. The poll found 36 percent of voters oppose it. Vox was given a first look at the survey.

“We are told over and over again that the Green New Deal is going to be a political liability for battleground Democrats, and we find that’s not really true,” Julian Brave NoiseCat, the director of strategy around the environmental plan at Data for Progress, told Vox.

Right now, the Green New Deal is a resolution mapping out a framework for a green economy, rather than a specific piece of legislation. Its biggest goal is to make the United States carbon neutral by the year 2030 and turn the country into a global leader in renewable energy. This would be a massive transformation; the document written by Ocasio-Cortez and Sen. Ed Markey (D-MA) calls for the country to upgrade every residential and industrial building to be energy efficient, and completely cut fossil fuel emissions from major industries and US infrastructure.

Bills to realize the Green New Deal are coming; Ocasio-Cortez recently told Vox she planned to release a bill focused on upgrading all US public housing to be energy efficient sometime this fall.

The survey also found Democrats will have to work hard to earn back positive public sentiment around the Green New Deal; Fox News and conservative sources have been hammering the message that the Green New Deal will take away Americans’ cheeseburgers and plastic straws.

“When you look at the numbers it’s very, very clear that Fox News has really been the most significant source of news about the Green New Deal for the most number of Americans,” NoiseCat said. “One way of reading [the poll] is our first priority should not be winning over people who are more skeptical, but educating Democrats.”

To do so, the poll finds Democrats need to emphasize the Green New Deal’s potential to grow the economy and create new jobs in the clean energy sector. And interestingly, it reveals going bolder won’t necessarily make the climate plan less politically popular.

If Democrats want to sell swing voters on the Green New Deal, the poll found they’re better off talking about the positive impact it could have on the economy and job market, for instance upgrading the nation’s infrastructure to reduce emissions and developing more jobs in the renewable energy sector.

Pollsters placed a number of economic arguments about the Green New Deal in front of respondents. The poll revealed the two consistently most popular ones, across age, party affiliation, or race: growing the economy, and creating new jobs in the clean energy sector. Economic growth, reducing electricity costs, and protecting national security through ending reliance on foreign oil were the three most popular arguments among Republican voters in particular.

This is a message youth climate activists are trying to stress when talking about the Green New Deal: The climate crisis is an opportunity grow the American economy and add jobs. Jobs and the economy are consistently top issues for voters, so it makes sense that would be the most popular piece of the Green New Deal across the political spectrum.

“Those are things people intuitively understand because they relate to their everyday lives,” Sunrise Movement co-founder and executive director Varshini Prakash told Vox recently. “I feel like climate activists are always frustrated people don’t care about their issue … the problem is we’re not listening to what people care about.”

Here are a few graphs from the Data for Progress/YouGov poll showing the issues people care about by party affiliation, race, and age.

Looking at arguments by age, there were a substantial number of young people ages 18-29 who responded the most to the argument that a Green New Deal would fight inequality by expanding the social safety net and investing in infrastructure projects that generate wealth at the community level.

Size and scale of the Green New Deal

One surprising thing the poll found is that the ambition and cost of a Green New Deal didn’t change voters’ minds about whether or not to support it much.

Pollsters used an “ambition test” to study this. They presented respondents with three different Democratic presidential candidate’s climate plans, if they were running against a Republican challenger.

The respondents were also shown a policy proposal from a hypothetical Republican presidential candidate, which read: “The Republican supports government doing nothing because they do not believe that the government should be putting such a burden on taxpayers.”

The poll showed Democrats were slightly more receptive to the boldest plan to get America to net-zero emissions by 2030. Republican support for all plans was lower, but and showed they slightly preferred the $3 trillion and $1.7 trillion plans. Here’s the chart showing the breakdown of responses.

Data For Progress concludes this test shows the ambition of such a project wouldn’t cost Democrats electorally, and therefore they could charge ahead with a Green New Deal-like plan without the fear of political repercussions.

“There’s been a lot of hand wringing about the scale and ambition of the Green New Deal, and at least according to our survey there are not political repercussions for supporting more aggressive emissions reductions and timelines and investment numbers, which is encouraging,” NoiseCat said. “This test suggested talking about big things isn’t going to cost us electorally in the way people are afraid it might.”

Of course, history tells us something different. The last attempt to pass a major climate bill known as Waxman-Markey through Congress in 2009 passed the House but didn’t even get taken up by the Senate. House Speaker Nancy Pelosi wrangled votes from moderate Democrats in her caucus who were wary to vote for the bill. There was an electoral consequence for their votes for progressive plans during the 2010 midterms, when a wave of Tea Party Republicans swept in.

That could be tempered in future years, given the shifting public sentiment and urgency on climate change. Public polling shows a growing number of Democrats and young Republicans want action.

“Democrats are still afraid of their own progressive values and their own shadow, and there’s a lot to win and a world to lose in this, so I wish we weren’t so scared,” NoiseCat told Vox. “If we’re going to take this issue seriously, we need to talk about big things.”

Perfectionism is killing us
Americans have fewer kids than they say they want. Alaska has a solution.
Who voters want to be Joe Biden’s vice president, according to the polls
Vote-by-mail and early voting prevented a turnout catastrophe on Tuesday
The economic cost of tech events cancelled due to coronavirus is $666 million and rising
Lady Gaga and Bradley Cooper shine in the newest version of A Star Is Born