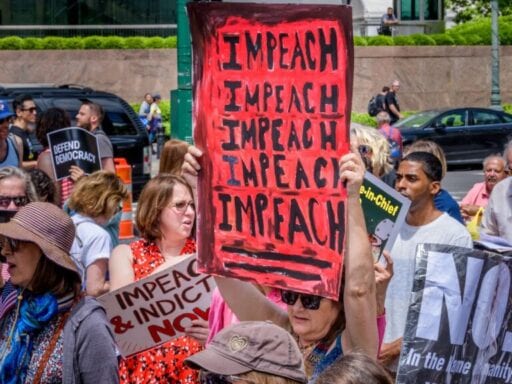 Support for impeachment has been on the rise since the release of the Ukraine whistleblower’s complaint.

Support for impeachment is increasing — so much so that a majority of Americans now support it, according to a new poll this week. And that result — from Civiqs — isn’t an outlier.

It’s bolstered by a new Washington Post-Schar School survey that found the majority of Americans are for an impeachment inquiry, and by a FiveThirtyEight meta-analysis that found support for impeachment jumped up markedly following the launch of that inquiry in late September. Democrats launched their inquiry after news broke about a whistleblower report alleging misconduct on a July phone call between President Donald Trump and Ukrainian President Volodymyr Zelensky.

Using a model based on a number of polls, FiveThirtyEight found 50.1 percent of Americans support impeachment, as of Tuesday. And through online polling, Civiqs found 51 percent of Americans support impeachment. It is notable that both figures take Democrats, independents, and Republicans into account, and that both have spiked since late September: Impeachment support in FiveThirtyEight’s calculation rose by about 10 percentage points and in the Civiqs poll by about 6 percentage points.

Both studies also found the vast majority of Democrats now support impeachment; FiveThirtyEight puts the number at 82.7 percent, while Civiqs found it to be a startling 88 percent. Independent support was rather strong as well, with FiveThirtyEight finding 45.7 percent in favor of impeachment, and Civiqs recording 48 percent. However, an almost equal number of independents are also against impeachment, according to Civiqs: 46 percent.

Unsurprisingly, few Republicans were found to currently be behind impeachment: 15 percent with the FiveThirtyEight numbers, and 8 percent at Civiqs. Despite this low support among Republicans, FiveThirtyEight found support for impeachment is nevertheless rising among that group too — it stayed between 8 and 12 percent all year until the end of September before increasing.

These results were mirrored by the Washington Post’s work — in a traditional telephone poll, its pollsters asked respondents who said they were for an impeachment inquiry whether “the House of Representatives should or should not vote to remove Trump from office,” and 86 percent of respondents said it should.

None of this is a guarantee of continued support — as HuffPost’s Ariel Edwards-Levy notes, polling on impeachment has seen wide variability based on how questions are written, and we don’t know how voters will react to an ongoing investigation. But polls released in the first weeks following the release of the whistleblower’s report indicate that support for impeachment seems to be growing.

These trends are in line with polls taken at the end of September, all of which showed support for impeachment averaging near 50 percent, and growing.

All of this seems to suggest recent revelations about Trump’s conduct with Ukraine have energized Democrats, and changed the thinking of some independents (and a few Republicans) on impeachment. It remains to be seen whether these changes will stick.

Even if they do, it’s unclear whether growing support will change lawmakers’ stance on the issue of impeachment, at least among Republicans. House Speaker Nancy Pelosi reportedly used polls to sway members of her caucus unsure about the impeachment inquiry, but just one House GOP member, Rep. Mark Amodei, currently supports some sort of investigation (and Amodei has been clear he does not back impeachment). And the shifts among Republican voters in these latest polls are far from dramatic enough to make GOP lawmakers change their stances.

Regardless of how Republicans feel about it, an impeachment inquiry is now underway. Most Democrats in the House now support an impeachment inquiry, but backing that is not the same as a vote for articles of impeachment. Indeed, some of those the Post-Schar poll asked who support the inquiry (11 percent) said they do not want to see the House actually impeach Trump.

Overall, though, Pelosi has 58 percent of voters who support her caucus’s inquiry — and 86 percent of those people want the House to vote to remove Trump from office. That, plus the spike of pro-impeachment support in early polls, seem to support her position — and possibly, her decision to wait for a relatively straightforward scandal that happened while Trump was in office.

According to FiveThirtyEight’s calculations, Democrats have backed impeachment throughout the Trump administration, ranging from around 63 percent to around 74 percent — and some among the base have pushed for impeachment inquiries over Mueller’s findings and Trump’s sexual misconduct allegations.

Pelosi had pushed back against those in her caucus who wanted to move faster with an impeachment inquiry — until the Ukraine scandal hit, when she told the public: “The times have found us today.”

Trump’s criminal justice policy, explained
We got comfortable with Hamilton. The new film reminds us how risky it is.
Comey: “No doubt” that Trump would face obstruction charges if he wasn’t president
Live results for Thursday’s Delaware primaries
Star Wars ended the decade on a rough note. At least it had Babu Frik.
“People want to believe”: How Love Fraud builds an absorbing docuseries around a romantic con man