Polls: Democratic voters prefer big structural changes over a return to normalcy in 2020 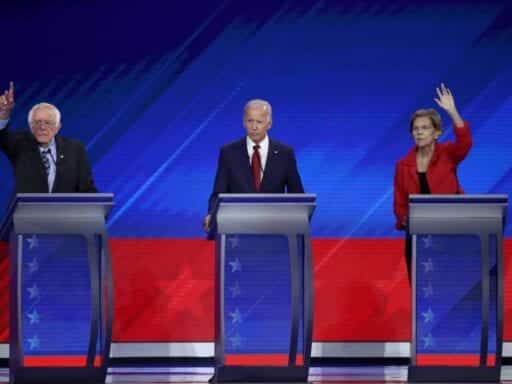 This could be a vulnerability in Joe Biden’s campaign message.

Democratic voters are split: Do they want their presidential nominee to be bold or boring?

It’s a divide that signals a major challenge for former Vice President Joe Biden, who has run a campaign calling for a return to normalcy, as his support has increasingly been overshadowed by candidates supporting major structural change in several national and state polls.

A new poll from Quinnipiac University found that half — 50 percent — of Democratic and Democratic-leaning voters want a candidate who supports major changes across the board — even if those policies are harder to pass into law. A slightly smaller margin — 42 percent — preferred a Democratic nominee that backs minor changes, easier to pass into law. This trend also translates into specific policies, like Medicare-for-all; 49 percent of Democratic voters favor replacing the current private health insurance system with a public system, compared to 44 percent who support building on the Affordable Care Act. The poll has a 3.2 point margin of error.

Another mid-September poll conducted by Fox News found a similar divide; 49 percent of Democratic and likely Democratic voters said they preferred a candidate that would take a new and different approach to governing, whereas 43 percent said they wanted a continuation of former President Barack Obama’s legacy.

When the question was rephrased, removing the reference to Obama, the divide shrank; 50 percent of voters said they wanted a nominee that would “fundamentally change how the political system works in Washington,” versus 46 percent who called for restoring the political system to what it was before President Donald Trump. Support for a new approach in governance has grown since August, when the Fox News poll found 48 percent preferred going back to an Obama-style leader.

Among the three leading Democratic candidates, two are calling for major structural change: Sens. Elizabeth Warren and Bernie Sanders. Meanwhile, Biden, whose pitch is a continuation of Barack Obama’s legacy and a return to decency, has continued to capture the attention of older Americans and land him in the lead.

But if the trends in polling continue, it certainly looks like at least a few more Americans — and particularly the Democratic voters Biden is trying to lock down — are in favor of the Warren-Sanders school of thought: Go big or go home.

Democratic presidential candidates have been having this same fight over and over again.

There’s a contingent of candidates, including Biden, that appear to be making the case that the party is moving too quickly and too boldly to the left, supporting policies like Medicare-for-all that would be politically impossible to pass. When Biden talks about health care, he warns voters about the time it would take to enact something like single payer. Instead, Biden hugs to Obama — whose continued popularity has buoyed Biden’s support so far — calling for expanding the Affordable Care Act with a public option. (It should be noted that Biden’s own proposal, or any Democrat’s, is going to be met with resounding opposition in a split Congress as well).

But then there are those like Warren and Sanders that have made “structural change” a campaign rallying cry.

“I don’t understand why anybody goes to all the trouble of running to the president of the United States to talk about what we really can’t do and shouldn’t fight for,” Warren said at the July presidential debate. “I don’t get it.”

Sanders has echoed the same sentiment.

“I get a little bit tired of Democrats afraid of big ideas,” he said on the same debate stage as Warren in July. “Republicans are not afraid of big ideas. They could give a trillion dollars in tax breaks to billionaires and profitable corporations, they can bail out the crooks on Wall Street so please don’t tell me that we cannot take on the fossil fuel industry — and nothing happens unless we do that.”

When a Biden advisor teased that the vice president’s climate strategy would be a “middle ground” approach, the Sanders campaign jumped quickly, popularizing the hashtag “#NoMiddleGround.”

We’ve seen this same dynamic repeat; Warren and Sanders, and a contingent of others like Julian Castro, argue for major upheavals to the tax code, the health care system, immigration policies, higher education system and environmental policies only to met with candidates who say it isn’t possible.

“Democrats win when we run on real solutions, not impossible promises. When we run on things that are workable, not fairy tale economics,” Rep. John Delaney (D-MD) said on stage with Warren and Sanders.

“Do I think that we’re going to vote to give free college to the wealthiest kids, no, I don’t think we’re going to do that,” Sen. Amy Klobuchar (D-MN) said.

Asked directly, Democratic voters are split down the middle on whether they want to go back to the Obama-era status quo, or push for a radically different approach to governing.

But based on one candidate early state voters are increasingly backing, it looks like a greater share of voters are more open to a message of major change than not. And that could spell danger for Biden.

Warren’s support has been surging in recent polls. As Vox’s Dylan Scott summed up, Warren has been leading in early state primary polls, including in Iowa and New Hampshire. She was in second place in the latest survey in Nevada. Sanders, too has been in third in all three of the latest early-state polls.

The latest Quinnipiac poll also found the most excitement behind Warren’s candidacy.

Put together, this might be a sign that the calls for incremental change are not as big a motivating force for voters in this cycle.