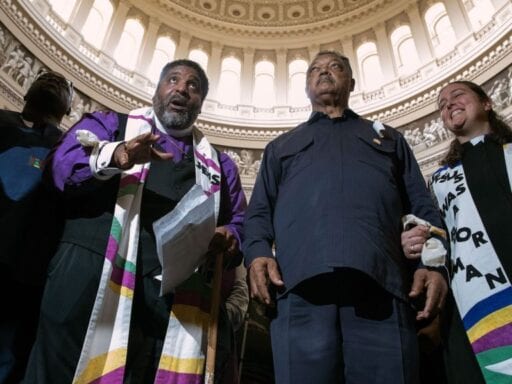 It’s a culmination of a six-week Christian-led campaign against income inequality and racism.

Earlier this month, several White House representatives cited the Bible verse Romans 13 to justify a vision of Christianity that, for example, demands submission to GOP politics and legitimizes the separation of migrant families at the US-Mexico border.

Saturday, at 10 am, in front of the United States Capitol Building in Washington, DC, two Christian faith leaders will spearhead a thousands-strong interfaith cross-party rebuke to that theology. Led by Rev. William Barber, a civil rights activist and mainline Protestant pastor within the Disciples of Christ denomination, and Rev. Liz Theoharis, a Presbyterian minister and co-director of Union Theological Seminary’s Kairos Center, the Poor People’s Campaign is a revival of the historic Martin Luther King Jr.-led movement of the same name.

King’s original movement consisted of a 1968 rally in which the civil rights leader set up a protest camp of 3,000 people of all racial backgrounds on the National Mall. The camp remained there for six weeks.

”All of us can feel the presence of a kind of social insanity which could lead us to national ruin,” King said at the time, arguing that civil rights could only take place alongside a radical addressing of income inequality across America.

Fifty years later, Barber and Theoharis’s Poor People’s Campaign is indebted to that original vision. Over the past six weeks, reflecting the six weeks of the King protest, Barber, Theoharis, and campaign representatives have participated in a number of protests, rallies, teach-ins, religious services, and planned acts of civil disobedience across the United States. (Both Barber and Theoharis have been arrested during the Campaign for blocking access to the United States Capitol.)

The six weeks of campaigning will culminate in Saturday’s rally. Rev. Jesse Jackson, who was an influential figure in the original 1968 rally, will attend, as will the actor and activist Danny Glover.

According to Barber, who spoke to journalists with Theoharis on a press call on Friday, the rally will heavily feature marginalized and impacted voices, not just “people speaking for the poor, but [rather] impacted people of every color and sexuality … from Alabama to Alaska.”

Afterward, Barber said, the group would march from the National Mall to the Capitol and attempt to deliver letters with demands — including reforms to the prison system, the health care system, voting rights, and more — to Congress. Barber likened the action to Martin Luther’s nailing his 95 theses to a church door, which was considered the spark of the Protestant Reformation.

The campaign, Barber stressed, would not be limited to a single issue, whether racial justice, immigration reform, or income inequality. Rather, he said, the campaign would focus on the intersection of all these issues. “We resist those who say poor people need to ask for one thing. … We want all of what the Constitution promises.”

Both Barber and Theoharis’s statements were characterized by richly theological language and a desire to frame their political aims in an explicitly Christian context. Barber quoted Matthew 18:6, a verse in which Jesus admonishes those who fail to care for children and tells his apostles, “it would be better for you if a great millstone were fastened around your neck and you were drowned in the depth of the sea.” And he dismissed the Trump administration’s nationalistic approach to Christianity as “a heretical form of theological malpractice.”

Barber also rejected the label of the “religious left,” or the “left” more generally, to describe the campaign. “We are talking about the moral center,” he said, citing past examples of bipartisan collaboration, such as the passage of the Voting Rights Act in 1965.

Already, the campaign has seen some lasting results. On Tuesday, Sen. Elizabeth Warren (D-MA) and Rep. Elijah Cummings (D-MD) led a two-hour hearing on Capitol Hill to examine the effects of poverty in America.

In other words, there is a long road to travel. Saturday’s event is just the beginning.

Trump’s surprising resilience with Hispanic voters, explained
Every aspect of the coronavirus pandemic exposes America’s devastating inequalities
Would a female candidate be treated like Pete Buttigieg? Amy Klobuchar sees a double standard.
Why Vox Media says it bought New York Media
What is going on with America’s boys?
Why there’s a ring of natural disasters around the Pacific