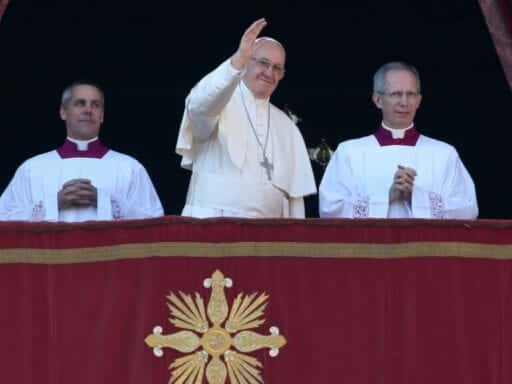 The pontiff made his most incendiary comments to date on abortion.

Pope Francis spoke out vociferously against abortion on Wednesday.

To an audience of tens of thousands in St. Peter’s Square, at the heart of the Vatican, Francis made seemingly unscripted remarks likening abortion to hiring a hit man, Reuters reports.

In off-the-cuff remarks about abortion more generally, Francis was addressing the tension between the rights of a mother to determine her own bodily autonomy and the rights of the fetus as a living being. According to Catholic doctrine, life begins at conception, and abortion is therefore seen as an act of murder.

Permitting abortion in the name of female body autonomy, Francis said, meant “the suppression of human life in the mother’s womb in the name of safeguarding other rights.” He asked the assembled crowd, “Is it right to ‘take out’ a human life to solve a problem? What do you think?” The crowd responded with a resounding, “No!”

His remarks are exactly in line with Catholic doctrine, which considers abortion to be murder. Though hardline Catholics may consider Francis to have a more liberal outlook overall (with his less stringent views on LGBTQ Catholics and his embrace of environmentalism), his stance on abortion has been traditional.

But Francis’s remarks are striking, too, because they are a reminder of the way traditional “liberal/conservative” language, which has for the past few years dominated discourse about internal tensions within the church, is insufficient to express the complexity of Catholic theology.

Francis is often seen as a “progressive” pope. The truth is more complicated than that.

Pope Francis is often framed both by the secular media and by his conservative critics as a “progressive” pope. He has spoken positively about LGBTQ people, in one case asking “who am I to judge” a gay man. He avoids talking about sexuality or hot-button issues, and tends to focus much of his public ministry on advocating for wider social justice causes.

To understand his actual perspective, it’s vital to see Francis not as a “conservative” or “liberal” pope, but as a ferocious critic of what he has frequently referred to as “throwaway culture,” in which the value of human life is denigrated for social or political ends, a culture that encompasses positions on both sides of the ideological perspective.

It’s true that Francis’s opposition to “throwaway culture” has often meant he’s embraced more progressive political causes. He is, for example, a longtime critic of capitalism, an outspoken advocate for refugees, and a major voice on environmental issues. But it has also underpinned Francis’s longstanding, vocal opposition to abortion, which he has characterized as indicative of that same “throwaway culture.” While at times, Francis has criticized the church’s narrow focus on politicized issues, including abortion, as distracting from the church’s wider mission of spreading the gospel in the world, he’s nonetheless consistently and vocally made his opposition to it clear. In June, for example, he called abortion a “white gloves” version of Nazi eugenics.

For Francis, abortion and capitalism alike represent a fundamental undervaluing of the dignity of the human person.

Politically, Francis has had a difficult year. After revelations in the Catholic clerical sex abuse crisis, during which former Washington, DC, Archbishop Theodore McCarrick was removed from active ministry over decades’ worth of abuse allegations, and a Pennsylvania grand jury report implicated 300-plus priests in the abuse of more than 1,000 minors in that state, trust in Francis to handle the crisis is at an all-time low.

Within the Vatican, in particular, self-identified conservatives — including longstanding enemies of this pope — have capitalized on Francis’s perceived weakness to demand his resignation. An archconservative ex-Vatican official, Carlo Maria Viganò, has accused Francis of helping to cover up McCarrick’s abuses.

Within this politicized atmosphere, it’s worth asking whether Francis’s remarks, unscripted as they were, represent a bone thrown to an increasingly alienated conservative faction within the church.

“I’m actually here to speak directly to Donald Trump”: Fox was duped by an anti-ICE Democrat
Rodham author Curtis Sittenfeld explains what it’s like to write in Hillary Clinton’s voice
2 charts refuting Trump’s claim that “airplanes are becoming far too complex to fly”
Who does Trump owe hundreds of millions of dollars to?
Taiwan’s single-payer system is popular — but it might be in trouble
The international controversy over Disney’s Mulan, explained