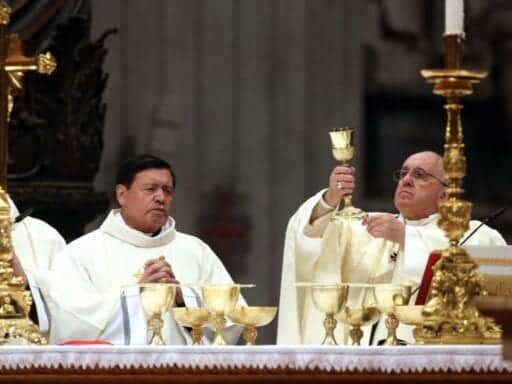 Francis is expected to discuss his handling of Theodore McCarrick and the clerical sex abuse crisis overall.

Pope Francis will meet with several senior United States archbishops on Thursday to discuss accusations of abuse against Cardinal Theodore McCarrick, the former archbishop of Washington, DC, and the broader fallout of the Catholic clerical sex abuse crisis. While Francis has previously met with US cardinals individually about the issue, this latest meeting nevertheless represents a significant step forward in terms of the Vatican’s handling of the crisis.

Cardinal Daniel DiNardo, head of the United States Conference of Catholic Bishops, announced Tuesday that he would lead a delegation of American senior clerical officials to the Vatican for a private audience with the pope. Archbishop of Boston Sean O’Malley, a longtime Francis ally and a vocal advocate of abuse victims’ rights, is also expected to attend.

The delegation will focus on McCarrick, who was stripped of his title earlier this summer after revelations emerged of a pattern of sexual harassment and abuse of both junior seminarians and two minors. Last month, a former Vatican official, Carlo Maria Viganò, accused Francis of overturning sanctions taken against McCarrick by Francis’s predecessor, Benedict XVI, despite knowing of accusations that McCarrick abused seminarians. Viganò says the allegations were an open secret within the Vatican. (Viganò does not say that Francis knew about McCarrick’s abuse of minors.)

Francis has thus far declined to comment on Viganò’s allegations. The McCarrick case is just one of a number of revelations about Catholic clerical child sex abuse that have emerged this summer. In early August, a Pennsylvania grand jury released a 1,400-page report accusing hundreds of priests in that state of molesting at least 1,000 children.

DiNardo has asked Francis to authorize a wider investigation into McCarrick to reveal who in the Vatican hierarchy knew about McCarrick’s actions and failed to act. In his letter, he also wrote that he hoped to work with Francis to initiate “new and confidential” channels for reporting sexual abuse by priests, as well as better avenues for addressing future complaints. “We have already begun to develop a concrete plan for accomplishing these goals, relying upon consultation with experts, laity, and clergy, as well as the Vatican,” DiNardo said.

The delegation is just the beginning of Francis’s meetings with American senior church leadership. DC Archbishop Donald Wuerl, who has faced calls to resign in recent weeks over his role in both the McCarrick case and in sexual abuse cover-ups more widely, announced in a letter to priests in his diocese Tuesday that he would meet with Pope Francis in Rome to discuss his resignation.

Wuerl is accused of knowing about McCarrick’s actions and failing to act. The Pennsylvania report also accuses Wuerl of failing to take allegations of pedophile priests sufficiently seriously during his time as Bishop of Pittsburgh from 1988 to 2006. That said, the report also praised Wuerl for actively intervening to remove offending priests in other instances.

As is customary among cardinals, Wuerl — now 77 — submitted a letter of retirement to the pope when he turned 75, and has served since then at Pope Francis’s behest. Wuerl cannot leave his post until and unless Francis accepts that resignation. Wuerl previously visited Francis last month, shortly after the Pennsylvania report was made public. At that time, Francis told Wuerl to consult with priests in his diocese about whether or not he should retire.

In a letter addressed to priests of his diocese, Wuerl said: “It was clear that some decision, sooner rather than later, on my part is an essential aspect so that this archdiocesan Church we all love can move forward. As fruit of our discernment I intend, in the very near future, to go to Rome to meet with our Holy Father about the resignation I presented nearly three years ago.” He did not specify a date on which he would travel to Rome.

Vox Sentences: 1 million species in peril. Thanks, humans.
Progressives are getting ready to push Biden on immigration reform
4 reasons state plans to open up may backfire — and soon
Harvey Weinstein verdict: Guilty on third-degree rape and criminal sexual act charges
Everything you need to know about the Supreme Court’s new Obamacare case
Ant-Man and the Wasp to Iron Man: every Marvel movie, definitively ranked