President Trump has tested positive for the coronavirus 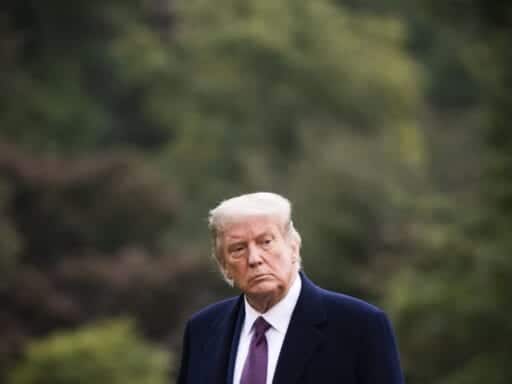 The president said he was beginning the “quarantine” process immediately.

President Donald Trump and first lady Melania Trump have tested positive for Covid-19, and both are reportedly experiencing mild symptoms of the disease — a development with huge but unclear ramifications for the presidential race and for the United States’ ongoing, deadly coronavirus pandemic.

“Tonight, @FLOTUS and I tested positive for COVID-19. We will begin our quarantine and recovery process immediately. We will get through this TOGETHER!” the president tweeted early Friday.

The New York Times’s Maggie Haberman reported Friday that Trump has “cold-like symptoms” and seemed “lethargic” at an event he attended in New Jersey on Thursday. The first lady tweeted Friday morning that she was experiencing “mild symptoms” as well.

It’s not clear who exposed the president and when. But Jennifer Jacobs of Bloomberg News reported Thursday evening that counselor to the president Hope Hicks had tested positive and was experiencing symptoms. Hicks has been traveling with President Trump and other White House staff in recent days, including to the debate in Cleveland, Ohio, on Tuesday and to Minnesota for a fundraiser and rally Wednesday.

The White House released a memo early Friday from Sean Conley, physician to the president, stating that “the President and First Lady are both well at this time, and they plan to remain at home within the White House during their convalescence.” Conley added: “Rest assured I expect the President to continue carrying out his duties while recovering.”

The implications for the presidential campaign — and, really, the country — are unclear at this point. Observers have been expecting an “October surprise” — the term for an unforeseeable event that throws an election into chaos — and the arrival of Covid-19 in the Oval Office may be it.

What happens in the coming days and weeks depends on how serious a case the 74-year-old president has. The coronavirus is particularly dangerous for older people: A person’s risk of hospitalization and death increases with every passing decade. Neither Trump nor his physician has mentioned whether he is displaying symptoms, though Conley said he is “well.”

Rallies are out for the foreseeable future, and it’s unclear whether the president will be able to attend the next debate on October 15.

If Trump’s case were to worsen to the point of incapacitation, it would be possible for the vice president and a majority of sitting Cabinet secretaries to invoke the Constitution’s 25th Amendment — making Mike Pence the acting president. But of course, Trump could also have a mild case and recover well before such a measure would be necessary.

During Tuesday’s debate, Trump mocked former Vice President Joe Biden for wearing masks. ”I don’t wear masks like him. Every time you see him, he’s got a mask,” Trump said. More broadly, the president has repeatedly downplayed the threat of the pandemic, holding packed campaign gatherings and arguing that the country needs to return to normal. The problem, though, was that the virus never went away — as Trump has now learned firsthand.

To date, 7.3 million Americans have been diagnosed with the virus and at least 208,000 have died.

There have been multiple cases of coronavirus around Trump

Vice President Joe Biden, the Democratic nominee for president, has tested negative for coronavirus, his campaign said Friday. Biden and Trump shared a stage, maskless, at Tuesday’s presidential debate. (A negative test doesn’t necessarily mean he’s free and clear of the disease; it can take several days after exposure for some people to test positive, and some show symptoms but never test positive at all.)

It’s not yet clear whether Trump and his entourage exposed members of the public to the virus. According to the Washington Post, “After White House officials learned of Hicks’ symptoms, Trump and his entourage flew to New Jersey, where he attended a fundraiser and delivered a speech. Trump was in close contact with dozens of other people, including campaign supporters at a roundtable event.”

While Trump, as well as aides and reporters in close contact with him, are regularly tested for the virus, mask-wearing isn’t mandated and temperature screenings for visitors to the White House were rolled back in July.

Already, there have been several known cases of coronavirus infection around Trump — most recently, at least 11 members of the Secret Service and his national security adviser, Robert C. O’Brien, according to the New York Times.

Trump also isn’t the first world leader to test positive. British Prime Minister Boris Johnson and President Jair Bolsonaro of Brazil both contracted Covid-19 and recovered. Johnson’s case was particularly severe. During his illness, he spent several days in the intensive care unit, and had doctors standing by preparing to inform the world about his death.

The US, Japan, and Australia let the whole world down at the UN climate talks
The FBI has reportedly reached out to Brett Kavanaugh’s second accuser
Hurricane Florence caused up to $22 billion in damages. Climate change made the storm worse.
Wisconsin has an election next week in the middle of a pandemic. It’s shaping up to be a debacle.
The revealing Medicare-for-all fact-check debate roiling the internet, explained
NBA legend Kobe Bryant and his daughter Gianna shared a love of the game