President Trump will meet the Irish prime minister — at the airport 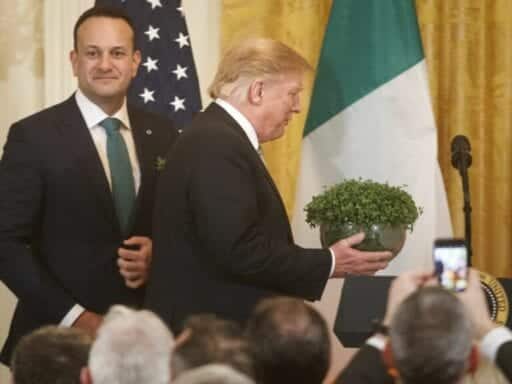 Trump reportedly wanted to go to his golf course in Ireland. The Irish government said no. So they’re meeting at the airport instead.

As part of his big European trip next week, President Donald Trump is scheduled to meet with Ireland’s prime minister, Leo Varadkar, on Wednesday.

It won’t be a fancy affair, though, because they’re meeting at the airport. Well, the VIP lounge, at least.

As the Washington Post’s Anne Rumsey Gearan reports, Trump wanted to host Varadkar at his golf club and hotel in Doonbeg, in County Clare, Ireland.

The Irish prime minister (known as the taoiseach) declined, reportedly favoring Dromoland Castle Hotel, about 30 miles away, which has hosted US presidents, including George W. Bush.

But Trump must’ve rejected that option, so a more neutral locale has been agreed on: the Shannon airport, also in County Clare.

According to reports, the debate over the visit location threatened to derail the meeting between the two leaders, as Varadkar objected going to Trump’s private club and Trump threatened to just go to his club in Scotland instead, according to the Irish Times.

So the compromise was reached — a place where no one wants to go, the airport.

The New York Times reports that the Shannon airport has hosted international meetings in the past, so even if this is not exactly a fancy state visit, there is some precedent. The other people who probably aren’t thrilled about this are those who will be traveling through the airport during the president’s visit. They’ve been warned to factor in an additional 15 minutes to their travel time (but let’s be honest, it’s probably going to be a way longer delay than that).

And Trump will get a chance to visit his golf course. He’ll travel the following morning to France to attend a D-Day commemoration celebration, and will then return to Doonbeg, in Ireland, to spend the night at his golf club.

Seriously, the president’s bilateral meeting with Irish PM Varadkar is going to take place at the VIP lounge at Shannon. Trump wanted it st his nearby golf club. The Irish said no thanks. So, across from the Duty Free and next to the Irish Coffee bar at the airport. Perfect.

Trump hosted Varadkar at the White House this March, but the US president abruptly canceled a visit with the Irish prime minister last November.

Protesters prepared to demonstrate ahead of that November visit, and they’re likely to gather again, something Varadkar himself acknowledged.

“I’d say to them, this is a democracy and peaceful protest is part of democracy,” Varadkar said earlier this month, about possible Trump protests. “And I would certainly never criticize anyone for taking part in a protest if that’s the way they wish to express their views.”

That might be why Trump was eager to decamp for his golf resort in Doonbeg, where the town is expected to drape itself in American flags ahead of his visit.

Trump is visiting the United Kingdom ahead of his visit to Ireland and France, and protests are expected in London ahead of his visit there, too. When Trump visited last summer, the president largely avoided the city and its protests (and gigantic Trump baby blimp) by hanging out with Prime Minister Theresa May at her Chequers estate — and enjoying a respite at his golf course in Scotland.

Trump is bragging on Twitter about his coronavirus briefings getting lots of viewers
This week in TikTok: The funniest skin care influencer you don’t know yet
Newt Gingrich just revealed what the Kavanaugh fight was really about
The Supreme Court’s latest decision looks like a win for voting rights. It’s really a threat.
Elizabeth Warren compares Big Tech to Big Oil in a new fundraising ban
How a basic iPhone feature scared a senator into proposing a facial recognition moratorium