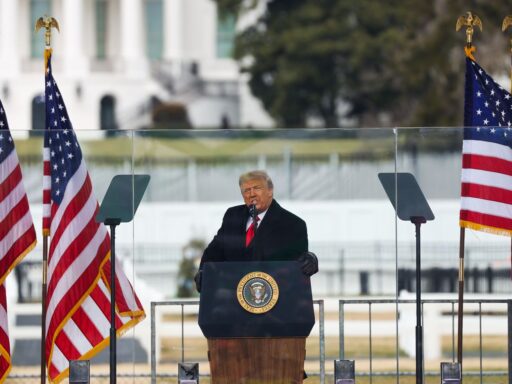 After the Capitol siege in his name, Trump says he’s skipping Biden’s inauguration.

Two days after a mob occupied the US Capitol in his name, President Donald Trump announced he will not attend President-elect Joe Biden’s inauguration on January 20, 2021.

Trump had finally, more or less, conceded after this week’s events had led to open discussion on Capitol Hill of another impeachment or removing him from office through the 25th Amendment. But, by boycotting Biden’s inauguration, he is refusing to participate in another tradition in the peaceful transfer of power.

To all of those who have asked, I will not be going to the Inauguration on January 20th.

Trump’s announcement was long expected, but he had not made anything official while he baselessly challenged the integrity of the November election. He had refused to even admit he’d lost.

That started to change on Wednesday, the day after the storming of the US Capitol that left five people dead. Trump released a video statement in which he acknowledged that “a new administration” would be sworn in on January 20. Vice President Mike Pence announced he would attend Biden’s swearing-in.

But it wasn’t clear whether Trump would attend his successor’s inauguration, something every outgoing president has done since Andrew Johnson missed Ulysses S. Grant taking the oath of office in 1869. On Thursday, Trump announced he would break that streak and skip Biden’s ceremony.

Republicans had been urging Trump to attend, and even Biden himself had portrayed Trump’s participation as symbolically important. The losing candidate showing up at the winner’s coronation is one way the US marks the peaceful transfer of power, which is why most runners-up in the modern era appeared at inauguration (including Hillary Clinton in 2016).

Granted, the assault on the Capitol building during the counting of the Electoral College votes has already shattered the idea of the transfer of power from Trump to Biden being entirely peaceful. But Trump’s decision not to attend the inauguration is still another salvo in his campaign to undermine Biden’s victory.

It’s not clear yet what Trump’s plan for Inauguration Day will be. He had reportedly discussed holding an alternate rally and even launching a 2024 presidential run on the same day his successor is sworn in. But it will be worth monitoring, especially given the reports that the same Trump supporters who swept through the US Capitol appear to be planning more disruption around the inauguration.

Joe Biden breaks record for most votes ever in a presidential election
The international controversy over Disney’s Mulan, explained
A man takes over a feminist fashion brand. What happens next?
The difference between the DNC and RNC, in one tweet
Heat waves can be deadly for workers and will drain the US economy
Today, Explained looks at how the coronavirus pandemic reshaped the world