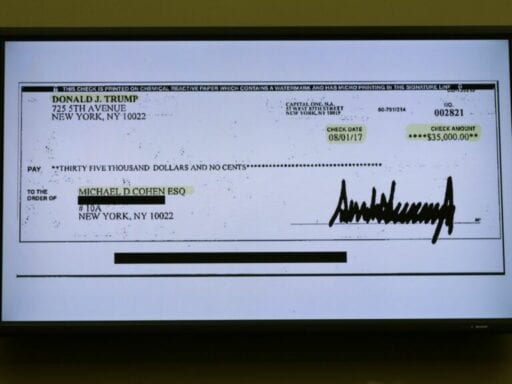 The checks themselves don’t prove a crime, but they could be one piece of evidence in a potential case against Trump.

Michael Cohen’s dramatic congressional testimony last week came with a vivid visual aid. The former attorney to President Donald Trump publicly released several personal checks meant to reimburse Cohen for his hush payments to Stormy Daniels — including some signed by the president himself.

The checks don’t change the basic facts at issue in the hush money scandal. Cohen pleaded guilty last year to violating campaign finance law by paying off Daniels shortly before the election. And we’ve known for quite some time that Trump reimbursed Cohen for this afterward.

But the big unanswered question is whether prosecutors in the US Attorney’s Office of the Southern District of New York hope to pursue the hush money case further — by implicating the Trump Organization or even the president himself.

According to legal and campaign finance experts, the checks themselves don’t prove a crime. But they could be one piece of evidence in a potential case against Trump.

“There’s a saying among criminal prosecutors: You build a wall brick by brick,” Paul S. Ryan, vice president of policy and litigation at watchdog group Common Cause, told me. “These checks are not the wall, but they are a brick — or 11 bricks — in this wall.”

Cohen has admitted that, ahead of the 2016 election, he violated campaign finance laws by arranging hush money payments for two women who had alleged affairs with Trump. The first woman, Karen McDougal, was paid $150,000 by the National Enquirer’s parent company, American Media Inc., to secure the rights to her story and bury it.

But the second payment — $130,000 for Stormy Daniels — was made by Cohen himself, just days before the 2016 election, in exchange for Daniels signing a nondisclosure agreement.

The new checks lay out how Cohen was reimbursed — and then some — for his payoff to Daniels. He was given multiple monthly payments of $35,000 each.

“The checks in and of themselves are significant from an evidentiary standpoint, because they provide some corroboration of Michael Cohen’s explanations of what happened,” Erin Chlopak, co-director of campaign finance strategy at the Campaign Legal Center, said.

The New York Times on Tuesday published eight of the 11 checks and a timeline of when they were sent to Cohen — all during Trump’s presidency.

The first two checks were from the Donald J. Trump Revocable Trust Account, and signed by Donald Trump Jr. and Trump Organization finance chief Allen Weisselberg. Here’s one of them:

The other known payments were personal checks signed by Trump himself:

Federal prosecutors in the Southern District of New York (SDNY) said in a December sentencing memo that Cohen sent monthly invoices to Trump’s company “falsely indicating” that these invoices were part of some retainer agreement, and that the Trump Organization falsely accounted for the payments as legal expenses.

Representatives for the White House and Trump Organization did not return requests for comment on this story.

What the checks show — and don’t show

Specifically, prosecutors argued that these payments were made “with the intent to influence the 2016 presidential election” and should have been subject to campaign finance limits. (The legal limit for making a donation to a political campaign at that time was $2,700.)

Cohen has implicated Trump in his campaign finance crimes by saying that Trump told him to orchestrate the hush payments. But prosecutors are going to have to prove more than that to make a criminal case against Trump, according to Ryan.

One, they have to establish that the purpose of the payments was political and not personal (in other words, that they were made to help Trump in the election, not, for example, to keep his wife from finding out about his alleged affairs). And two, they have to prove that Trump directed the payments and was personally liable.

The checks, which Trump signed while he was president, prove that Trump at some point figured out about Cohen’s hush payments and agreed to pay him back. (There’s an alternative some Trump defenders use, saying he just thought he was making retainer payments, but as mentioned, federal prosecutors don’t believe that.) But they’re not proof Trump knew about the original campaign finance violation.

Furthermore, Trump trying to keep the payments under wraps might not matter in a courtroom, at least as part of a campaign finance violation.

“You have a scheme that is essentially to disguise and hide payments that Cohen made during the campaign, and Trump and the Trump trust were involved in that scheme,” former federal prosecutor Renato Mariotti said. “In and of itself, is that a crime? I wouldn’t say necessarily.”

Trump’s reimbursement payments to Cohen don’t just matter in the campaign finance realm — they’re significant in terms of government ethics, too. Trump should have reported his debt to Cohen in financial disclosures to the Office of Government Ethics (OGE) from the get-go. He didn’t.

Trump left the money he owed Cohen off of his 2017 disclosure, but in a footnote in his 2018 disclosure he said he had “fully reimbursed” Cohen for expenses he had incurred. (It didn’t specify for what.) Subsequently, in May of last year, the OGE sent a letter to the Department of Justice alerting Deputy Attorney General Rod Rosenstein about the omission. And in August, watchdog group the Project on Government Oversight asked the OGE to review whether that footnote had been accurate, since it declared Trump had paid Cohen up to $250,000 but prosecutors revealed Cohen had received $420,000.

The OGE appears to have responded with a subtweet at the time.

There are criminal penalties for some ethics violations, like willfully omitting information on ethics disclosures, working on government matters when one has a financial conflict, and accepting money from private persons in exchange for doing government work.

“Trump was required to disclose this debt on an ethics form he filed in June 2017, and he failed to disclose it,” Kathleen Clark, a professor of government ethics law at Washington University Law School, said. “In other words, while he was president, Trump lied to the Office of Government Ethics.”

House Oversight Committee Chair Elijah Cummings (D-MD) has pressed the White House for documents regarding Trump’s payments to Cohen and the Daniels hush money. In February, he released documents from the OGE that he says show “that lawyers representing both the White House and the Trump Organization repeatedly provided false information to ethics officials, including ‘evolving stories’ about whether payments were made to Mr. Cohen and the purposes of those payments.”

There could be more here

Experts I spoke with said that Trump’s reimbursement payments to Cohen — and the checks — could have further legal significance, though it may be too early to tell exactly what.

Weisselberg, the Trump Organization’s CFO, signed some of the reimbursement checks, and Cohen has said that he was in Trump’s office when the decision to pay Daniels was made. That could implicate him legally, though he was granted immunity by federal prosecutors for cooperating in the Cohen investigation last year. So if prosecutors did bring a case on this topic, they would have to show their evidence wasn’t derived from his testimony, Mariotti explained. Trump Jr. also signed some of the Cohen reimbursement checks, but it’s less clear what he knew about the Daniels payments and when.

Mariotti said that the Trump Organization and trust could potentially be in legal crosshairs for having false statements on their books and records — basically, for saying that the Cohen payments were for legal services and not reimbursements for the hush money. If, for example, having those false statements on its books, the Trump Organization obtained a loan from a bank, that could amount to breaking federal law, he said. And under state law, it is a crime to have false books and records.

“There is state and federal criminal exposure that’s implicated by the false statements in the books and records in the Trump Organization, and these checks are tied to that, because they are payments connected to these false statements,” Mariotti said.

Ryan said that the reimbursement checks could potentially be evidence in areas such as money laundering and mail and wire fraud. But, he said, that would all depend on whether there is a provable case on campaign finance violations — basically, that the Daniels hush money and Cohen reimbursements were made for political purposes, and that Trump directed the hush payment.

The real question, then, is whether the US Attorney’s Office in the Southern District of New York thinks further charges on the campaign finance case are provable — and intends to pursue them.

“If it could be proven that there were campaign finance law violations, then you have a cascade of other possible crimes,” Ryan said. “And the checks are direct evidence of some of those additional crimes.”

6 winners and 5 losers from the 2020 Oscars
RSVP now to talk Gold Diggers with Sanjena Sathian and the Vox Book Club
Stacey Abrams’s new essay on identity politics reveals why she’s a rising star
The right-wing populist wave is a threat to the climate
Social distancing isn’t a personal choice. It’s an ethical duty.
Why Biden isn’t talking about impeachment