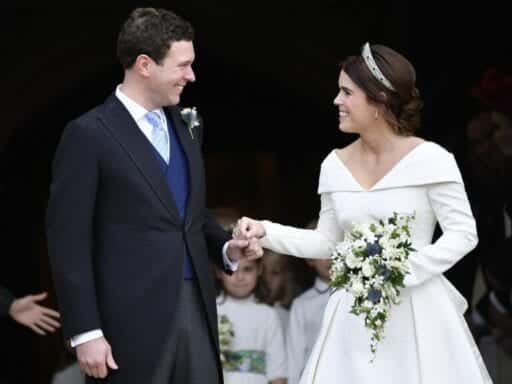 For her wedding, Princess Eugenie wore a Peter Pilotto gown and a tiara on loan from the queen.

Who was there? What did they wear? Let’s dive in!

Who made Princess Eugenie’s wedding dress?

Peter Pilotto and Christopher de Vos, the designers behind the British brand Peter Pilotto. Though the label is known for its vivid prints, Princess Eugenie went for a traditional white gown with a full skirt, long sleeves, and a neckline that folded over the shoulders to create a low back.

Classic as the dress is, there are some interesting design details here. The first is that revealing back, which, with Princess Eugenie’s updo, highlighted the long scar running down her spine. That was intentional, according to the Kensington Palace website: “The low back feature on the dress was at the specific request of Princess Eugenie who had surgery aged 12 to correct scoliosis.”

Though they were working in white, Pilotto and de Vos still put their talent for prints to use. Woven into the dress’s fabric are a variety of symbolic plant motifs. There’s thistle for Balmoral Castle in Scotland, one of the royal family’s homes; a shamrock for the Ferguson family’s Irish roots; the York rose; and ivy, “representing the couple’s home.”

This feature recalls Meghan Markle’s wedding look. When Markle married Prince Harry in May 2018, the design of her veil featured flora from all 53 Commonwealth countries, along with wintersweet for Kensington Palace and California poppies for her home state.

Like Markle, Princess Eugenie styled her wedding dress with a blingy heirloom on loan from the queen: the Greville Emerald Kokoshnik Tiara, which was crafted in 1919. We’re talking diamond pavé set in platinum, plus six emeralds, all constructed in the style of the Russian Imperial Court.

What did Kate Middleton and Meghan Markle wear?

As expected, the Duchesses of Cambridge and Sussex did not overshadow the bride. Kate Middleton wore a raspberry-hued Alexander McQueen dress to Princess Eugenie’s wedding, and Meghan Markle wore a streamlined navy Givenchy coat dress.

Each woman has come to be associated with the brand she wore: Middleton chose McQueen for her own wedding in 2011 and wore a (repeat) McQueen outfit for Markle’s nuptials. Meanwhile, Markle selected custom Givenchy for her wedding ceremony in May and has made multiple public appearances in the French brand, currently helmed by the British designer Clare Waight Keller.

Who else was there? What did they wear?

In addition to the usual royal suspects, Princess Eugenie and Jack Brooksbank’s wedding brought out a swarm of celebrities. From the entertainment world, there were faces like Liv Tyler, who, according to Australia’s Nine Network celebrity site, “may run in similar circles as the royals”; Demi Moore, “a longtime friend of Eugenie’s parents,” according to Us; James Blunt, who served in the army with Prince Harry; and Ellie Goulding, who performed at Prince Harry and Meghan Markle’s wedding.

The British fashion contingent was out in full force, too. Naomi Campbell wore a sculptural fascinator, black leather gloves, and a feathered Ralph & Russo dress, while Kate Moss and her daughter Lila (newly a model herself) wore matching veils.

Two of Prince Harry’s exes, Cressida Bonas (in a blue dress) and Chelsy Davy (going for broke in a pale blue jumpsuit, newsboy cap, and furry clutch), turned up to the event, too.

Perhaps the best-dressed person of the day, however, was the British model and actress Cara Delevingne, who wore an impeccably tailored Armani tuxedo and a Chanel top hat. She also accessorized with a toothpick dangling from her mouth.

Who wore the best hat?

A tough call. Either Poppy Delevingne, who wore a tall, fluffy fascinator that made her look a bit like a high-fashion peacock, or the mother of the bride, Sarah Ferguson, whose razor-sharp hat looked like it could take out an eye.

Were Princess Charlotte and Prince George there? Did they look incredibly cute?

Justice Alito’s jurisprudence of white racial innocence
Netflix’s Shirkers is a punk feminist documentary gem
Rush Limbaugh’s toxic legacy
Sen. Kelly Loeffler has tested positive for the coronavirus
The keto moment
The DOJ has a plan to protect voting rights. It might not be enough.