Private debt collectors can seize stimulus checks. Some states are trying to stop them. 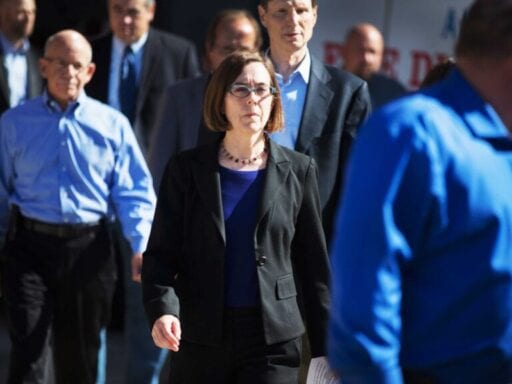 Oregon Gov. Kate Brown joined the leaders of Illinois and Washington in prohibiting stimulus checks from seizure by debt collectors.

Brown’s order is the latest state-level effort to protect the relief measure from being taken by debt collectors under a process known as garnishment — something creditors can legally do given neither Congress nor the Treasury Department took steps to ensure the checks are exempt from seizure.

“Many Oregonians, through no fault of their own, are struggling to pay their bills, their rent, or even buy essentials like groceries and prescription drugs,” said Brown in a statement. “These recovery checks were meant to provide relief, not reward debt collection agencies for preying on Oregonians who have lost their livelihoods.”

As the Hill notes, Brown’s order protects the stimulus checks, which can be up to $1,200 for an individual, from garnishment the way other federal aid is, like Social Security, disability, and veterans’ benefits.

Earlier this week, the governors of Illinois and Washington state also signed orders to protect stimulus checks from garnishment. “That stimulus check should help to pay for the necessities — food, rent, that type of thing,” said Washington Attorney General Bob Ferguson after Gov. Jay Inslee issued a protective proclamation on Tuesday. “It should not be garnished to pay for medical bills. That would not be right.”

Under the CARES Act that authorized the stimulus, the checks are protected from being collected by most federal and state debt collectors. (Notably, they’re not exempt from unpaid child support.) But the checks are not shielded from private creditors collecting debt on things like medical bills, credit card bills, or private student loans.

A group of 25 attorneys general wrote a letter to US Treasury Secretary Steven Mnuchin last week calling for him to exempt the stimulus checks from private debt collection. But as David Dayen has reported for the American Prospect, the Treasury Department was aware of the debt collection provision, and appears to have given collectors a green light.

Millions of Americans could have their stimulus checks garnished

About 70 million consumers report being in debt or being contacted about debt, according to a 2017 survey by the Consumer Financial Protection Bureau. Experts believe millions of Americans are likely to have their stimulus checks garnished by private lenders — and those likely to be targeted are those who need relief the most.

“The folks who owe people money, who are disproportionately poor, are the ones at greatest risk. Ironically, those are the same folks who are most in need of the checks and may be most in need of assistance to provide their families shelter, food and medicine,” Brent Adams of the Woodstock Institute, a Chicago-based economic development agency, told ABC News.

Exacerbating the problem further is that many people who believe they have wrongfully had their bank accounts dipped into won’t be able to seek legal recourse any time soon, since courts in many states have closed for nonessential business.

As Dayen reported for the American Prospect last week, it’s not just private collectors that are able to garnish the stimulus checks: The Treasury Department “effectively blessed” the idea of banks garnishing stimulus checks during a webinar with banking officials earlier in April. Banks were reportedly told they would be “first in line” to take money from the stimulus money to cover things like delinquent loans or past-due fees.

Consumer advocates have been outraged by the maneuver. “At a time when people are desperate to buy food, the idea that anybody would grab [the $1,200 payments], let alone the banks they trust with their money, is appalling,” Lauren Saunders, associate director with the National Consumer Law Center, told the American Prospect.

A number of Democratic senators — as well as Republican Sen. Josh Hawley — have requested the Treasury Department bar private collectors from garnishing the checks. At the moment, however, it’s looking like the only successful efforts to shield recipients of the stimulus checks is taking place on a state level.

But even in states where governors are taking action, consumer advocates are calling for more sweeping measures. For example, in Illinois, where Gov. J.B. Pritzker has announced a suspension of debt collection laws, consumer advocates have called for the governor to issue an order that would force debt collectors like payday lenders to manually, rather than automatically, obtain payment from debtors, and to charge no late fees. They also called on the governor to threaten to take away business licenses from companies that don’t comply.

In some states, there are existing laws that could protect the stimulus checks. Ohio Attorney General David Yost, for example, has warned creditors that the checks can’t be garnished under state law. Nebraska’s attorney general told creditors to “proceed with caution.”

If the purpose of the stimulus really is to help people who have lost income and get them to spend money, it would seem that a federal solution handled by the Treasury Department would be the most efficient way to deal with the issue.

Why dating apps make you feel awful
How to topple dictators and transform society
The US won’t give visas to same-sex partners of UN officials anymore
FBI arrests leader of private militia accused of detaining migrants on US border
Could squeezing more oil out of the ground help fight climate change?
How Light from Light’s team used “emotional research” to build an unusual ghost-hunter story