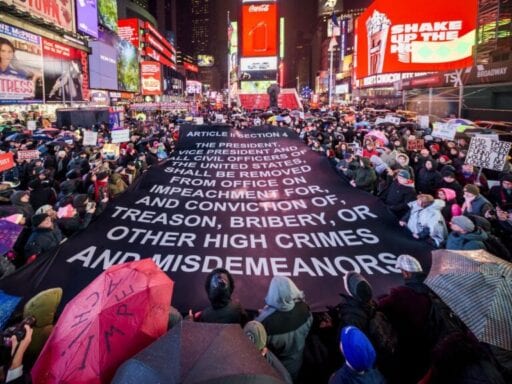 Protest organizers said over 200,000 people attended an evening of national protest, but it isn’t clear whether this momentum will be built upon.

Thousands of Americans demonstrated in hundreds of pro-impeachment rallies across the United States the evening before a historic vote on impeaching President Donald Trump Wednesday.

Those demonstrations — organized by a coalition of activist groups that included 2020 presidential candidate Tom Steyer’s Need to Impeach, MoveOn, Greenpeace, and the Women’s March — drew over 200,000 people to more than 600 protests in nearly every state, according to organizers.

While there have been demonstrations calling for the president’s removal before, they have not typically drawn the sort of crowds seen by January 2017 Women’s March, and have not been sustained protests like the Occupy Wall Street movement or the global protests that have brought down leaders in Bolivia, Lebanon, and Iraq.

It isn’t yet clear how much political momentum Tuesday evening’s protests will bring, but they did present a major signal of support for House Democrats’ decision to proceed with impeachment, an incredibly polarized topic. (Many pro-impeachment rallies were met with counterprotesters, who were also vocal in their messages of support for the president.)

In Chicago, as protesters marched toward that city’s Trump Tower, Crystal Ashley framed the protests as a message to lawmakers.

“I’m here in the freezing cold, in the Midwest, because I want Congress to know that we’re paying attention,” Ashley told the Chicago Tribune. “And we want them to do their job.”

Demonstrators in New York had similar sentiments, telling the New York Times the impeachment process is as much about Congress as it is about the president.

“I think that what happens tomorrow is going to solidify for a lot of people whether their representatives are acting on behalf of their constituents or themselves,” Erica Bruce said.

And in Reno, demonstrator Jim Dakin said he hoped the protest would alter Republicans’ thinking.

“I’m here because I want to show support for impeachment,” Dakin told the Reno Gazette. “I’m holding out hope the Republican senators will wake up at the last minute. It’s never too late.”

Senate Republicans have made it clear there is little chance of that happening; Senate Majority Leader Mitch McConnell assured Fox News viewers “there’s no chance the president will be removed from office” last week, and Trump ally Sen. Lindsey Graham said recently said, “I have made up my mind. I’m not trying to pretend to be a fair juror here.”

Democrats have criticized these sorts of statements from Republicans; impeachment inquiry leader and House Judiciary Committee Chair Jerry Nadler said GOP senators announcing their plans to exonerate the president are “in violation of the oath that they’re about to take, and it’s a complete subversion of the constitutional scheme.”

Some protesters — even as they stood out in below-freezing temperatures to rally for impeachment — were willing to acknowledge this tension. “It’s very disempowering to think, okay, yeah, he’ll get impeached, and then we’ll go to the Senate and nothing will happen,” Susan Lawrence in Chicago told the Tribune.

Protests haven’t yet moved the needle on impeachment, but they also have yet to become a mass movement

This reality, of a sort of impasse between vocal pro-impeachment Democrats and staunch presidential allies is reflected not just in Congress or at the demonstrations, but in the polls. For months, Americans have been split on impeachment — largely on partisan lines — and new polls from Fox News, CBS, Gallup, FiveThirtyEight/Ipsos, and others have found support for impeachment is frozen, with roughly half the country still in favor and half against the measure.

Pro-impeachment rallies in Dayton, Ohio; Los Angeles, California; Boston, Massachusetts; and Lexington, Kentucky, on the eve of a historic vote on impeachment.

Vox’s Matt Yglesias has made the argument that there is one thing that could change how impeachment is viewed — massive, widely covered, and sustained protests:

Elected officials in the Democratic Party, like established politicians everywhere, aren’t instinctively comfortable with the idea of popular resistance, but it’s not an entirely alien concept to them, either. In the extreme political emergency of 2017, they embraced protest politics. That started with emergency mass demonstrations at airports to block Trump’s initial travel ban, continued through the Women’s March, and was seen repeatedly on Capitol Hill and in congressional town halls as people came out en masse to oppose repealing the Affordable Care Act.

The sort of energy around the Women’s March — which some have credited with helping to usher in the most diverse Congress ever in the 2018 elections — has not been seen around impeachment.

Arguably, the world is having a moment in which mass protests have ushered in real change, from those in Sudan leading to the formation of a new government, to those in Bolivia seeing that nation’s head of state exiled, to Iraqis pushing out their prime minister, to Hongkongers killing an extradition bill — and such a list could go on.

The US also has a tradition of extended protests, from those of the civil right movement to the Occupy Wall Street demonstrations. Why mass anti-impeachment protests have not quite caught on isn’t clear (but obviously nuanced); once solution Yglesias has suggested is prominent Democrats taking a more active role in promoting them.

One — billionaire Tom Steyer — seemed poised to do so, building a well-funded pro-impeachment organization, but abandoned it ahead of the impeachment inquiry to run for president. And other leaders, from House Speaker Nancy Pelosi to inquiry leaders like Nadler and Rep. Adam Schiff, have not seemed to engage with the sort of activists who organized Tuesday’s protests.

With impeachment seeming set to wrap up in January or February, they will have little time to pivot to a more activist-driven strategy, which would suggest we’ll never know if more protests (or politician-endorsed ones) would have made a difference in what seems to be a foregone conclusion to the impeachment saga. Tuesday’s demonstrations might be the most America gets to see.

The FDA says buying young people’s blood won’t stop you from aging
11 great ways to pass the time this holiday weekend
Big Tech thought the pandemic wouldn’t be political. Think again.
The extremely profitable (and ethically murky) business of reselling dumbbells
The return of “lock her up”: Trump won’t stop attacking Gretchen Whitmer
Salvadorans on TPS will now be able to stay in the US for another year