Progressive activists think they have a shot at stopping Brett Kavanaugh 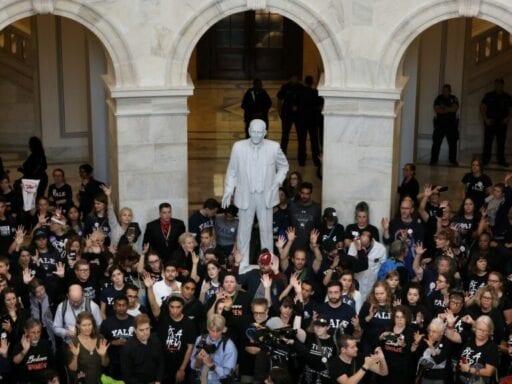 Why the activism opposing Kavanaugh is more intense than past Supreme Court nominees.

Monday seemed like a fairly quiet day in the US Senate, as senators gradually returned from their weekends home. But it was chaos inside the Hart and Russell Senate Office buildings.

About 1,000 people protesting Supreme Court nominee Brett Kavanaugh — including more than 100 Yale Law School students — were arrested by Capitol Hill police on Monday morning, according to organizers. Their voices, chanting “I believe Anita Hill! I believe Dr. Ford!” reverberated around the Senate’s marble hallways as their hands were zip-tied and they were led away.

They weren’t alone — at 1 pm on Monday, women around the country staged a national walkout in solidarity with Christine Blasey Ford and Deborah Ramirez, the two women accusing Kavanaugh of sexual misconduct. Kavanaugh has denied the allegations.

The protests against Kavanaugh are much larger than any against Trump’s first Supreme Court nominee, Justice Neil Gorsuch, who was confirmed last year. On Monday alone, about 45 people were arrested in the office of Sen. Susan Collins (R-ME), one of the key Senate swing votes on Kavanaugh and a target of protests.

Protester outrage has featured prominently in Kavanaugh’s confirmation hearings since Day 1. Kavanaugh couldn’t even complete his opening statement to the Senate Judiciary Committee a few weeks ago; protesters (nearly all of them women) leaped out of their seats to disrupt the proceedings. Demonstrators’ main concerns were then about the possibility a conservative justice could vote to overturn Roe v. Wade or strike down the Affordable Care Act.

“We made a very conscious decision to engage in acts of civil disobedience,” said activist Linda Sarsour, national co-chair of the Women’s March. “We wanted the story when these hearings started [to] not be business as usual.”

Protests only intensified after the accusations of sexual assault and misconduct. Outside the four walls of the Senate, more than 600,000 people have signed a MoveOn.org petition to stop Kavanaugh, and more than 50,000 have called their senators urging them to vote no. In August, tens of thousands of protesters across the country held a day of action to demonstrate against Trump’s pick.

“That has never happened around a Supreme Court justice before,” said Erica Mauter, who is coordinating Kavanaugh protests for MoveOn. “Progressives don’t usually mobilize around the Supreme Court.”

The difference between Gorsuch and Kavanaugh

Protesters are much more fired up against Kavanaugh’s nomination than they were for Gorsuch, but that doesn’t necessarily mean Kavanaugh leans more to the right than Gorsuch. Trump’s first Supreme Court justice is very conservative.

Protesters are more concerned about the shifting balance of power on the Court if Kavanaugh is confirmed. Gorsuch was replacing the late Justice Antonin Scalia (a noted conservative). Kavanaugh, if confirmed, would take the place of Justice Anthony Kennedy, one of the court’s most prominent swing votes.

“The difference between Gorsuch and Kavanaugh [was] a very conservative judge was replacing another conservative judge,” Mauter said. “While we didn’t want that to happen, it didn’t change the balance of the court.”

That fact, plus the emerging allegations, first reported in the Washington Post and the New Yorker, respectively, that Kavanaugh attempted to force himself on Ford when the two were high school and drunkenly exposed himself to Ramirez when the two were freshmen at Yale University, has stirred protests to a fever pitch.

It’s a different scene than Justice Clarence Thomas’s confirmation hearings in 1991, when Thomas accuser Anita Hill testified about the justice’s sexual harassment toward her and other women.

Hill testified in front of an all-male Senate Judiciary Committee who made it clear they were not taking her allegations seriously. More than 1,600 African-American women took out an ad in the New York Times after their shock and anger that he had made it through the confirmation process successfully. Thomas famously called the controversy around Hill’s testimony a “high-tech lynching.” He was eventually confirmed.

Activists say they don’t want a repeat of 1991. On Monday, a group of men — led by ALS patient and activist Ady Barkan — were arrested in the Capitol as a show of solidarity with women survivors of sexual assault. People shared their own stories of being harassed or assaulted, all before being arrested by Capitol police.

Activist @AdyBarkan, who has ALS, is being led away by Capitol police right now. Anti-Kavanaugh protest has mostly been broken up. pic.twitter.com/GxomocgsqX

“It was powerful for women to see men get arrested,” Sarsour said.

Ford and Kavanaugh are supposed to testify in front of the Senate on Thursday, even as Ford says she is receiving death threats and has had to move her family out of her home for going public with her story. Kavanaugh, meanwhile, has continued to insist both Ford and Ramirez’s stories didn’t happen, most recently in a Monday night interview with Fox News.

On Thursday, women activists plan to protest silently around the Capitol building in a show of support for Ford. They will wear T-shirts emblazoned with her name and the phrase “I believe women.”

“We will be outside, we will be there,” Sarsour said. “We hope she knows we’ve got her back.”

A few activists said they used to think Kavanaugh’s eventual confirmation would be inevitable, but they now see a glimmer of hope that his confirmation to the Court can be stopped. Republicans desperately want to confirm the judge before the November midterms; if Democrats succeed in an unlikely chance to retake the Senate, it would be much more difficult for Republicans to confirm a conservative justice to the court. And Kavanaugh is considerably more embattled with the allegations hanging over his head.

“Over the last six to seven weeks, I have begun to have a sense of optimism,” said Ana Maria Archila, co-director of CPD Action, one of the groups organizing the protests.

The House is about to start piecemeal immigration reform
Jeff Bezos says the National Enquirer’s owner threatened to release his “d*ck pick,” so he described...
Independence Day started the most American of movie traditions: massive advertising campaigns
Americans were asked to name the best president of their lifetime, and Obama won
Yes, you can travel this summer. But should you?
Cory Booker on why Democrats should go bolder on gun control