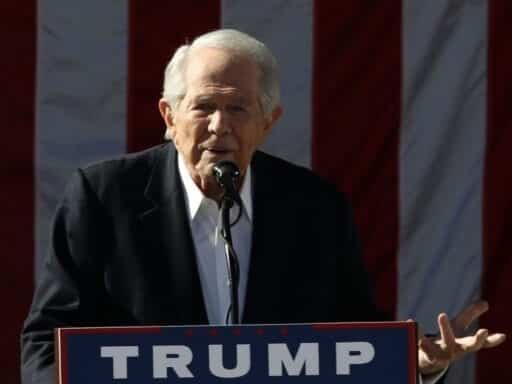 A major evangelical leader has spoken in defense of US-Saudi relations after the apparent killing of journalist Jamal Khashoggi in a Saudi consulate, saying that America has more important things — like arms deals — to focus on.

Pat Robertson, founder of the Christian Broadcasting Network, appeared on its flagship television show The 700 Club on Monday to caution Americans against allowing the United States’ relationship with Saudi Arabia to deteriorate over Khashoggi’s death.

“For those who are screaming blood for the Saudis — look, these people are key allies,” Robertson said. While he called the faith of the Wahabists — the hardline Islamist sect to which the Saudi Royal Family belongs — “obnoxious,” he urged viewers to remember that “we’ve got an arms deal that everybody wanted a piece of…it’ll be a lot of jobs, a lot of money come to our coffers. It’s not something you want to blow up willy-nilly.”

Robertson praised the approach of President Donald Trump, who has publicly cast doubt on the allegations against the Saudis, comparing them to those of sexual assault against Supreme Court justice Brett Kavanaugh earlier this month. On Wednesday, after the New York Times reported that it had obtained audio of Khashoggi being tortured, murdered, and dismembered inside the consulate, Turkish newspaper Yeni Safak reported that Trump said that he had requested the recording, “if it exists,” later adding “I’m not sure that it exists.”

Pat Robertson responds to reports that the Saudis murdered a journalist by telling everyone to calm down and focus on the important things, like the lucrative arms deal we have with them. pic.twitter.com/06b7s3R6Xe

A day later, Robertson doubled down, reappearing on the network to dismiss calls for any form of reprisals against the Saudis as “ill-advised,” in part because of Saudi Arabia’s hardline stance against Iran, whom Robertson identified as a bigger threat.

“You’ve got one journalist — who knows? Was it an interrogation? Was he assassinated? Were there rogue elements? Who did it?…You’ve got $100 billion worth of arms sales…we cannot alienate our biggest player in the Middle East.”

Khashoggi, a Saudi citizen and longtime critic of the Saudi Royal Family, was a permanent resident of the United States, where he moved after determining that it was unsafe to remain in his home country. Khashoggi spent the past year as a columnist for the Washington Post, where he regularly published incendiary articles critical of Saudi Arabia and its leadership.

Khashoggi disappeared two weeks ago in Istanbul during a routine visit to the Saudi consulate there to attain documents for his upcoming marriage.

Robertson’s stance is in keeping with his wider, full-throated support for President Trump’s policies over the past few years. Since Trump’s inauguration, the Christian Broadcasting Network has become a de facto propaganda channel for the administration, running programs that, for example, suggest that Donald Trump was chosen by God to become president. In return, Robertson has frequently been granted rare access for sit-down interviews with Trump, during which he typically throws Trump softball questions.

It’s unclear whether Trump’s stance on Khashoggi will change as a result of the Times’ latest reporting. For now, he maintains that the Saudis should be considered — like Brett Kavanaugh — innocent until proven guilty, and that “rogue killers” may be behind Khashoggi’s disappearance. Trump has previously praised Saudis as spending “$40 or $50 million” buying Trump properties, and members of the Royal Family have frequently stayed in Trump properties, or in one case, paid to stay without actually turning up, a move that significantly improved the Trump Hotel International’s annual revenue.

Earlier this week Secretary of State Mike Pompeo met with Saudi Crown Prince Mohammed bin Salman, who may have been responsible for Khashoggi’s assassination, for a smiling photo op.

Within this context, Robertson’s comments make perfect sense. Throughout the Trump administration, the role of CBN has consistently been to legitimize the president’s actions to his white evangelical base. During the migrant family separation crisis, for example, longtime Trump advisor (and prosperity gospel preacher) Paula White appeared on the channel to remind viewers that Jesus never broke immigration law to support the idea that Christians should not feel sympathetic toward refugees on the grounds that Jesus — according to the Biblical account of his time in Egypt in infancy — was one, too.