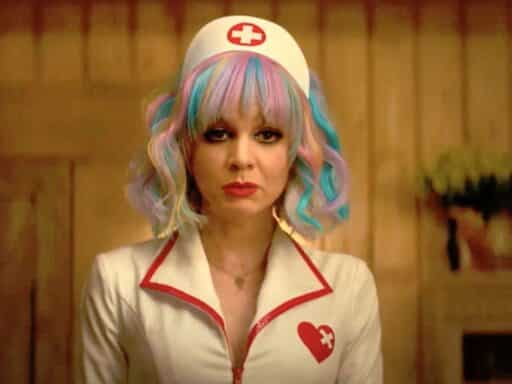 Promising Young Woman, with a crackling performance from Carey Mulligan, never apologizes for finding the pleasure in revenge.

One of the best things that can happen to you watching a movie is realizing the movie has become your new favorite. It isn’t straining or bargaining for your attention; instead, every image is speaking to you crystal clearly. Each moment is equal parts treasure and dread, satisfying your eagerness to see more even as it means getting closer to the movie’s eventual end. And when you’ve found a movie you like that much, you never want it to end.

Around 10 minutes into Emerald Fennell’s blistering Promising Young Woman, I realized that it would be my favorite movie of 2020.

It’s Fennell’s first feature-length film as a director, a debut that’s forged with unceasing purpose. The film’s use of neon candy pinks, its star’s striking choice of nail polish, the soundtrack, the casting, the drama imbued in every shot, no matter whether it’s an extreme close-up of just-smacked bubblegum or a wide shot of a bleak overpass, our electrifying heroine (played by Carey Mulligan) — it all works in unison to deliver a mesmerizing film wrapped around Fennell’s savage idea. Fennell asks us: Could we find pleasure in watching a vindictive woman force men to face the pain they’re capable of? The answer is a resounding yes.

At the same time, Fennell and Promising Young Woman offer something more surreal than the revenge thriller premise might let on. The movie asserts that vengeance can consume our souls and chip away the bits of us capable of love and vulnerability. At some point, that rots our humanity. But Fennell then asks if such an utter unfurling of our morality, something we would never allow in our real lives, could be its own forbidden fantasy.

At the heart of Promising Young Woman is Cassie Thomas, a former med school student who dropped out, moved back in with her parents, and works a dead-end job as a barista. Like a wicked anglerfish, she seeks out prey each night by offering up her body as bait. She pretends to be blitzed out of her mind at bars that she stumbles around alone, heavily made up. Men, the kind who are definitely self-professed “nice dudes,” are drawn to Cassie’s irresistible, inebriated luminescence. They end up offering to take her home as a chivalrous gesture, but they are really gunning to take her to their home, because they think she’s too drunk to say no. This line of thinking — that having sex with someone who’s too drunk to object is okay — has been ingrained into their behavior, into their subconscious. But when they take Cassie home and attempt to force her to have sex with them, that’s when the bait turns into switch, and prey becomes predator.

As I watched Mulligan flip these scenes on their heads, all I felt was exhilaration. Cassie sharpens in seconds: Her wooziness tightens into an airless, shivery menace. She weaponizes her thin frame into a terrifying figure, and her voice deepens as she asks her “nice guy” suitor, “What are you doing?” Somehow, Mulligan takes these scenes into territory that feels like it could, in a blink of an eye, become violent, if not all-out body horror.

Teaching these attempted date rapists a lesson seems like a good enough reason to fool them by feigning drunkenness. But it turns out that Cassie’s night prowling is driven by a personal desire to dull her own pain. Her lifelong best friend and fellow ex-med-schooler Nina was raped by a classmate named Al and never psychologically recovered. No one but Cassie believed Nina, and no one but Cassie helped her. Watching Nina wither to the point where she took her own life convinced Cassie to do everything in her power to make sure what happened to Nina never happens to any other woman.

It becomes clear that Cassie’s hunts are all that makes her feel alive. Revenge and pain are her alternatives to all-consuming sadness. Every morning after she scares men straight, Cassie returns home to her emotionless normal. She talks in one-word responses to her family, and barely says more to her only friend, her boss at work. She doesn’t feel. She stares blankly. She forgets her own birthday. I doubt she’d be able to find the sweetness in the pastries that her coffee shop sells.

In Mulligan’s capable hands, you can feel Cassie’s strangling depression. Mulligan seeks out the kernels of Cassie’s blankness, subtly homing in on the despair. And there’s relief when day gives way to night and Cassie sets out to hunt again, because seeing her in such relentless pain is distressing. Mulligan makes us really feel for a character who would rather not feel much at all, herself.

I’m part of the sliver of the movie-watching population who believes Mulligan deserved the Best Actress Oscar for playing Jenny, another promising young woman, in 2009’s An Education. (Instead, she walked away with a nomination; Sandra Bullock won for The Blind Side that year instead.) Coincidentally, that movie is also about a man taking advantage of a girl and all but ruining her life. Here, Mulligan is hardened as a woman in her 30s, but just as dazzling as she was as a young 20-something. She makes Cassie’s menace thrilling, but gives us just enough vulnerability to show you that this character is more than just a power fantasy. She’s a tragedy. If there’s any such thing as justice, Mulligan should be taking home the Oscar in April.

Promising Young Woman is a fantasy about personal obliteration

As Cassie becomes more and more addicted to her nice guy stings, her need for revenge threatens to consume her entirely. She’s so unpleasant to be around that her parents want her out of their house. She can’t really date anyone without wanting to test them to see if they’ll take advantage of her. She’s awful at her coffee shop job, which seems like more a nice favor from her boss than an actual, meaningful job.

Despite all of this, a friendly pediatric surgeon — and Cassie’s former med school classmate — named Ryan (Bo Burnham) reappears in her life and is very interested in her. His arrival coincides with Cassie’s best chance to get even with the man who raped Nina. Her mutual feelings for Ryan force Cassie into the toughest decision of her life: Is Ryan, a guy who’s good on paper and winsomely handsome, really going to be the person Cassie will give up avenging Nina for? Or is Cassie so far consumed by revenge that she’ll never really be human again?

There are some points where the script is a little too on-the-nose, making it sometimes feel like Cassie is throttling egregious permutations of Brock Turner and his apologists. Some plainly state their intentions, or bluntly say something so infuriating, that there’s maybe something too convenient about how evil is presented. This is especially true when reality has taught us that the most monstrous “nice guys” and their apologists know how to work a system.

But these real-life frustrations colliding with Cassie’s fantasy adds to the devastating pleasure of her revenge plot.

Fennell’s dark magic is unapologetically asking the viewer if that obsession is really so bad. The fantasy shifts from a focus on getting even to something more harrowing. Cassie is presented with the chance to fully succumb to her rage and vengeance and obliterate the life she once had, even if she was hardly tethered to it. It won’t bring Nina back, but it might give Cassie some closure. Promising Young Woman proves to be just pure, unfiltered revenge and personal destruction, and what it says about us — our taste for revenge, the current reality where “nice guys” get second and third chances, our own morality — if we find it thrilling.

Promising Young Woman is in theaters and will be available for on-demand rental on January 15, 2021.