Protesters at the Nevada Democratic debate were immigrant rights activists 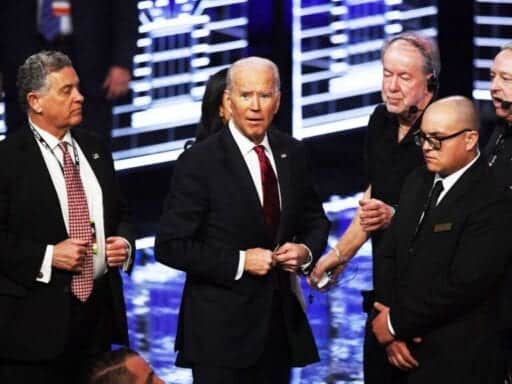 The protesters also yelled, “You deported 3 million people!” in reference to the record-high deportations that occurred during Biden’s time as vice president, for which advocates called former President Barack Obama the “deporter in chief”:

BREAKING: We are interrupting @JoeBiden at the #DemDebate chanting #DontLookAway and #NoKidsInCages. We need a Democratic candidate to adopt the #MigrantJusticePlatform and commit themselves to improve the lives of migrants and refugees! https://t.co/AfnRR2QxcS

RAICES was the same group responsible for exhibitions of children covered in mylar blankets in chain-link cages throughout Des Moines ahead of the Iowa caucuses, including at caucus sites and the city hall. Each installation played a real recording of a child who was kept in detention.

“The horrors at our border and throughout our immigration system are too often ignored by the public and politicians,” Erika Andiola, chief advocacy officer at RAICES, said in a statement before the Iowa caucuses. “We’re asking people in Iowa and across the country: Don’t look away from the terrors enacted in your name. This anti-immigrant crackdown has to end.”

It’s not the first time that Biden has faced protesters during the Democratic debates. During the September debate, four beneficiaries of Deferred Action for Childhood Arrivals, the program giving legal protections for young unauthorized immigrants, interrupted his closing remarks with chants of “We are DACA recipients! Our lives are at risk!”

Biden has closely tied his candidacy to his time as Obama’s vice president. His immigration plan even repeatedly mentions Obama’s accomplishments, including the former president’s efforts to offer legal status to certain unauthorized immigrants and pass comprehensive immigration reform. But Biden has also struggled to answer to persistent criticism of immigration enforcement tactics under the Obama administration, particularly in the first four years of his presidency — and activists seem determined to remind him of that fact.