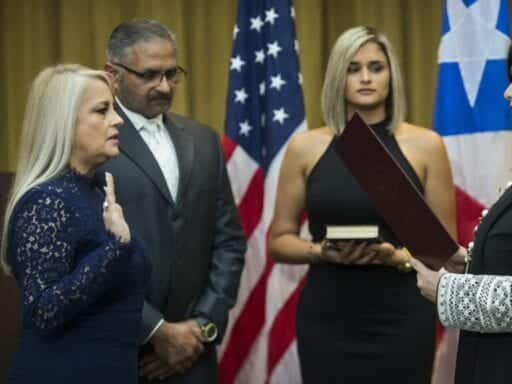 Gov. Wanda Vázquez was sworn in after Puerto Rico’s Supreme Court booted out the man who declared himself governor last week.

Puerto Rico has had three governors in less than a week.

On Wednesday, Puerto Rico’s Supreme Court booted out the man who had declared himself governor on Friday, leaving the US territory temporarily leaderless. But by the end of the day Wednesday, Justice Secretary Wanda Vázquez had been sworn in as the new governor.

The dizzying turn of events started Wednesday afternoon, when the court’s seven justices invalidated Friday’s swearing-in of Pedro Pierluisi, a lawyer and former politician whom former Gov. Ricardo Rosselló had nominated to replace him. Rosselló resigned after 12 days of anti-government protests in San Juan in response to corruption and social media scandals.

Rosselló had handed over the governor’s mansion to Pierluisi before leaving office at 5 pm Friday, even though the Senate had yet to vote on his confirmation. That set up a battle with Senate Majority Leader Thomas Rivera Schatz, who is also a member of the pro-statehood party and was reportedly jockeying for the position of governor. He filed a lawsuit Saturday, claiming that Pierluisi’s appointment as governor was unconstitutional without Senate confirmation.

“The Hon. Pedro R Pierluisi Urritia cannot continue in the role of governor from the moment this opinion and ruling goes into effect,” the court wrote.

Puerto Rico’s constitution lays out a line of succession for the governorship, which placed Justice Secretary Wanda Vázquez next in line. She previously said she doesn’t want the position, and protesters have threatened to kick her out too. On Wednesday, Vázquez said she would take the position, though it’s unclear how long she might last. Sources told El Nuevo Día newspaper that she plans to resign after nominating Jennifer González-Colón to replace her as governor. González-Colón is Puerto Rico’s non-voting delegate to the US House of Representatives, and may be able to get enough confirmation votes to succeed Vázquez.

The turn of events adds more chaos to an unprecedented moment in Puerto Rican history. Hundreds of thousands of protesters had taken to the streets in recent weeks, demanding a complete change in direction for Puerto Rico’s government, which has been plagued with corruption scandals for decades. They succeeded in kicking out the sitting governor, but now it’s still unclear who will be in charge next week.

Whoever does end up in the governor’s mansion has a lot of work ahead.

Puerto Ricans have been patient through decades of government incompetence and corruption, and they’ve had enough. They’re bearing the burden of Puerto Rico’s bankruptcy, the lingering economic recession, and the botched response to Hurricane Maria. But two recent scandals sent them over the edge.

In July, the FBI arrested two former cabinet officials in Rosselló’s government as part of a corruption probe over their handling of $15.5 million in post-hurricane contracts. The officials, former Education Secretary Julia Keleher and Ángela Ávila-Marrero (former chief of Puerto Rico’s Health Insurance Administration), are accused of funneling the government contracts to businesses they had personal ties to.

Then, three days later, investigative reporters on the island published leaked Telegram app messages that showed Rosselló and his inner circle joking about casualties from Hurricane Maria and ridiculing political rivals with violent, homophobic, and sexist language. Two government officials who were part of the chat — the secretary of state and a government representative on the bankruptcy oversight board — have since resigned, leaving two key positions unfilled.

The incidents triggered the largest government protests in modern Puerto Rican history, surfacing decades of pent-up public anger at the island’s two main political parties. Rosselló’s pro-statehood New Progressive Party and its rival, the anti-statehood Popular Democratic Party, both bear much blame for driving the US territory’s economy into the ground while doing little to ease widespread poverty.

All the corruption allegations are taking a toll on the public, too. Elected officials in Puerto Rico have been involved in so many corruption scandals that they’re hard to keep track of. Countless government leaders have pleaded guilty to charges accusing them of accepting bribes and giving government contracts to businesses they favor. For example, the last time the anti-statehood party was in power, in 2008, the FBI arrested a dozen government officials on charges of money laundering and campaign finance violations. The governor at the time, Aníbal Acevedo-Vilá, was arrested, too (though he was acquitted during trial).

Frustrated voters kicked the party out of office in 2009, but the pro-statehood party now has its own corruption problems. And unlike last time, voters weren’t willing to wait until the next election to show their frustration.

After 12 days of massive anti-government protests calling for Rosselló to step down, the governor agreed to leave by 5 pm on Friday. Then another crisis unfolded.

When Friday came around, Puerto Ricans still didn’t know who would replace Rosselló when he left the governor’s mansion.

The Puerto Rican Senate leader said he could not get enough votes Thursday to approve Rosselló’s pick for the position: Pedro Pierluisi, a 60-year-old Puerto Rican lawyer and Washington insider.

Rosselló had just chosen Pierluisi to fill the secretary of state position in his administration, which was left vacant in July after the chat message scandal forced his predecessor to resign. If the legislature could confirm Pierluisi for the secretary of state position, that would place him first in the line of succession to the governorship by the time Rosselló left office Friday at 5 pm ET.

The local House of Representatives confirmed Pierluisi, but not the Senate.

Many senators from Rosselló’s party were uneasy about Pierluisi. He’s spent the past few years working for a Washington, DC, law firm that provides legal counsel to the federal oversight board monitoring Puerto Rico’s bankruptcy. Many Puerto Ricans hate the oversight board, which has inflicted severe austerity measures on the island. Pierluisi has stepped down from that job, but Puerto Ricans suspected that he would have supported the board’s demands to cut pensions and pay for teachers and other public-sector workers as governor.

With Pierluisi’s Senate confirmation invalidated by the Supreme Court, the job of governor fell to the person second in the line of succession: Vázquez, as the Puerto Rican constitution dictates. But as was previously mentioned, she said she doesn’t want the job either, and protestors have threatened to kick her out, too.

In short, although Vázquez is now the territory’s governor, she may not remain in the post until Puerto Rico’s 2020 gubernatorial election; however, there aren’t currently a lot of good options for people who could replace her.

On the surface, Pierluisi seemed like the perfect person for Puerto Rico’s governorship. He has tons of political experience and deep connections to US members of Congress. He served as Puerto Rico’s attorney general and was elected in 2008 as Puerto Rico’s non-voting delegate to the US House of Representatives. His relationship with Speaker Nancy Pelosi and other House leaders is considered an asset as Puerto Rico fights for Congress to release more hurricane relief aide to the island.

But, like every other person whose name was floated to replace Rosselló, he has political baggage. In 2016, when he represented Puerto Rico in the US House of Representatives, the New York Times reported that he was pushing legislation that would benefit his wife’s clients on Wall Street. He was never charged with corruption, but the story raised questions about his ethics.

Another person jockeying for the governor’s seat is Thomas Rivera Schatz, the Puerto Rican Senate majority leader. But Rosselló discarded that idea after news surfaced that Rivera Schatz had reportedly steered government contracts to his relatives’ businesses. The editorial board of El Nuevo Día, the largest newspaper in Puerto Rico, has accused Schatz of holding up the vote to confirm Pierluisi because he wants the job himself.

Then there’s Vázquez. She has baggage, too. Vázquez angered the public for reportedly refusing to investigate the reason why tons of hurricane supplies were abandoned in fields and never distributed to survivors. She also ignored public demands to investigate a recent spike in violence against women. So protesters have threatened to drive her out of office the same way they drove out Rosselló.

#WandaRenuncia is a message as clear as Rosello’s. She already has a history in corruption and incompetence and the people of Puerto Rico are set on cleaning out the government.

It still seems likely that Vázquez may resign with or without public pressure. But now she has the power to nominate someone to succeed her. Hopefully, that someone will have enough support from both chambers of Congress and from the public to govern effectively. Whether there is a public official in Puerto Rico who meets both those criteria, however, remains to be seen.

The New Hampshire primary matters more than ever this year
Corporate monopolies are hiding in your grocery aisle
The best $2,000 I ever spent: many, many rounds of bingo
Why the US and Iran are fighting over this tiny waterway
The US Covid-19 epidemic hit a deadly new milestone, and help isn’t on the way
A rare bipartisan agreement on immigration reform has tanked in the Senate