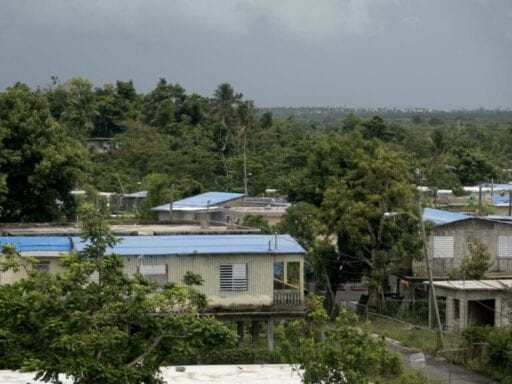 Tropical Storm Dorian is much weaker than Maria, but Puerto Rico is in a more fragile state.

Tropical Storm Dorian is heading toward Puerto Rico and is expected to make landfall Wednesday afternoon with 60 mph winds and up to 8 inches of rain. The storm is forecast to pick up strength and reach Florida as a Category 2 hurricane late Sunday, according to the National Weather Service.

For Puerto Rico, Dorian is the first major storm to strike the island since Hurricane Maria in 2017, which hit with 175 mph winds. Maria knocked down 80 percent of the island’s power lines, leaving 3.4 million Americans mired in the largest blackout in US history, and led to the deaths of almost 3,000 people.

Though Dorian is expected to be much weaker than Maria, Puerto Rico’s infrastructure, economy, and government are in a much more fragile state than they were in 2017. Thousands of blue tarps from the Federal Emergency Management Agency still cover homes across the island, a visible reminder that the recovery still isn’t complete and another disaster could happen again.

On Twitter this week, President Trump complained about how much money was allocated to Puerto Rico’s recovery effort:

Wow! Yet another big storm heading to Puerto Rico. Will it ever end? Congress approved 92 Billion Dollars for Puerto Rico last year, an all time record of its kind for “anywhere.”

We are tracking closely tropical storm Dorian as it heads, as usual, to Puerto Rico. FEMA and all others are ready, and will do a great job. When they do, let them know it, and give them a big Thank You – Not like last time. That includes from the incompetent Mayor of San Juan!

It echoes a Twitter outburst Trump had in April, where he described San Juan Mayor Carmen Yulín Cruz as “crazed.” However, it is not true that Congress approved $92 billion; the allocation was actually $42 billion, and roughly $11 billion has been spent in Puerto Rico so far. On Tuesday, Trump signed a federal emergency declaration for Puerto Rico authorizing aid and public assistance for disaster planning and relief.

Secretary of Justice Wanda Vázquez was sworn in as governor earlier this month after Puerto Rico’s Supreme Court invalidated Rosselló’s appointment of Pedro Pierluisi, a former politician, to be his successor.

There are major changes underway in the power sector as well. The Puerto Rico Electric Power Authority, the island’s public electricity utility, is effectively bankrupt and is undergoing privatization following years of neglect of the power grid and accusations of nepotism in its management. In April, Rosselló signed a law that would require Puerto Rico to reach 100 percent renewable energy by 2050.

The island as a whole is still suffering from a government debt crisis, and the US Supreme Court is expected to weigh in during its fall term.

Though a storm like Maria is unavoidable, the fact that its devastation lingered for so long stems from poor planning and mismanagement, and the recent upheaval in Puerto Rico’s government isn’t helping.

Nonetheless, Vázquez said Puerto Rico is ready for Dorian, building on the hard lessons from Maria. In a press conference on Tuesday, she said Puerto Rico is already coordinating with federal disaster agencies and is stockpiling utility poles and spare parts to avoid shipping bottlenecks after the storm. She also signed an executive order to freeze the prices of necessities to prevent gouging.

“Today, the government’s response is different in the face of this emergency,” she told El Nuevo Día on Tuesday.

Silicon Valley pours money into Biden’s campaign — and snubs Trump’s
The White House has 2 testing standards: One for Trump and another for everyone else
Trump claims he will “override the governors” who closed churches in the pandemic
Wisconsin voters are waiting in 5-hour lines in the middle of a deadly pandemic
The WHO just declared the coronavirus a pandemic. Here’s what that means.
Voters are back to worrying whether a woman can win