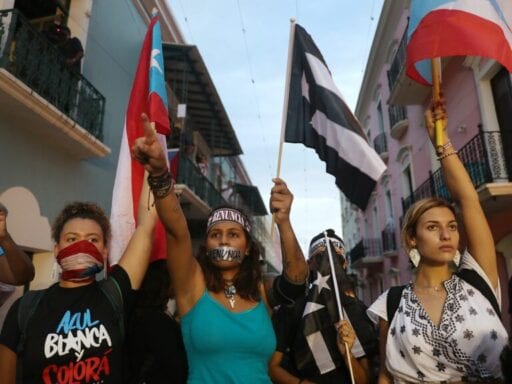 Two scandals have led to more than a week of protests calling for Gov. Ricardo Rosselló’s resignation.

Thousands of protesters demonstrated in the streets of San Juan, Puerto Rico Saturday, marking the eighth straight day of rallies calling for the resignation of the island’s governor. The crowds show no sign of ebbing, and analysts say that the protests are quickly becoming the biggest political demonstration in the US territory’s modern history.

The protests arose in response to the leak of Telegram app messages in which Gov. Ricardo Rosselló and his inner circle make light of the casualties caused by Hurricane Maria and disparage political opponents using vulgar, homophobic, and sexist language.

The text message leak came days after another scandal: The FBI arrested two former top officials in Rosselló’s government as part of a corruption probe over their handling of $15.5 million in contracts. The officials, former Education Secretary Julia Keleher and Ángela Ávila-Marrero (former chief of Puerto Rico’s Health Insurance Administration), are accused of funneling the contracts to businesses they had personal ties to, regardless of those companies’ relevant experience or ability.

The incidents have galvanized a public that feels neglected and exploited by political and economic elites, and one that has endured great suffering in the wake of Hurricane Maria in 2017 and a seemingly unresolvable debt crisis.

Calls for Rosselló’s resignation were growing following the corruption scandal; they exploded after the group chat scandal. Two cabinet officials have resigned in the wake of the scandals, but so far Rosselló has said that he plans to stay in office.

Pressure on the governor is rising, however. The protests have garnered international attention, and a number of Puerto Rican celebrities like singer Ricky Martin (who was mocked in the leaked texts), Hamilton creator Lin-Manuel Miranda, and reggaeton star Bad Bunny have backed the demonstrations.

Many politicians from the US mainland have started to weigh in on the issue as well. President Donald Trump — who has called Puerto Rican officials “incompetent or corrupt” and who has opposed increased Hurricane Maria aid to the territory — was critical of Rosselló on Twitter.

“The Governor is under siege, the Mayor of San Juan is a despicable and incompetent person who I wouldn’t trust under any circumstance, and the United States Congress foolishly gave 92 Billion Dollars for hurricane relief, much of which was squandered away or wasted, never to be seen again,” Trump tweeted on Thursday.

A lot of bad things are happening in Puerto Rico. The Governor is under siege, the Mayor of San Juan is a despicable and incompetent person who I wouldn’t trust under any circumstance, and the United States Congress foolishly gave 92 Billion Dollars for hurricane relief, much….

….of which was squandered away or wasted, never to be seen again. This is more than twice the amount given to Texas & Florida combined. I know the people of Puerto Rico well, and they are great. But much of their leadership is corrupt, & robbing the U.S. Government blind!

But a number of Democrats have also criticized Rosselló and joined calls for him to resign. Rep. Alexandria Ocasio-Cortez, whose mother was born in Puerto Rico, tweeted: “We must stand with la isla. Rosselló must resign.”

Former Secretary of Housing and Urban Development Julián Castro became the first Democratic presidential candidate to speak out about the governor, saying, “This governor can no longer be effective and I believe he should resign.”

Castro was later joined in his condemnation of Rosselló by other 2020 contenders like Sen. Elizabeth Warren and Bernie Sanders. Rep. Tulsi Gabbard even joined the protests in Puerto on Friday.

Mario Negrón Portillo, a professor at the University of Puerto Rico, told the Guardian Rosselló’s texts may be the final straw for a population that has long been fed up with its leadership.

“Everyone woke up one day and the governor was spouting vulgarities,” the professor said. “There’s nothing worse for a politician than losing legitimacy. I think Ricardo Rosselló has lost legitimacy.”

The vulgar text thread that riled up the public

The leak was explosive because it was packed with profane, derogatory, and offensive remarks toward all kinds of people in Puerto Rican life.

The messages had words that hurt citizens, such as jokes about the bodies of people who died in Hurricane Maria, and also contained ugly attacks on political rivals. For instance, Rosselló criticized Melissa Mark-Viverito, the Puerto Rico-born former speaker of the New York City Council, by saying that people should “beat up that whore.”

Christian Sobrino Vega, then Puerto Rico’s chief fiscal officer, wrote that he was “salivating to shoot” the mayor of San Juan, a political thorn in the side of Rosselló, and a politician who has challenged him for the governor’s chair.

“You’d be doing me a grand favor,” he replied.

Sobrino Vega was also behind two other messages that have drawn a lot of attention. In one text, he criticized Ricky Martin in a manner that mocked his sexuality. “Ricky Martin is such a male chauvinist that he fucks men because women don’t measure up. Pure patriarchy,” he wrote.

And Sobrino Vega also spoke flippantly of how the casualties from Hurricane Maria would play in Puerto Rican politics. He wrote, “Don’t we have some cadavers to feed our crows?” (Crows being a reference to the administration’s critics, according to CNN.)

Much of the Puerto Rican public perceived the leaks as being emblematic of the callousness and incompetence of its government. Widespread protests prompted Sobrino Vega and another official to resign. Rosselló has made it clear he has no plans to leave office, and has said, “I have not committed illegal acts. I committed inappropriate acts.”

Puerto Rico House Speaker Carlos Mendez said on Friday that an independent committee has been formed to investigate whether the governor is correct in this assertion. Mendez said the committee will determine if anything in the text thread is illegal within the next 10 days.

The $15.5 million corruption scandal that led to arrests

Days before the texting scandal, Rosselló’s government was enmeshed in another controversy. The FBI arrested two former senior officials in his administration for illegally funneling federal funding to favored businesses.

The indictment claims that Julia Keleher, the former secretary of the island’s department of education, and Ángela Ávila-Marrero, who headed the Puerto Rico Health Insurance Administration, directed funds to politically connected contractors. Effectively, the officials are accused of scheming to steal $15.5 million intended for some of Puerto Rico’s most vulnerable citizens. Both of the officials had served in the Rosselló administration until just months ago.

“Keleher and Avila-Marrero exploited their government positions and fraudulently awarded contracts funded with federal monies,” US Attorney Rosa Emilia Rodriguez-Vélez said in a statement. “The charged offenses are reprehensible, more so in light of Puerto Rico’s fiscal crisis.”

Since then US lawmakers have called for new measures to create safeguards against potential corruption, particularly around Medicaid dollars. The island has asked for more federal health care money, and Congress is currently debating that request; both Democratic and Republican lawmakers have signaled support for new guardrails, and before the text scandal came to light, Rosselló supported the measures as well.

The need for the funding remains; what is not yet clear is whether Washington will work with Rosselló or a successor to get the money to the territory’s residents.

The protests are the result of long simmering frustration

While the recent scandals mark the proximate cause of the protests roiling Puerto Rico, residents of the island have faced other frustrations in recent years.

The havoc wreaked by Hurricane Maria revealed how neglected the island’s infrastructure was prior to the storm. The aftermath also exposed indifference in Washington, as Puerto Rico has seen only a fraction of the aid it needs trickle in slowly for years.

Trump has claimed the territory has received $92 billion in “squandered” aid. But in reality Puerto Rico has only gotten about $14 billion so far — the rest of the $42.5 in approved funding is still stuck in Washington, caught up in the tedious legislative process for approving funds. The president’s tweets about the territory spending the money it has received “foolishly or corruptly” have not encouraged his allies in Congress to expedite this process.

The $92 billion number Trump cites may come from estimates in how much damage Maria caused; experts have said it will cost around $90 billion to repair the hurricane’s damage. And Arizona’s Rep. Ruben Gallego has said $91 billion is how much the island would ideally receive in aid over the next 20 years.

Puerto Rico also has many economic woes not tied directly to the hurricane. In 2018, the government announced harsh austerity measures in response to the island’s massive debt crisis that led to short-lived protests. The economic situation in general has left some residents under strain; currently the unemployment rate hovers around 9 percent and more than 40 percent of Puerto Rico’s residents live in poverty.

All this is to say: the latest protests are about a lot more than offensive texts.

11 of 2020’s best TV shows, video games, podcasts, and more
5.2 million people can’t vote due to their felony record, according to a new report
Wall Street investors want Twitter CEO Jack Dorsey out. They might get their way.
Trump’s presidential campaign is Too Online
Facebook deleted a Trump post that falsely claimed the flu can be more deadly than Covid-19
Why the CDC changed its Covid-19 quarantine guidelines