Pulitzer Prize-winning poet Tracy K. Smith on the purpose and power of poetry 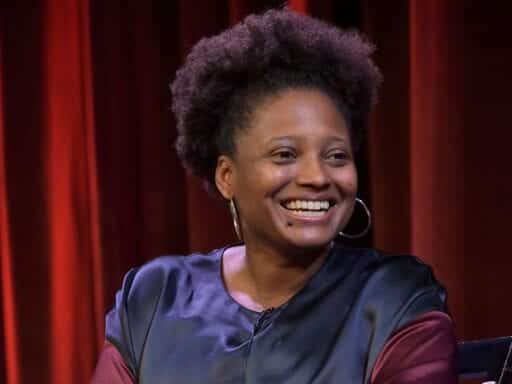 The two-time American poet laureate joins The Ezra Klein Show for a powerful conversation on love, language, and more.

It’s the rare podcast conversation on The Ezra Klein Show where, as it’s happening, I’m making notes to go back and listen again so I can fully absorb what I heard. But this is that kind of episode.

Tracy K. Smith is the chair of the Lewis Center for the Arts at Princeton and a Pulitzer Prize-winning poet, and was the two-time poet laureate of the United States from 2017 to 2019. But I’ll be honest: she was an intimidating interview for me. I often find myself frustrated by poetry, yearning for it to simply tell me what it wants to say, aggravated that I can’t seem to crack its code.

Preparing for this conversation, and even more so, talking to Smith, was a revelation. Poetry, she argues, is about expressing “the feelings that defy language.” The struggle is part of the point: you’re going where language stumbles, where literalism fails. Developing a comfort and ease in those spaces isn’t something we’re taught to do, but it’s something we need to do. And so, on one level, this conversation is simply about poetry: what it is, what it does, how to read it.

But on another level, this conversation is also about the ideas and tensions that Smith uses poetry to capture: what it means to be a descendent of slaves, a human in love, a nation divided. Laced through our conversation is readings of poems from her most recent book Wade in the Water, and discussions of some of the hardest questions in the American, and even human, canon. Hearing Smith read her erasure poem, “Declaration” is, without doubt, one of the most powerful moments I’ve had on the podcast.

There is more to this conversation than I can capture here, but to say it simply: this isn’t one to miss, and that’s particularly true if, like me, poetry intimidates you.

Here’s a lightly edited transcript of part of our conversation, which we released this week on The Ezra Klein Show

I’d like to start with something you said at a lecture at the Library of Congress. “Poetry is not the language we live in. It’s not the language of our day-to-day errand-running and obligation-fulfilling, not the language with which we are asked to justify ourselves to the outside world. It certainly isn’t the language to which commercial value has been assigned.” So, what language is poetry?

Poetry is the language that sits really close to feelings that defy language. Poetry nudges some of our feelings of joy or confusion or desire toward feelings that we can recognize and describe. I take solace in the fact that it’s poems that we turn to in big moments of change — like the loss of someone or a marriage or the birth of a child — because poems are resourceful for finding terms that remind us of what we live with but don’t always bring into speech.

I’m somebody who has had many periods of my life where I tried to learn to read poetry better, and I’ve often become frustrated. It was really reading your work that helped me understand that maybe some of my frustrations were part of the point and not a failure.

I love the idea that poetry is about the “feelings that defy language” because I always understood poetry to be a kind of technical mastery of language. But when I read a lot of your work it seemed that you’re saying that actually, poetry is about the shortcomings of language. The ways in which poetry sometimes becomes difficult to read are signaling the ways in which language becomes insufficient for what we need to communicate.

As a poet there is a certain degree of mastery that is required to even get into the gray zone of feeling and what sits beyond the reach of language. I think poets work really hard to create the scaffolding or the formal mechanism for these big questions to take shape within. But the fact of language, even the beauty of language, is secondary to the larger work of the poem, which I think is to enter into that uncharted emotional territory or to bring us — with a greater sense of courage and resourcefulness — toward the things that are just messy, overwhelming, rife with conflict or contradiction. And those are the things that live on the surface of social life. So poems tread in that direction and they do something to give us a sense of what we feel, what we’re a part of, and what that means.

That reminds me of something else you said in that lecture: “The features of a poem insist upon a different value system. Rather than numbing or drowning out the difficult-to-describe but urgently sensed feelings that are part of being human, poetry invites us to tease them out, to draw them into language that is rooted in intricate thought and strange impulse.”

I think this is why I’ve often been intimidated by poetry as somebody who’s a very linear thinker. I do politics. I read narrative nonfiction. So I get frustrated when I don’t know what a poem is trying to tell me — I want the author to just say what they mean. But that’s part of the fact that poetry is insisting on a different logic and is trying to pull out a different part of how we perceive the world. And maybe working on that part of ourselves or trying to rest in that struggle is valuable in a way that our market-dominant culture understates.

There’s a forward or an outward-facing part of our lives that is constantly urging us to pronounce, to explain, and to manifest some sense of authority: This is why you’re wrong. This is why I’m right. This is what we need to do to fix the situation. That’s great in many contexts, but it’s also true that there are many views that can be simultaneously right. And a poem might help us to be comfortable acknowledging that.

In the realm of art, it’s great to say, “In this moment of the poem, it seems like there’s a lot of joyful energy. I’m feeling bright and I’m feeling happy, but then I get into the next stanza and things get dark. So which is it?” And sometimes the answer is it’s both. There’s a moment when there’s something that’s bright and positive and then there’s a moment that things change. What does it feel like to live with the possibility of that change? What does it feel like to acknowledge that both are natural?

I have this belief that getting comfortable with that in the context of art or in the context of feeling can make us better equipped to deal with all of the contradictions and simultaneous truths that exist in other contexts, like society and community. Those are places where there are a lot of simultaneous truths that we’re asked to consider, and maybe even validate it from one moment to the next.

I wanted to see if you’d be up for reading your poem, “Declaration,” because I think it speaks to what you’re saying here.

Okay. I’ll tell you a little bit about how this poem got written. It’s an “erasure” of the Declaration of Independence. I set out to read the Declaration of Independence and see what it might teach me about who America was and who it is. So I was listening for another voice or another line of reasoning beneath the surface voice of that text. It started out as a willful act: If I delete these words, then my sentence veers in this other direction. But as I got further into the poem, it seemed less like I was making these really deliberate choices and more like I was hearing a logic that was gathering force. And what I heard in my rereading of the Declaration of Independence was a story about the nature of black life in this country from the very beginning:

sent hither swarms of Officers to harass our people

He has plundered our—

destroyed the lives of our—

abolishing our most valuable—

and altering fundamentally the Forms of our—

In every stage of these Oppressions We have Petitioned for Redress in the most humble terms:

Petitions have been answered only by repeated injury.

We have reminded them of the circumstances of our emigration and settlement here.

on the high Seas

There is a parallel journey that I can decipher here from the original founders of this nation and their grudge or their grievance against England as the colonial power and then this other population that has a similar trajectory that also has a kind of grievance. What can one learn from the other and what does seeing that similarity do to our sense of possibility or to our willingness to listen? I think the fact that the poem is really announcing its relationship to the original text is a way of saying, can we talk about this?

We’re in a fight right now in America about whether accepting other parts of our historical narrative as true means erasing ones that we’re very committed to. I’ve had Nikole Hannah-Jones on The Ezra Klein Show to talk about the 1619 project. And one of the reactions I think people have to that project is that if it is true, then can what I believe about America also be true? The things I was taught, the things I want to believe about the country that I’m from.

What I think is so striking about that poem is that it makes clear that in some ways the Declaration of Independence is a more direct description of what America did to African Americans than what was done by Britain to America. And yet it doesn’t make the Declaration wrong or untrue. That was also a viable list of grievances against Britain. The fact that they can both be true at some time at the same time is something I think we have a lot of trouble with.

I think that goes back to what we were just talking about. We are trained to think one truth must replace another. One possibility must override another when in reality there are these different gradations that speak to one another, indict one another, and also maybe make space for a really creative composite view of history.