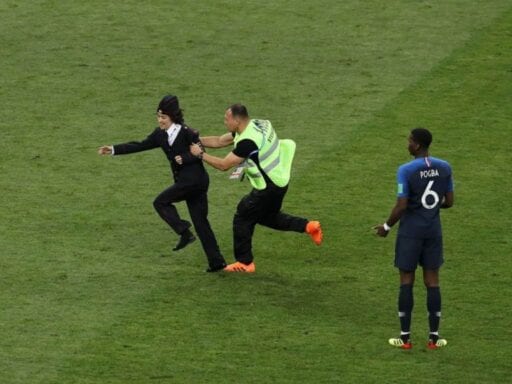 One of the field invaders got a high-five out of Mbappe.

Pussy Riot says it is behind the four people who ran onto the field during the World Cup final between France and Croatia on Sunday.

The Russian feminist protest group and punk band, which rose to global prominence for speaking out against Russian President Vladimir Putin, took responsibility for the act on Twitter, saying it was a protest against “illegal arrests” and the lack of political competition in Russian.

Four people ran onto the field during the 52nd minute of the World Cup’s final on Sunday between France and Croatia wearing police uniforms. One of the members of the Croatian team, Dejan Lovren, helped a male protester be detained. One woman high-fived French player Kylian Mbappe.

Pussy Riot rose to prominence in 2011 and 2012 for their anti-Putin provocateur performances. Two of the band’s members were jailed in 2012 for two years after they were found guilty of hooliganism.

Pussy Riot said the stunt was meant to salute Dmitri Prigov, a Russian artist and Soviet Union dissident who died 11 years ago. Prigov often used the imagery of a policeman in his poetry — a legacy the World Cup protesters paid homage to by dressing as police.

On its Facebook page, the band explained the tie-in with Prigov and listed out the demands behind the stunt, including freedom for political prisoners and permission for political competition in Russia.

The group also mentioned Oleg Sentsov, a Ukrainian filmmaker and outspoken critic of Russia’s annexation of Crimea who was sentenced to 20 years in Russian prison on terrorism charges. He declared a hunger strike in May that has been an ongoing political backdrop to Putin’s otherwise triumphant World Cup.

US President Donald Trump, who will meet with Putin for a summit in Helsinki on Monday, congratulated France for its World Cup victory in a tweet on Sunday. He also congratulated Putin.

Congratulations to France, who played extraordinary soccer, on winning the 2018 World Cup. Additionally, congratulations to President Putin and Russia for putting on a truly great World Cup Tournament — one of the best ever!

Road diets: designing a safer street
Anatomy of an executive order: What President Trump’s order on family separation does
Minneapolis officer Derek Chauvin charged with murder in the death of George Floyd
The deep political meaning of a quarantine haircut
You, now streaming on Netflix, tilts the rom-com into postmodern horror
WikiLeaks says it published ICE employees' LinkedIn profiles