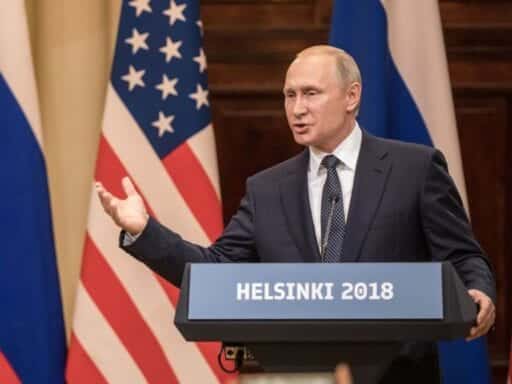 Trump called it an “incredible offer.”

That is not a joke.

It’s the “interesting idea” Trump mentioned during the press conference after Monday’s closed-door meeting between the two leaders. An idea he said Putin proposed to address Russian involvement in America’s last election and its potential interference in future ones (including the 2018 midterm elections).

Apparently, the Russian president suggested that he send his own people to investigate the 12 named Russian employees of the GRU (the country’s military intelligence agency) indicted Friday by special counsel Robert Mueller. They were charged in connection with the hacking into the email server of the Democratic National Committee (DNC) and the publishing of hacked emails under the guise of “lone hacker” Guccifer 2.0.

During today’s meeting, I addressed directly with President Putin the issue of Russian interference in our elections. I felt this was a message best delivered in person. Spent a great deal of time talking about it. President Putin may very well want to address it and very strongly, because he feels strongly about it. He has an interesting idea.

Putin did, in fact, address the allegations “strongly” — which is to say, he denied any meddling in the election. And to prove it, he said, he would have Russian law enforcement question the indicted individuals themselves — and even allow members of Mueller’s investigative team to sit in on the questioning:

We have an existing agreement between the United States of America and the Russian Federation, an existing treaty that dates back to 1999: the mutual assistance on criminal cases […] This treaty has specific legal procedures we can offer. The appropriate commission headed by Mueller, he can use this as a solid foundation and send an official request to us so that we would interrogate, hold questioning of these individuals who he believes are privy to some crimes. Our enforcement are perfectly able to do this questioning and send the appropriate materials to the United States.

Moreover, we can meet you halfway. We can make another step. We can actually permit representatives of the United States, including the members of this very commission headed by Mr. Mueller, we can let them into the country. They will be present at questioning.

Putin said he’d allow members of Mueller’s team into Russia only if the US allowed to reciprocate — to allow Russian operatives into the US. Specifically, Putin mentioned allegations against financier and vocal Putin critic Bill Browder — who he accused of funneling (along with his associates) $400 million in donations to Hillary Clinton’s campaign.

In other words, this is Putin’s “interesting idea” to address exhaustively documented allegations that employees of the Russian government tried to interfere in the 2016 presidential campaign by hacking into, and publishing, private emails from one major party in the campaign:

But if Putin offered a quid pro quo, Trump appears to have heard only a favor. He later praised Putin for his willingness in cooperating in the investigation into his own government:

It is “incredible” — in that it is extremely hard to believe that a government whose employees are being investigated by a foreign country is going to participate, in good faith, in that investigation while denying out of hand that any wrongdoing took place. But Trump appears to believe just that.

How to talk about race right now
The movie Cats doesn’t even know what the musical Cats is about
A year into the pandemic, shame still doesn’t work
Watchmen plunges straight through the funhouse mirror into another 2019
Jared Kushner is trying to sell his Middle East plan at a conference in Bahrain
My family had the same virus as Trump, but not the same privilege