Putin may have given Trump a soccer ball with a microchip in it. It’s not what you think. 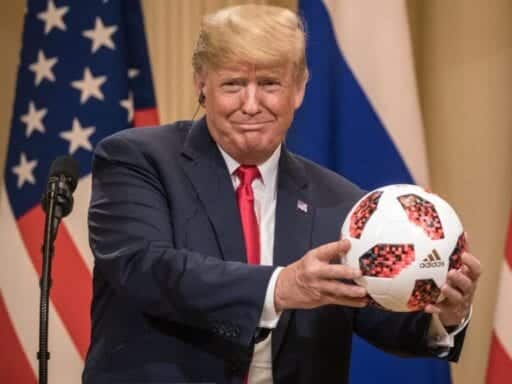 The Russians probably aren’t spying on the US president with sports equipment.

“If it were me, I’d check the soccer ball for listening devices and never allow it in the White House,” Sen. Lindsay Graham (R-SC) tweeted after Russian president Vladimir Putin gifted Donald Trump a soccer ball during their press conference in Helsinki, Finland last week.

Finally, if it were me, I’d check the soccer ball for listening devices and never allow it in the White House.

Turns out the soccer ball — which resembled Adidas 2018 FIFA World Cup ball — might have been equipped with a chip commonly used in sports equipment.

The chip, if it’s installed, can connect with a cell phones so people can get exclusive content and other updates. This “NFC” — Near Field Communication — technology appears in a lot of sports equipment and apparel, to disappointment of those hoping for an Americans-esque espionage plot. (It’s the same technology used to pay with your phone. Vox’s Dylan Matthews has a similar chip in his hand.)

Bloomberg first spotted the logo for the NFC tag on the ball, which indicate it could have been turned to Trump over with that chip. (It could also have been removed, or have been a different ball than the one Adidas is selling.) The White House told Bloomberg that Putin’s present had undergone “the security screening process that is done for all gifts,” but wouldn’t elaborate further on security procedures.

Adidas declined to comment to Bloomberg as to whether this chip could be co-opted by Russian spies, but per Bloomberg, the Adidas website indicates the “it’s not possible to delete or rewrite the encoded parameters.”

So Putin probably wasn’t conspicuously planting a bug with the president. But Graham’s initial comments aren’t totally far-fetched. The Soviet Union was notorious for trying to bug the United States during the Cold War, and did a pretty decent job of it, as a Politico story from last May noted. There were concerns about the security risks during Trump’s Oval Office meeting with Russian foreign minister Sergey Lavrov and Russian ambassador to the US Sergei Kisylak last year, where photographers from TASS, Russia’s state-run media agency attended — with all of their electronic equipment — the meeting. (Trump ended up giving up the sensitive intelligence for free.)

Either way, Trump handed the ball to Melania, with instructions to give it to Barron — so the most closely guarded US secrets are probably still safe.

Trump’s UN ambassador pick Kelly Craft grilled on her 300 absences as Canada envoy
Why Little Women and The Witcher are kind of the same
How Snapchat became the forgotten social platform
Sen. Tim Scott on race, police reform, and why ending qualified immunity is a nonstarter for the GOP
THC products were involved in many of the vaping-related illness deaths, officials say
Trump didn’t want an investigation into Biden. He wanted a political show.