Race and football: why NFL owners are so scared of Colin Kaepernick 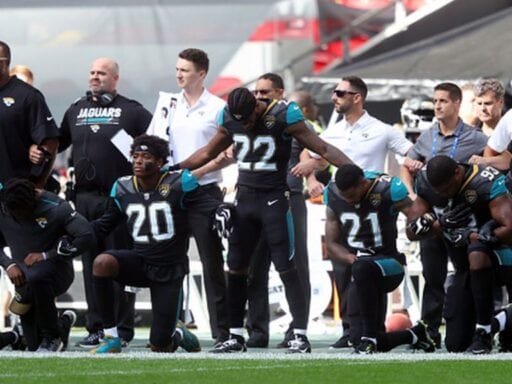 “Sports is the most racially tinged spectacle in modern society.”

[Author’s note: this article was originally published on June 5, 2018.]

President Trump rescinded an invitation to the White House for the Super Bowl-winning Philadelphia Eagles on Monday, claiming it was because they “disrespected” the flag by “staying in the locker room for the playing of our National Anthem.”

As my Vox colleague Jane Coaston noted, no Eagles players stayed in the locker room or kneeled during the anthem throughout the season, but that’s not really the point.

This is just latest episode in a story that began in the summer of 2016, when then-San Francisco 49ers quarterback Colin Kaepernick decided to protest police brutality and racial injustice by taking a knee during the national anthem before games.

Kaepernick’s protest, initially overlooked, ballooned into a massive national story. Soon, other players followed his lead and it became a weekly drama for the NFL. Conservative media pounced on the story, ignoring Kaepernick’s stated intentions and instead accusing him of being unpatriotic and disrespectful of the American flag.

The controversy exploded when Trump weighed in at a rally for Alabama Senate candidate Luther Strange. Before a crowd of (mostly white) Southerners, Trump fantasized about firing the protesting players. “Wouldn’t you love to see one of these NFL owners … say, ‘Get that son of a bitch off the field right now. He’s fired!’”

The NFL protests were always about race in America; Trump’s remarks turned them into a full-blown culture war. Since then, I’ve wondered if there’s something unique about football and the NFL that makes it a hotbed for this kind of racial tension. There’s nothing new about race and politics overlapping with sports, but football seems to be the source of the most controversy today.

I reached out to Ben Carrington, a professor of sociology and journalism at the University of Southern California and the author of Race, Sport and Politics. I asked him why NFL owners (virtually all of whom are white) are so scared of Kaepernick, and why he considers sports the “most racially tinged spectacle in modern society.”

Were you surprised that the Seattle Seahawks, arguably the most progressive team in the NFL, recently canceled its workout with Colin Kaepernick after he refused to say he’d stand for the anthem?

Nope, and it’ll be interesting to see if Seattle can hold on to its reputation as the most “woke” NFL team. My understanding is that the team asked Kaepernick to confirm that he wouldn’t kneel anymore. So they weren’t asking if he was actually planning to protest; they wanted a guarantee that he wouldn’t.

This is extraordinary if you think about it. The team is saying, “We’re going to restrict your rights to speech and your rights to protest, and we need you to confirm ahead of time that you’re not going to speak out on any issues as you have before.”

And this gets to the crux of the matter: It’s about power. Kaepernick has shown agency and power in speaking about political issues, which is far rarer in the NFL than it is, say, in the NBA. So this was about an organization trying to reassert its power over the player.

Race and sports and politics have always overlapped, but, as you just alluded to, there seems to be something unique about football and the NFL that produces this sort of racial tension.

Well, there’s a lot going on here. NBA players have always had more power than NFL players, and there are reasons for that that we probably don’t want to go into here. But it’s worth noting that black NFL players have less collective power than black players in other sports, so that’s obviously a factor here.

But I think football also embodies certain ideals of American masculinity in a way other sports don’t. It’s a violent sport, a physical sport. And it’s replete with all these military metaphors: It’s played on a “gridiron” and there are “blitzes” and “bombs thrown into the end zone” while teams “march” down the field to conquer one another.

So it signifies, in a weird but real way, a certain notion of American militarism, American patriotism, American strength and violence, in a way that a skill game like basketball doesn’t.

“People like to talk about sports as a post-racial space in American society, but it’s probably the most racially tinged spectacle in modern society”

There’s also the fact that the NBA is accepted as “black sport” in a way that the NFL isn’t. Both sports are dominated by black athletes, but the cultural significance of the NFL for white Americans is just different.

Absolutely, and it’s such a crucial point. Roughly 75 percent of the players in the NBA are black, and there are very few prominent white American males in the NBA. The NFL has a majority of black players, but it’s not the same as the NBA. And the quarterback position, which Kaepernick plays, has sort of become the last great position of the “Great White Hope.”

Going all the way back to the early 20th century with the famous black heavyweight champion boxer, there’s always been this element of the American sports world that has longed for a white person to reclaim the mantle of masculinity from black athletes.

Quarterbacks are today’s last Great White Hope. It’s a position that the average white American male can identify with to show some type of sporting supremacy in a landscape where, as that atrocious 1997 Sports Illustrated cover story said, “Whatever happened to the white athlete?”

And no doubt this is something that NFL team owners are acutely aware of.

Unquestionably, and the owners still wield almost all of the power in the NFL. To circle back to your point, the real threat that Kaepernick posed isn’t that he’ll bring more attention to police brutality or racial injustice; it’s that he’ll mobilize players and encourage them to assert their rights in a way that’s similar to the NBA. That’s what really scares the NFL.

I’ve often wondered how different the reaction would have been a few years ago if it were predominantly white players taking a knee to protest something President Barack Obama was doing.

But we kind of know, right? Sean Hannity would be praising them with long monologues about how brave the players are for speaking out. He’d make comparisons to Jackie Robinson, saying this is exactly what America is about. People like him would reverse the narrative and claim that soldiers die on the battlefield so that Americans can exercise their First Amendment rights.

What’s interesting to me is you have people like Laura Ingraham on Fox News telling LeBron James to “shut up and dribble,” and yet Fox News is littered with B-list actors and country singers who are posing as political experts and I don’t hear anyone telling them to “shut up and sing.”

The Fox News audience is attuned to this deeper message, and so I doubt that the hypocrisy is a problem. These are the same people who hear Trump dismiss black NFL players as “sons of bitches” and know exactly what he means.

A big part of the history of US sports is this idea that sports in America are preserved for white men. That this is how sports were founded; this is how they were understood. Anyone who has gained entry into sports who aren’t white men, and that includes women, that includes people of color, had to do so with a kind of deference. And they had to be grateful that they were allowed onto our parks, onto our pitches, onto our courts, because these are our spaces.

And so when Trump says, “Wouldn’t you love to fire those sons of bitches?” he’s imagining a kind of re-segregation. He’s telling people to imagine that they’re one of these owners, that they could fire these “sons of bitches.” You don’t need to understand a ton of American history to recognize the racial politics of this moment.

People like to talk about sports as a post-racial space in American society, but it’s probably the most racially tinged spectacle in modern society.

“People like Laura Ingraham [are] on Fox News telling LeBron James to ‘shut up and dribble,’ and yet Fox News is littered with B-list actors and country singers who are posing as political experts and I don’t hear anyone telling them to ‘shut up and sing’”

Something that I’ve noticed as a white guy who watches a lot of sports is the language commentators and analysts use to talk about white and black athletes. Race is always there, always looming. People call white quarterbacks “heady” or “hard-working” or “coach on the field,” and black quarterbacks are “mobile” or “athletic” or “explosive.” We’ve got all these stereotypes that are constantly reinforced with this coded language.

Yeah, and it’s powerful precisely because we deny that it’s there. We have this strange paradox in which we deny the existence of something which we know is there, and then we enjoy it partly because it’s there.

There’s a great bit by the comedian Bill Burr from a few years ago where he talks about how frustrating it is as a white guy watching how good black athletes are, and the inability of white guys to stay in the NBA. He’s like, “I just want the white guys to get out the way when the black guys are dunking on them.”

I think he taps into something real. He talks about watching the Olympics and just hoping the one token white sprinter can at least come in third. It’s hilarious, obviously, and Bill’s a great comic, but it’s a quite honest reflection of white emasculation on the one hand and loving sports on the other.

And this is part of the reason I think sports concerns and confirms the notion of racial difference more than any other cultural medium.

I assume that’s a big reason why you think we should take sports more seriously as a cultural object and as a space where politics happens.

Yeah, that’s right. I think we have to expand what we mean by politics, because we tend to define it too narrowly. Politics is about Democrats and Republicans and Congress and all that, but it’s also about how we live our lives. It’s about identity.

In that sense, sports and popular culture is inherently political. I remember when Trump made his “sons of bitches” comment, I kept hearing cable news pundits say, “Why can’t we get back to speaking about politics? Why are we talking about the NFL?” I thought they were completely misunderstanding what politics is.

Trump was elected to shore up a lot of anxieties that white people have about the state and direction of the country, and that’s why the issues around Kaepernick and sports are so important. It’s part of who we are as Americans.

The games we play aren’t simply games. They’re also about identity, which is why they’re so popular. And if they didn’t tap into identity, they wouldn’t be so popular.

The mystery behind Trump’s Twitter capitalization habit, somewhat explained
Trump: “We’ll be cutting” entitlement programs. White House: He didn’t really mean that.
We know ocean plastic is a problem. We can’t fix it until we answer these 5 questions.
Should we mourn the death of American cheese? 8 experts weigh in.
While some states try to ban abortion, these states are expanding access
Trump still has a lead among older voters — but Biden is hoping to cut into it