Race is still the central dividing line in the Democratic Party 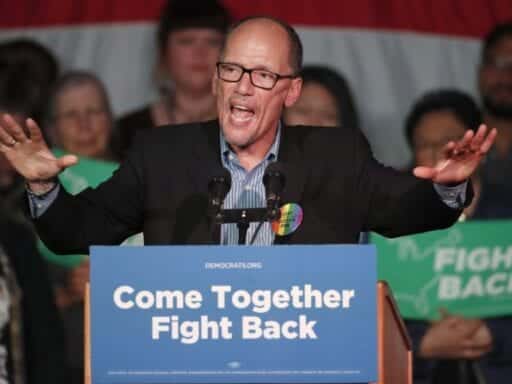 What do Democrats fight about when they’re just fighting among themselves? The same thing the country fights about: race.

I’m just back from attending the Democratic National Committee’s summer meeting in Chicago, where I observed as the party passed a number of reform measures, including a controversial proposal to reduce the power of superdelegates. I tweeted a bit about this here but wanted to elaborate.

Race has been one of the central features of internal Democratic Party debates for at least half a century. When the McGovern-Fraser commission met to discuss ways to reform the party in the wake of the 1968 election, one of the central questions was racial representation. The party approved an affirmative action plan at that time to promote the numbers of African Americans, women, and other underrepresented groups within the party’s ranks. When the party endured losses at the presidential level in 1972, 1984, and other years, many within the party blamed the influence of such “special interests,” whom they accused of alienating white working class voters.

As the events of this most recent meeting of the DNC showed, questions of race and identity are still very much a live wire in intra-party disagreement. We saw this particularly in the debates over the proposal to change party rules regarding superdelegates.

To briefly summarize, one of the lingering concerns from the 2016 presidential nomination cycle was the power of superdelegates, the Democratic elected officials and DNC members who automatically become national convention delegates. Bernie Sanders and his supporters repeatedly argued throughout 2016 that superdelegates (the party prefers to call them “automatic” delegates now) gave Hillary Clinton an unfair advantage, tilting delegate counts in her favor even in states where he did well in the primary or caucus. The Unity Reform Commission, consisting of members appointed by Sanders, Clinton, and DNC Chair Tom Perez, convened in 2017 to discuss, among other things, ways to reform the superdelegate system. The party’s Rules and Bylaws Committee then took up this topic and produced the proposal that the DNC voted on.

The reform allows superdelegates to continue to have their automatic status, but to lose their first vote on the convention floor. If no presidential candidate has a majority of delegates sewn up on the first vote (which has not happened in more than half a century), then superdelegates can vote on subsequent ballots.

As many noted, this was a remarkable reform, in that it represented party leaders reducing their own influence. Don Fowler, the former South Carolina governor and DNC chair and a leader of the anti-reform contingent, noted, “There is not a membership organization in the world that systematically cuts off its leadership from the most sacred decisions the organization makes.”

This was, in many ways, a reasonable compromise for Sanders supporters (who were eager to strip superdelegates of power) and some Clinton supporters (who were eager to see the party unified and to not have the legitimacy of future nominees questioned). It gave away a power that superdelegates realistically never had the legitimacy to use — the power to tip a close nomination race away from the preferred choice of the party’s voters. Yes, superdelegates still retain their informal powers (their visibility, their endorsements, etc.) to influence a race, but the idea that they were ever going to vote to change a nomination result on the convention floor always seemed highly unlikely.

But quite a few DNC members were upset with this “unity” proposal. I’m painting with rather broad strokes here, but it was African-American DNC members who were the strongest opponents of the proposal. Throughout the year, members of the Congressional Black Caucus — basically all of whom are Democratic superdelegates — and other African-American party leaders expressed strong concerns that they were being, in their words, “disenfranchised.” Many saw no need to give up their floor voting rights to appease the concerns of a largely white and young group of progressives whom they saw as being relatively new to the party. They raised concerns about the declining importance of African-American voters in general and those African-American party members in the room specifically.

Rhetoric along these lines got particularly heated during the recent DNC meeting. DNC Chair Perez opened the executive committee meeting on the first day seeking to project an image of unity and to mollify concerns that members were losing their power. “People misinterpret the source of their power,” he said. Superdelegates aren’t important because they have a floor vote, but because they’re recognized political organizers and leaders in their state.

Sanders supporters and other critics of superdelegates got a non-trivial symbolic victory, and Chair Perez got the demonstration of unity he wanted. But it came at a cost.

Perez and others in the party’s leadership pressed to pass the proposal. They developed a reportedly sophisticated vote whipping organization, counting supporters and opponents and fervently calling and emailing undecided members. Fowler and others developed their own organization to counter these efforts. (See Dave Weigel’s account for some good details on these efforts.)

Many concerns about the reform were raised at the meeting of the Black Caucus. One caucus leader claimed that an African American voting for the measure was like a runaway slave voting for the Fugitive Slave Act. Another leader explained to me that it took a long time and a lot of hard work for African Americans to rise to their numbers and importance in the party. She said that it’s an open party, and people are welcome to join in and work on some campaigns and work their way up, but the reform supporters were, in her words, skipping their place in line.

In the end, the chair and the reform’s supporters simply had the numbers to prevail. When it became clear in the general session that they could not stop the effort, reform opponents withdrew their opposition and offered to vote for all the changes by acclamation. The session ended on a note of unity, although not, as the chair noted, unanimity.

It’s fair to ask just what effect this whole effort will have. I noted in this piece last winter that these sorts of reforms (if not these precise ones) would tend to give an edge to a presidential candidate with less history in the party and with more outsider support. If not Bernie Sanders, perhaps someone like him. But my expectation is that the actual influence will be minor. Again, superdelegates have never actually tipped a nomination, at least through their floor votes.

Meanwhile, the Sanders supporters and other critics of superdelegates got a non-trivial symbolic victory, and Perez got the demonstration of unity he wanted. But it came at a cost. A lot of prominent African Americans in the party clearly felt side-lined and insulted.

In many ways, this comes back to what people believe was the reason for the party’s loss in 2016. For those who believe that the problem was a lack of unity and ongoing concerns about Hillary Clinton’s legitimacy as the nominee, this reform package should appear to help. For those who believe that the problem was insufficient enthusiasm from the party’s African-American voters and activists, this reform package may appear as harmful. The effect is largely symbolic, but symbols, particularly those related to identity, can be vital to keeping a party together and competitive.

Rise of Skywalker’s huge opening weekend was still a big miss by Star Wars standards
Jeffrey Epstein is dead. His story isn’t over.
How the media should respond to Trump’s lies: State of the Union edition
Why Yeezys, a brand based on exclusivity, are suddenly so easy to buy
Facebook is finally banning white nationalist content
Celebrity endorsements used to be expensive. Now any company can hire an A-lister.