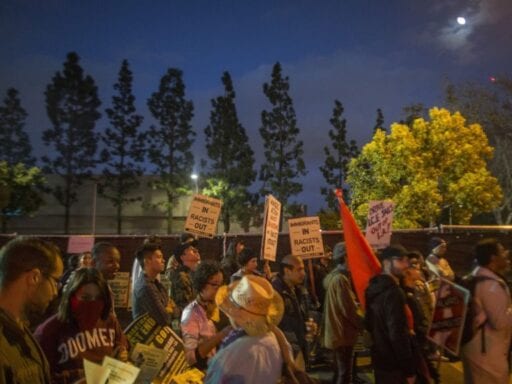 Neither social intolerance nor inconsistent support for democratic norms, however, is particularly new.

In fact, the one constant thread woven throughout American democracy is that white Americans’ track records regarding matters of racial and democratic equality is poor. To what extent, then, is prejudice related to negative assessments of democracy? Analyzing World Values Survey data from 1995 to 2011, our recent working paper finds a worrying negative relationship between social intolerance and support for democracy.

Linking social (in)tolerance to attitudes about democracy draws from what social and political psychologists know about group identification and how group identification leads to discrimination against out-groups. First, the emergence of prejudice — like the belief that a member of an out-group is lazy, that integration is bad, or that immigrants are gang members — occurs when a pressing social situation like an election or economic crisis emphasizes distinctions between groups.

Second, members of a group need to attach pride or significance to their sense of group belonging. When this occurs, the social environment is restructured into a simplistic arena of opponents and allies.

Race has long been a — if not the — social and political categorization within American society. Opposition to the extension of the Voting Rights Act, support for cruel immigration policies, and negative responses to Muslims after 9/11, for example, are inexorably rooted in these intergroup dynamics. Throughout American history more generally, the extension of civil rights and access to levers of power in American politics have been grounded in race.

If social intolerance involves high levels of expressive identity, then people who feel threatened by racial or ethnic diversity ought to feel less positively toward systems of governance that extend political access to these individuals. Thus, white Americans who exhibit social intolerance may actually prefer undemocratic alternatives because democracy provides the political pretext for persons belonging to “undesirable” out-groups to accumulate resources or power that undercut the perceived well-being of the intolerant person.

We investigated World Values Survey (WVS) data covering the period 1995 to 2011 to explore the relationship between social intolerance and democracy. (As such, our analytical window of time predates the election of Donald Trump, but not the social forces that may have propelled him to the White House.) To construct a measure of social intolerance, we used the WVS’ “least-liked” groups instrument, which asks survey respondents whether or not they would not want a person from a variety of groups as a neighbor.

As the figure below indicates, most people possess relatively benign attitudes toward various groups of interest. However, among white Americans in our full sample, we calculate that roughly 17 percent of persons listed that they would not want a member of a different race, or an immigrant/foreign worker, or individuals who spoke a different language as a neighbor. (By 2011, the share of intolerant persons increased to almost a quarter of all white respondents.) This group of persons comprise our group of “socially intolerant” people.

Using a simulation-based analysis, we estimate that social intolerance increases the odds of an anti-democratic orientation by an average of about 10 percent across the three dependent variables. In 3,000 total simulations, a socially intolerant person on our measure is more supportive of autocratic alternatives than a socially tolerant person 100 percent of the time.

Finally, because past research alleges that education should encourage good citizenship by emphasizing the importance of participatory behaviors and the value of reasoned debate, we tested to see whether a college education, for example, undercuts the negative effect of social intolerance on support for democracy. In fact, it seems to amplify it. We speculate that well-educated persons may be sensitive to the idea that democracy equalizes access to power, which broadly matches other research that shows that education may strengthen racial judgments.

Democracy isn’t living up to its billing

In theory, democracy is designed to safeguard the rights of minorities. Yet because the integrity of these protections relies on the strength of social norms of tolerance and political values that prevent illiberal behavior, it should come as no surprise that democracy often fails to live up to its billing in practice. American history, after all, is replete with human rights catastrophes.

Whether social intolerance causally degrades support for democracy is something we hope to answer via survey experiments. However, our analysis establishes a clear and robust connection between social intolerance and anti-democratic orientations among white Americans — a relationship that manifests a full 20 years prior to Donald Trump’s callous rhetoric linking words like “animals,” “thugs,” and “rapists” to immigrants.

The policies we have observed since Trump’s inauguration, the human rights indignities that migrants and their children are suffering at the hands of the US government, and the support that Trump still enjoys from his core voters, may well be an ugly manifestation of the argument we provide. In some sense, this social intolerance is a rejection of the struggle to maintain “full” democracy.

Nicholas Davis is a Research Scientist at Texas A&M University. He studies the sorting of political and social identities and the popular meanings citizens associate with democracy. Steven Miller is an Assistant Professor at Clemson University. His research focuses on international conflict, democratic peace and conflict behavior, and public opinion.

Why Covid-19 is so dangerous for older adults
A political scientist explains why the GOP is a threat to American democracy
Corruption, fake news, and WhatsApp: how Bolsonaro won Brazil
Meet Jaime Harrison, the leading Democrat trying to unseat Lindsey Graham in South Carolina
Paul Ryan calls for Maxine Waters to apologize: 'There's no place for this'
Super Tuesday 2020