Rainbow Rowell’s Carry On deconstructed Harry Potter. Wayward Son is what comes next. 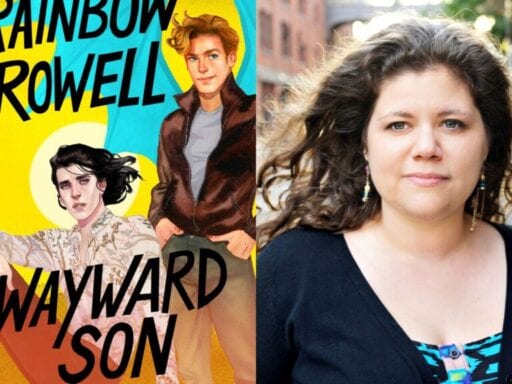 This sweetly romantic YA romp isn’t as subversive as its predecessor. It’s still enormous fun.

There was something incredibly thrilling about reading Rainbow Rowell’s Carry On when it came out in 2015. It was like watching a pebble hurling itself against a boulder of enormous strength and solidity and then seeing the boulder move just a little bit.

Carry On is so intertextual that in many ways it reads like fanfiction, only fanfiction granted the weight and cultural force of original fiction. It feels subversive just by existing. That’s what makes it thrilling.

Wayward Son, the Carry On sequel that comes out this week, is not quite so thrilling as its predecessor. But it’s still incredibly fun.

Carry On is ostensibly YA fantasy, but it’s a little more intertextual than you might gather from that description. It draws from Rowell’s 2013 novel Fangirl, about a college student named Cath who’s obsessed with writing fanfiction about a thinly disguised Harry Potter analogue, Simon Snow. Fangirl is interspersed with excerpts from both the “official” Simon Snow books of JK Rowling analogue Gemma T. Leslie, and from Cath’s fic, “Carry On, Simon.” But Rowell’s Carry On isn’t quite either a Gemma T. Leslie Simon Snow book or Cath’s fic or Harry Potter fic, exactly.

Instead, Carry On takes place in the Simon Snow universe that Rowell established in Fangirl. And it’s written with Rowell’s sensibility, which is one steeped in fanfiction: filled with simultaneous affection for its source material (which is YA fantasy in a broader sense and Harry Potter in particular) and a desire to critique it.

Fanfiction recognizes that, as a genre, YA fantasy works with some bizarre tropes, and that readers mostly accept those tropes without fussing too much over what they might suggest about the characters involved because we can understand that the tropes are necessary to keep the story functional. But because fanfiction doesn’t have to worry about conventional story structure — because the story is taken care of by canon — fanfiction has the luxury of picking apart those tropes without destroying the stories built on top of them.

In the Harry Potter books, Harry’s mentor Dumbledore is constantly sending 11-year-old Harry to do battle with unspeakable evil because that’s what the tropes of the genre demand. But fanfiction has the space to ask what kind of person would routinely send a child to battle evil and what kind of person would groom a child to grow up into someone willing to die for their cause.

In Harry Potter, Harry’s inevitable happy ending is represented by his love interest Ginny, who it’s clear from book one that he will eventually marry because the genre requires that Harry have a happy ending waiting in the wings for him. But fanfiction has the space to ask why Harry would be so committed to the idea of ending up with someone he spends very little page time with and whether it might be more interesting to explore Harry’s relationship with someone else — for instance, his school rival Draco Malfoy — in Ginny’s place.

In Carry On, all the questions that fanfiction has been asking for decades come to the fore. Simon Snow’s mentor the Mage starts the book as a benevolent father figure to Simon, but he gradually grows more and more sinister as Simon himself begins to wonder what the Mage has been grooming him for. Simon begins the book pining for blonde Agatha, whom he believes to be his happy ending, but as he keeps getting distracted from her by thinking about how much he hates his school rival Baz (who is maybe a vampire!), it becomes clear that Simon’s true interests lie elsewhere.

In some ways, Carry On didn’t do anything that really good fanfiction hasn’t done a thousand times before it, except change a few names and details and get published as a conventional book instead of online at Archive of Our Own.

But in other ways, just the fact that Carry On was published as a conventional book and not a fic gave it a unique power. Reading Carry On feels like watching fanfiction acquire the heft and force of canon before your very eyes.

Wayward Son isn’t as weighty as Carry On. It’s still fun to read.

By its very nature, Wayward Son was bound to be a slighter book than Carry On is. It can’t pull off the same trick that Carry On did because that trick only works once. It can’t turn fanon into canon for the first time all over again.

As Wayward Son begins, Simon and Baz, together at last, have begun a life of not-so-blissful domesticity, along with Simon’s Hermione-esque best friend Penelope. Simon knows that he should feel good about his life: He defeated the villain at the end of Carry On, after all, which means that now is when his happy ending should be starting.

Except Simon is at loose ends. After spending his childhood fighting the Mage’s wars, he doesn’t know how to exist in the world without a bad guy to fight. He also still has wings and a tail — but no magic — after what happened at the end of Carry On.

All things considered, Simon is pretty depressed. And he’s so riddled with self-loathing that he can’t even stand to look at Baz, which only makes things worse.

That’s when Penelope suggests a change of scenery. Simon’s ex Agatha has moved to California, but she seems to be in some kind of trouble. So obviously the solution is for all three of them to fly over from London to America and set off on a road trip full of adventures to save her!

I won’t spoil what follows, except to say that it involves a Renaissance Faire, a skunk with a gun, and the vampires of Las Vegas. (Also flowered Gucci suits and making out in the back of a pickup truck underneath the stars.) But it’s enormous fun to read, a delirious candy-coated romp of a book that you can devour in a single evening.

In some ways, though, Wayward Son feels almost too fun to read, or at least too fun to be fully satisfying. I kept finding myself wishing that Rowell had learned from the best kind of fanfiction, stopped fretting about the plot, and taken the time to really wallow in her characters’ emotions. The only thing is I think she might not be able to, and I think that might be the biggest downside of writing this kind of fanon/canon hybrid.

One of the things that makes fanfiction almost uniquely enjoyable to read is that it is purely driven by character and relationships. It doesn’t care about plot except insofar as the plot can illuminate its characters and how they feel about each other — and it has the luxury of weighing character over plot because it doesn’t need the plot to build the readers’ investment in the characters.

With fanfiction, the readers are already invested in the characters when they open the fic. Their investment is thanks to the source material, and it’s why they’re reading fanfiction in the first place. And that’s one thing that Rowell’s Carry On books can’t quite carry over.

Wayward Son is pretty close to being Harry Potter fanfiction, and Simon and Baz are pretty close to being Harry and Draco, but they’re not exactly the same people. They’re characters based on the same archetypes, but the specifics are different enough that Rowell can’t just draft off her readers’ memories of Harry and Draco playing Quidditch against each other to inform the way we read Simon and Baz’s relationship.

Instead, she has to build the rapport between Simon and Baz from scratch and then she has to earn readers’ investment by putting them into one life-threatening situation after another. She doesn’t get to take the time to really dig down into the emotional depths of their relationship in the way that a fic writer would, because she’s too busy handling plot concerns that a novel has, but that a fic writer doesn’t really have to worry about.

But that doesn’t mean it’s pointless. Wayward Son is a joyous celebration of a book. It’s an ice cream sundae. Go ahead and eat it up.

4 false claims in under 30 words: Kevin McCarthy’s IG report tweet is an exercise in gaslighting
Congress is close to a deal on a roughly $450 billion small-business funding bill
Why we kiss
Olivia Nuzzi and Sam Sanders talk about the final days of the Trump White House
What does “vote” merch even mean in 2020?
Americans want a woman to take down Trump. Just not in the election.