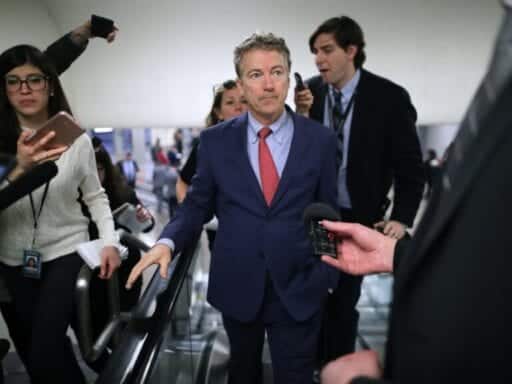 Share
Loading...
Sen. Rand Paul (R-KY) talks to reporters as he heads to the US Capitol for the weekly Republican policy luncheon March 05, 2019, in Washington, DC. | Chip Somodevilla/Getty Images

Many Senate Republicans disagree with the president. But they won’t be voting on a resolution that says so.

“I object to this resolution because it does nothing to fix this problem,” Paul said, while pushing his own bill to stop arms sales to Turkey. Senate Minority Leader Chuck Schumer had called for the Senate to consider a vote on this resolution, which passed the House with a bipartisan 354-60 majority on Wednesday, with the goal of sending Trump a message about Congress’s disapproval of his recent actions.

“Because of the president’s precipitous action … ISIS prisoners are escaping,” Schumer said in a floor speech on Thursday. “The president’s incompetence has put American lives in danger.”

Schumer is far from the only one who’s criticized Trump’s decision, which many Republicans also view as a betrayal of the United States’s Kurdish allies in the region, who’ve been forced to confront a Turkish military offensive. Despite their outcry on the subject, it’s still not clear just how much Republicans are willing to clash with the president explicitly on this issue. Senate Majority Leader Mitch McConnell is unlikely to allow the non-binding resolution condemning Trump to come to the floor, and he has previously said it has some “serious weaknesses.”

Sen. Lindsey Graham (R-SC), a prominent Trump ally, has questioned the president’s efforts in Syria and is also pushing his own legislation alongside Sen. Chris Van Hollen (D-MD), which would impose stricter sanctions on Turkey that target military transactions and energy resources. Paul, meanwhile, is taking specific aim at arms sales.

The congressional backlash to Trump’s decision began last week when he announced that he’d be withdrawing American troops from the region, prompting concerns that the US was abandoning its Kurdish allies and offering an opening for the Islamic State. Since the decision, ISIS members have begun to break out of prisons in the region.

The disagreement between Trump and Congress on this subject culminated in an explosive meeting between lawmakers on Wednesday when Speaker Nancy Pelosi stormed out in concern. “We will come back to this issue; it will not go away,” Schumer said Thursday.

Vice President Mike Pence and Secretary of State Mike Pompeo met with Turkish President Recep Tayyip Erdoğan on Thursday and announced a temporary ceasefire of the attacks in Ankara, Turkey. But there are a number of unanswered questions about what it means for the Kurds’ long-term security and broader stability of the region. In the meantime, many members of Congress are focused on keeping the pressure on Trump, even if the Senate won’t vote on a non-binding resolution.

Supernatural’s 15th season will be its last
A coronavirus case at CPAC undercuts Trump’s message that Covid-19 is under control
Lovecraft Country’s latest trailer is unexpectedly timely — and even more terrifying
Vox Sentences: California, burning in the dark
The acting Pentagon chief has yet to say whether Trump’s border wall is militarily necessary
Congress finally passes $19 billion in disaster aid