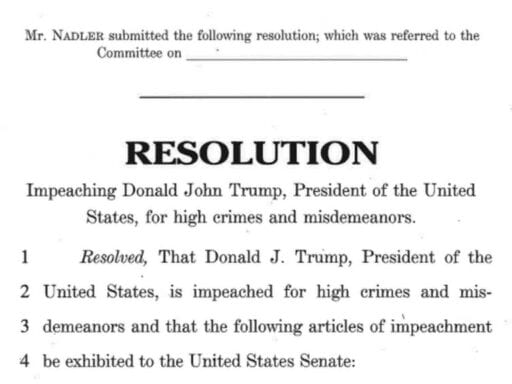 There are two articles, one on abuse of power, one on obstruction of Congress.

Democrats in the House of Representatives released the full text of the two articles of impeachment they will introduce against President Trump on Tuesday.

The first article is about “abuse of power” and focuses on the underlying facts of the Ukraine scandal — it alleges that Trump improperly pressured the Ukrainians to investigate his political rival Joe Biden, by withholding both a White House meeting and military aid from them.

The second article, on “obstruction of Congress,” is about Trump’s attempts to stonewall the impeachment inquiry, by instructing witnesses not to testify and government agencies not to comply with subpoenas.

An article of impeachment is essentially a “charge” against the president that the House of Representatives is considering approving. The final House votes on impeachment will be a yes or no vote on each article. If even one is approved, Trump is impeached — and the Senate will then hold a trial to determine whether to actually remove him from office.

Before these articles of impeachment make it to the House floor next week, the Judiciary Committee will vote on both this week, and is expected to approve them easily. You can read the full text of each article below, or at this link.

The Hunger Games is getting a prequel that centers on the villain: a young President Snow
The world’s longest nonstop flight now lasts 18.5 hours
Game of Thrones: Does Arya’s “green eyes” prophecy mean she’ll kill Daenerys?
This video clip shows how Trump defenders have dramatically moved the misconduct goalposts
Tech billionaires are funding the Democratic Party whether Democrats like it or not
Andrew Yang told Asian Americans to prove their Americanness. Here’s why that’s wrong.