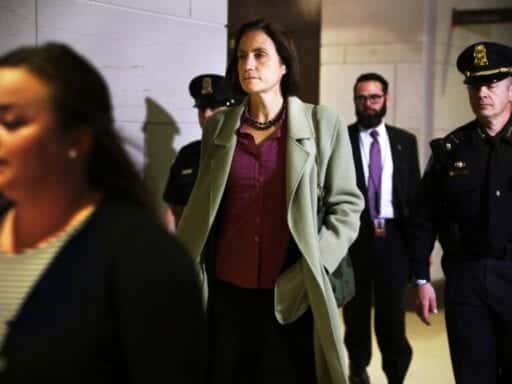 Share
Loading...
Fiona Hill, former deputy assistant to the President and Senior Director for Europe and Russia on the National Security Council staff, arrives to review transcripts of her deposition with the House Intelligence, Foreign Affairs and Oversight committees at the US Capitol on November 4, 2019. | Alex Wong/Getty Images

Fiona Hill reminds Republicans that Russia — not Ukraine — meddled in 2016.

In her opening statement to impeachment investigators, former National Security Council official Fiona Hill excoriates Republicans for indulging in unsubstantiated conspiracy theories about Ukrainian interference in the 2016 presidential election — the same ones President Donald Trump tried to leverage the Ukrainian government into investigating.

“Based on questions and statements I have heard, some of you on this committee appear to believe that Russia and its security services did not conduct a campaign against our country and that perhaps, somehow, for some reason, Ukraine did,” Hill says in her Thursday statement. “This is a fictional narrative that has been perpetrated and propagated by the Russian security services themselves.”

She adds, “I refuse to be part of an effort to legitimize an alternative narrative that the Ukrainian government is a US adversary, and that Ukraine—not Russia—attacked us in 2016.”

The US intelligence community’s consensus conclusion is that Russia interfered in the 2016 on Trump’s behalf. That conclusion was further bolstered by the work of Special Counsel Robert Mueller. But Trump, in an apparent effort to undercut the notion that he received help from a foreign adversary, has repeatedly tried to draw Russia’s role into question, and recently has embraced a conspiracy theory that the hacks of Democratic targets during the campaign were not the work of Russia, but were an “inside job.”

Hill, however, is having none of that.

As my colleague Andrew Prokop detailed following Hill’s closed-door testimony earlier this month, she provided impeachment investigators with a detailed account of a key July 10 meeting in which she claimed US Ambassador to the EU Gordon Sondland “blurted out” that there was a quid pro quo — that new Ukrainian President Volodymyr Zelensky’s desired White House visit was conditional on his government agreeing to conduct investigations of a company Joe Biden’s son sat on the board of, and purported Ukrainian interference in the 2016 election. That July 10 episode memorably ended with then-National Security Advisor John Bolton alluding to the quid pro quo and telling Hill, “You go and tell [NSC lawyer John] Eisenberg that I am not part of whatever drug deal Sondland and [acting chief of staff Mick] Mulvaney are cooking up on this.”

In her opening statement, Hill — who officially retired in September — emphasizes just how absurd the Ukrainian election interference narrative pushed by Trump and Rudy Giuliani is.

“In the course of this investigation, I would ask that you please not promote politically driven falsehoods that so clearly advance Russian interests,” she says. “If the President, or anyone else, impedes or subverts the national security of the United States in order to further domestic political or personal interests, that is more than worthy of your attention.”

Hill also highlights that Russian election interference is an ongoing concern — something US security officials have pointed out as well.

“The impact of the successful 2016 Russian campaign remains evident today. Our nation is being torn apart. Truth is questioned. Our highly professional and expert career foreign service is being undermined. US support for Ukraine … has been politicized,” she says.

You can read Hill’s full opening statement below.

The hearing is expected to begin Thursday at 9 am Eastern, you can watch it on C-SPAN or on Vox’s Facebook and Twitter.